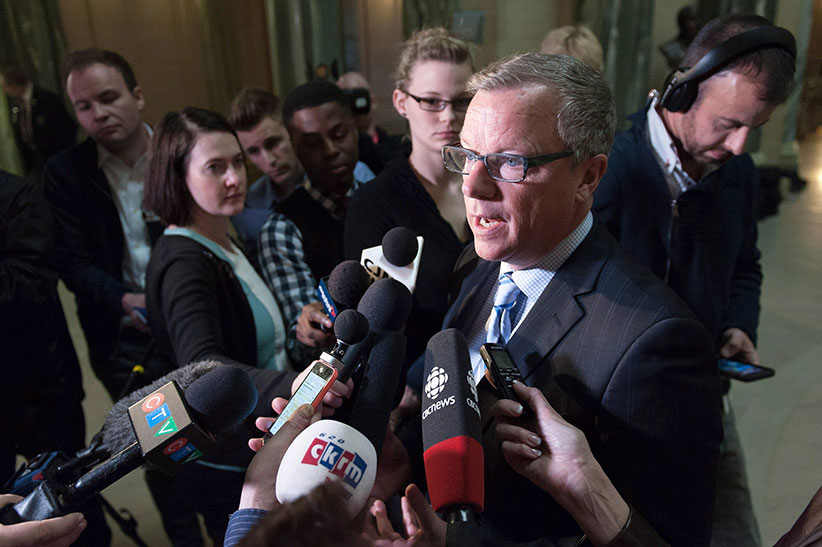 Brad Wall speaks to media one day after the Saskatchewan Party’s electoral victory at the Legislative Building in Regina, Saskatchewan on Tuesday April 5, 2016. Michael Bell/CP

According to your April 18 editorial, Prime Minister Justin Trudeau should be cautious about deleting too many of Stephen Harper’s policies, because the Saskatchewan election results prove that “many voters still approve of . . . Harper’s legacy.” We’re talking about roughly 270,000 people who voted for the Saskatchewan Party, in a country where more than 17 million votes were cast in the last federal election! You just keep deleting, Mr. Trudeau.

In your April 18 Editorial, you stated that “the Trudeau government’s first budget offers much to worry about… the elimination of sensible increases in the retirement age [from 65 to 67 is] chief among those concerns.” Really? I am 52. Since being laid off in 2010 after 30 years of employment, I do not have a full-time job, benefits, a company pension plan, and don’t save regularly for RRSPs. When the Harper government decided to raise Canada’s official retirement age to 67, I was disheartened. At this rate, I probably will not be able to afford to take retirement at age 65. In fact, I will most likely be working until age 70, 75 or even 80.

I take issue with Gloria Steinem’s contention that “women all over the globe . . . being forced to have children they don’t want” is a “root cause of global warming” (The Interview, April 11). Each Westerner has an ecological footprint that is a hundred times that of the average person in the developing world. We are the cause of global warming.

I am amazed at the ignorance and offensiveness of your April 11 Editorial, which takes a swipe at tax credits offered to volunteer firefighters. Many communities would have no fire protection were it not for volunteer firefighters. Many communities have a combination of career firefighters and volunteers; this saves the community money. A tax benefit for a volunteer firefighter is not cosmetic; it is compensation. All firefighters risk their lives during a response to an emergency and then, upon arrival when they must sometimes enter a burning building. Very often these emergencies are the result of a person’s carelessness or ignorance. Firefighters do not question how or why the fire has occurred, they put the damn thing out and then investigate the cause. Therefore to the author I offer this comment; you are a thoughtless idiot and a mental midget. I suggest that you try entering a burning building; then defend your criticism.

As a teacher, I am utterly galled at the April 11 Editorial that attacks educators. You begrudge my wage, the vacation time I get, and now a credit that I receive for investing in the children whom I am entrusted with for 10 months of the year. I invest a great deal of money into the lives of my students. As I went through my bills for last year, I came across receipts for: art supplies, apps for the iPad that I use in the classroom with the projector, stopwatches, mirrors, toothpicks, marshmallows, snacks for special occasions, pizza and other rewards, ink cartridges, DVDs, posters, easels and student support guides. Usually, I am not reimbursed for any of this.

I could not believe that the article “A first lady of firsts” (International, April 18), about Melania Trump, made it to print. In this day and age, do your editors actually approve articles stating that women of a certain nationality “aren’t attractive”? This whole article was shameful and insulting to all Slovenians. All it did was reinforce stereotypes—no, not all Slovenians play the accordion or eat fatty sausages—and degrade a nationality. I believe an apology is in order. I can escort your writer, Allen Abel, around Slovenia to make him aware of the intellectual level of the populace, the beauty of the people, the wonderful cuisine, the remarkable achievements of noteworthy Slovenians, and the rich culture that exists there. Then he could write a little more intelligently and with greater insights—and he could pick up the tab.

Slovenia is stereotyped as a nation of accordion-playing, potica eating and slivovitz-drinking simpletons. No mention of Slovenia as a small but strong and peaceful nation, which has managed to be financially independent, politically neutral and democratically steadfast in an often-troubled part of the world. I am proud of my Slovenian heritage and dismayed at the superficiality of your journalism.

Religious studies professor Bart Ehrman’s conclusion (“Did Jesus really exist?” Society, April 4) that research on the operation of memory throws real doubt on the existence of Jesus Christ should surprise no one. The Gospels themselves are very much in the manner of similarly ancient Greek or Roman biographies, written to present notable lives for admiration and emulation. I know one clergyman who chided believers in the literal truth of the New Testament for not having a wider outlook. One would never realize from his preaching, however, that the Gospels are not literally true but rather a deeper reflection of a higher reality revealed to the wise and the learned. Maybe that is why so much preaching today has so little effect.

While researchers might conduct modern memory experiments and find that stories change substantially, they lack events with the intensity of the Gospel stories. When researchers can provide a person who has risen from the dead, they might find that memories are significantly sharpened.

I know Bart Ehrman’s scholarship very well, and respect its sincerity. But the testimony of Paul deserves much more attention than is awarded to him in Ehrman’s argument. He reminds the Christians in Corinth that Jesus appeared to him, and given the way this event upended Paul’s life, it was not the product of a foggy memory. As for the absence of miracle stories and other narratives, Biblical scholars note that Paul’s letters are focused on problem-solving for communities already formed for some time. We cannot conclude that in his proselytizing, he did not draw on other narratives. We simply do not know. Interestingly, Paul’s frustration in his self-defence as a true apostle affords another proof of the existence of Jesus. For the Jerusalem Apostles, Paul could not rightly designate himself as an Apostle because he had not been chosen by Jesus during his lifetime. This possessiveness of the Apostles in Jerusalem testifies to their pride in being selected and mandated by Jesus before his death. Finally, the martyrdom of Peter and Paul testifies to their vivid encounter with Jesus, who they would not deny.

Peggy Orenstein, author Girls & Sex (The Interview, April 4), thinks sex is just something we do: for fun, pleasure, control, under pressure, because everyone is doing it! But I doubt anyone will ever really experience joy in the act of having intercourse until they experience that which comes from actually giving yourself to your spouse in complete surrender and mutual self-giving in the committed exclusive relationship of a true, loving marriage. True love begets self-giving, acceptance of self and other, true caring and concern for the other, trust, and myriad other emotions and feelings. I experienced this with my husband of 36 years before I lost him to Alzheimer’s disease. Making love was so special and utterly fulfilling that our emotions would be at the highest peak imaginable. This could never happen in casual sex. Orenstein even states that it is ridiculous that girls are having sex and not enjoying it. What a concept! Maybe it’s because they know there is something better, but they’ve been told to accept the fleeting pleasure for the real thing.