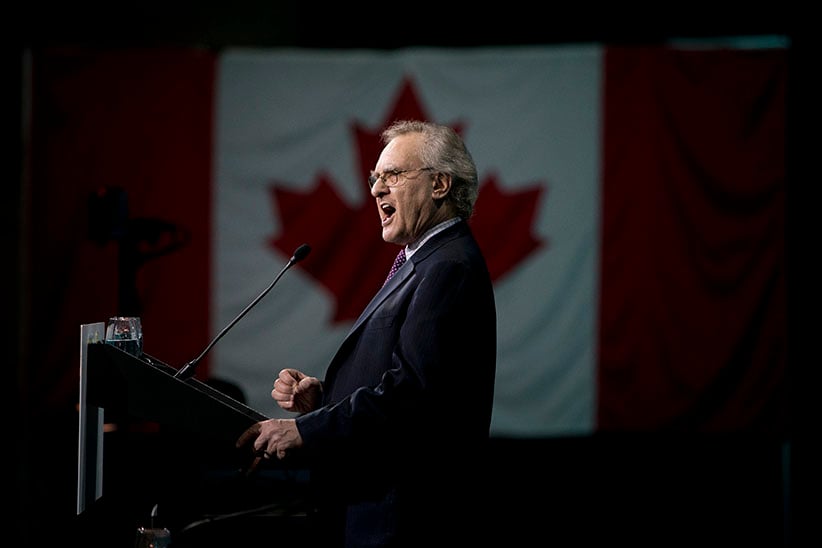 The NDP have no heir apparent to Tom Mulcair (“Hard left turn,” National, April 25). But if the Reform party was able to merge with the PCs, with former Reformers holding the top spot of party leader—and eventually prime minister—surely the NDP can follow lockstep with the Green party under Elizabeth May. They will have one additional seat guaranteed in the House of Commons, an established leader, and also have absolutely no chance of forming the Opposition, never mind the government, which seems to be what they want anyway. Problem solved!

Avi Lewis (“ ‘This is an ideological battle,’ ” National, April 25) says that he does not know what a complete shift to renewable energy will cost, but he knows “the money is there.” That is the attitude of left-wing ideologues who grew up with well-off parents and devoid of experience in productive careers. Most Canadians know we need to work hard to meet our family’s needs and must know what we will get for our money before we part with it. That is why Lewis and company have no chance of gaining power and implementing their hare-brained schemes.

The concept that a massive shift to renewable energies can power Canada is a myth. We cannot power the world or Canada on renewable energies. Wind energy powered ships until 200 years ago, when steam engines came along, fuelled by wood, then coal and now oil and uranium. Wood was becoming scarce, but then coal replaced firewood and saved the remaining trees. We burned whales for lighting; as whales became scarce we turned to petroleum that saved the remaining whales. There is nothing that has had such a large positive effect on our lives than oil, coal and natural gas. Whenever we try to make public policy based on myths, we hurt our people.

Each railcar of oil carries approximately 700 barrels of oil. The railroads are now allowed to run trains over 100 cars. The refineries on the East Coast require more than 100,000 barrels per day to operate efficiently. If they can’t get it from Canada, they get it from the Middle East, Venezuela or the U.S. Our Prime Minister distinctly said that oil by rail is dangerous. If the NDP were to support only the Energy East Pipeline—not one to the West Coast, not Keystone XL—they could say: we understand that we can’t just switch off our carbon-based economy; we want to eliminate oil by rail; we want to support reﬁning Canadian oil in Canada; we remain opposed to any other pipelines; we will insist on the utmost controls and safety features on this pipeline; we will remain totally supportive of alternate energy projects and scientific investment in replacing our carbon economy. This would prove the NDP does not have its head in the sand and is willing to work to help Canada’s economy.

It is interesting that Mao Zedong started the Great Leap Forward in China (1958-61) that sadly led to the death of an estimated 45 million people, while Avi Lewis’s Leap Manifesto will lead to the death of only a single political party and not nearly as much sadness.

I agree with Scott Gilmore’s prescription for ending the enduring national nightmare that exists on remote First Nations reserves (“The only end to a national nightmare,” April 25). I am very sympathetic to Joseph Boyden’s passionate defence of the healing power of the old ways (“Save the children,” National, April 25). But healing centuries of intergenerational trauma also requires modern infrastructure, and it is difficult to see how this can be provided to hundreds of isolated communities without an economic base. The current government seems to have the will to solve these problems. Let us applaud their efforts. It is time to stop the waste of life, both in human terms and economic terms, that constitutes reality for those whose ancestors were the original inhabitants of this great country.

With the commodity downturn and increased environmental vigilance, resource companies are leaving the north. How then can these small communities ever expect to have educational, recreational and medical resources comparable to more densely populated southern Canada? With the absence of opportunity, there is addiction and hopelessness. First Nations youth deserve better, and improved mental health will not come through continued isolation and segregation. It is time to relocate.

If you replaced the citizens of Attawapiskat with any single one of us—regardless of race, creed, colour, or education—and sent us to live isolated from all economic opportunity, we would eventually find ourselves in the exact same situation.

I recently walked along the shores of Couchiching Lake not far from Orillia, Ont., and came across a statue of Samuel de Champlain, with a plaque commemorating the advent into Ontario of “the white race.” I stood for several minutes dazed by what was before me: two Indigenous hunters cowering at the feet of a Christian missionary holding a Bible in one hand and a cross in the other. The missionary appeared as though he might strike one of the hunters; his expression was one of disdain and power, even hatred. After reading Joseph Boyden aptly describe 140 years of cultural genocide, I can’t help but wonder if the genocide of our First Nations people extends far beyond this period of time.

We can build state-of-the-art schools and hospitals in Attawapiskat, but the question remains: how do we get teachers and doctors to live there?

What would a recent refugee from Syria make of the Attawapiskat situation? These Syrians have left their homeland under dire circumstances, arrived in a country with a different culture and language than their own, and they are homesick for the way things were not so long ago. Will 20 per cent of them attempt suicide in the next 25 years? It is actually very likely that these refugees will try to maintain some of their cultural practices and language, and marvel at how their children blend into the Canadian cultural mosaic. It is unlikely, however, that these refugees will even begin to comprehend Attawapiskat. Many Newfoundlanders left their fair province for the factories of Ontario and the Alberta oil sands when the fisheries collapsed. Sometimes—but not all of the time—it is necessary to move away from a barren location, and yes, it can be hard. For anyone to criticize Jean Chrétien for stating the obvious is illogical, moronic and politically correct at its worst.

The suicides by so many young folks on these isolated reserves are their desperate attempts to escape the hopelessness and the squalor that surrounds them. They want out: so why don’t we help them? Assigning blame isn’t benefiting anyone. Sadly I don’t notice more progressive reserves like Nipissing, Garden River, Golden Lake and Temagami offering to take them in. They need to explain why. Joseph Boyden says “relocating to the south” is considered a nightmare. But how could it be any worse?

Paul Wells’s “Europe under siege” (International, April 18) is a brilliant article. It does not spark hopelessness but hope. If one thing has been made clear, whether it is a reserve in Attawapiskat or a ghetto in Chicago or Brussels, isolating a community exponentially increases desperation. Young people pay the ultimate price. They end up killing themselves or others around them in their struggle to justify their lives. Jihadists, gangs, suicide pacts are not signs of a healthy society. Perhaps we should be trying harder to prevent or dissolve these enclaves of violence.

Red tape, refugees, and the rest

Sorry, sorry, sorry: we are all sorry for war in Syria, Syrian refugees and their plight. Now you want us to be sorry for the sponsors waiting for more Syrian refugees (“Waiting in vain,” National, April 18). Let me tell you who I’m really sorry for: people who want to become permanent residents of Canada, have skills and education and jobs waiting for them but are forced to submit and resubmit documentation as their applications sit unopened and unprocessed on some bureaucrat’s desk for months going on years. Promised decision dates pass without answer. Forget checking your status on the Immigration website: it is never accurate or updated. “Sorry” just isn’t cutting it for me anymore.

The coverage Maclean’s gave to Rob Ford (“The meaning of Rob Ford,” National, April 11) literally made me take two Gravols. Ford’s wife was photographed bruised. Ford was a drunk who drove drunk. Ford was a raging misogynist and racist homophobe who thought himself funny. Ford is today referred to as “profoundly human.” I’d say he was an embarrassment who personiﬁed the worst of humanity.

Down on the upskirt

The real bad news on your “Bad News” page of April 25 was your decision to publish three photos of the duchess of Cambridge dealing with her dress on a windy day. Your caption, “Get a grip, Marilyn,” equated this not-newsworthy event with a classic photo of titillation from an era of blatant sexism when reducing women to sexual objects was acceptable, i.e. the 1950s. Women who are married to political leaders or royals have a hard enough time being seen as intelligent human beings (not sexual accessories) without Maclean’s demeaning them in this way.

Hold up on that haircut myth

Anne Kingston refers to Bill Clinton getting a haircut on Air Force One in 1993 as bringing traffic at LAX “to a standstill” (“Hair raising,” International, April 18). The haircut did happen, but the air traffic delay did not. The issue was created by a reporter for a wire service, who claimed some ﬂights were delayed that day. Media and politicians ran with it in order to show that Clinton was out of touch with the average people. Later, when Clinton was asked about it by a reporter, he took other people’s word for it and apologized in public. Much later, Newsday filed a Freedom of Information request and found no evidence of any traffic delays or interruptions from any aviation log or source. Haircut: yes. Traffic delay: no. Political myth: yes.

Scott Feschuk jokes that Naomi Klein’s next book will retail for the price of “two chickens and a sheaf of hay” (“A wind farm in every kale patch!” Feschuk, April 25). Someone should take him on a drive through the countryside at harvest time to find an elusive “sheaf” of hay. We used the term to refer to the harvesting of grains. Hay is commonly baled: round or square, large or small.