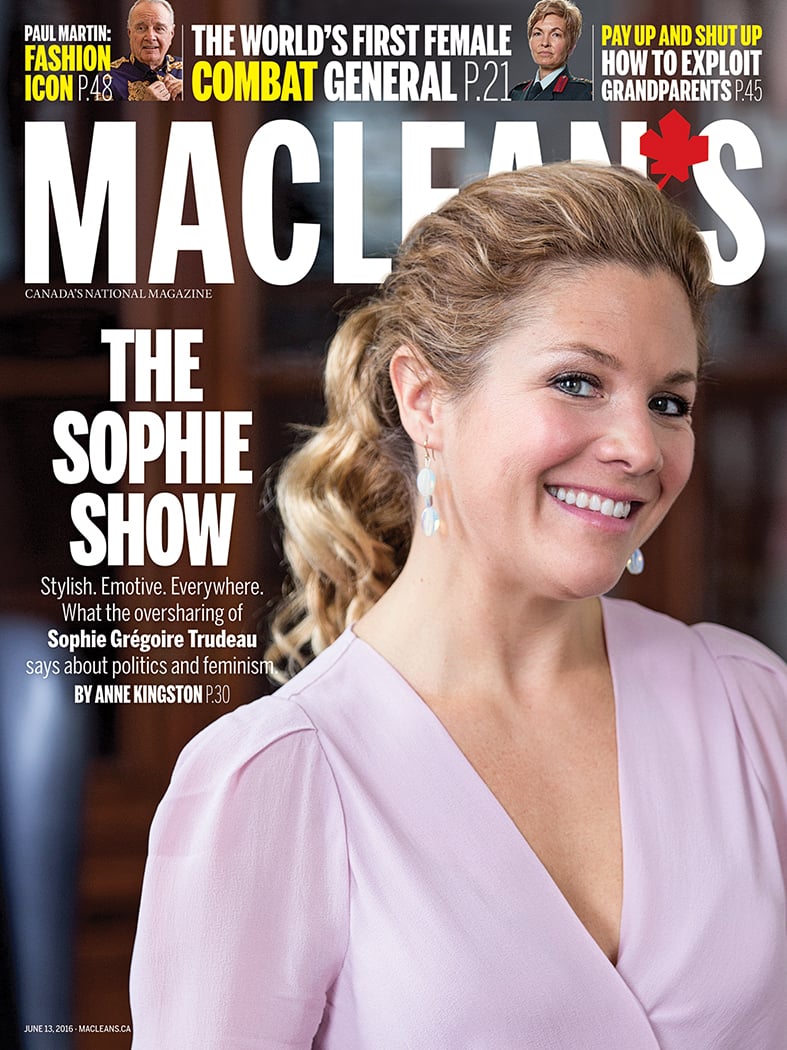 Okay, now you have given Sophie Grégoire Trudeau the attention she so desperately craves (“Just watch me,” National, June 13), let’s move on to more important subjects and stories. Unless of course it would be to let the Canadian public know that she is wanting more staff, more money and more security because she is struggling to keep on top of things. She obviously has no idea what the word “struggling” means.

Everyone rejoices at the happy marriage of Justin and Sophie. However, the overdose of your coverage is now boring. Sophie’s antics, her craving for attention, are an embarrassment, and irrelevant to the electorate. They divert attention from her husband’s performance as Prime Minister. At best, they are material for gossip magazines, not Maclean’s. Enough of this mania.

Pass the barf bag, three and a half more years of reading about and watching Lord and Lady Ego are more than enough to make all Canadians sick of them. Their elitism, sense of entitlement and narcissism are truly astonishing.

The loneliness of grandparenting

I have just finished reading your very good article about the shift in grandparenting (“Grandma’ll do it,” Society, June 13). It really hit home when one lady commented that once her son got married, it seems that she was not really part of the “family.” My son is very good about getting together with me and the grandsons, but any family or holiday occasions are all spent with my daughter-in-law’s family. They are a very tight-knit group that does not ever include me. They are such nice people, so I don’t understand. It hurts, but that’s the way it is. I guess it’s true: “A son is a son until he takes a wife.”

Wow! Now, after having raised seven children (22 years between the eldest and youngest), I have just learned from your article that my only value to my 13 grandchildren, and their parents, is financial and practical. Despite the fact that half of those 40 child-raising years was as a single mother managing monumental personal and financial challenges, despite the fact that my children have thrived, your experts on grandparenting recommend that I maintain an emotional and physical distance, keep my mouth shut and make sure that I provide a never-ending supply of money and resources for my grandchildren. Is no one in this society interested in the never-ending supply of love I have to offer? Is no one interested in how it was that I was able to empower my children to become award-winning scholars and humanitarians? The sooner I die the better, so that my grandchildren can benefit from the only asset I apparently have left: my real estate.

Setting and respecting boundaries is the crux of any healthy parenting dynamic. The truth is, if you didn’t get it right with your own kids, it’s unlikely that it will be any better on the do over.

We always hear about “quality of life,” but whenever do we hear about “quality of love”? Hardly ever, and this is the crux of the Maclean’s article. Most grandparents, be they wise, are in it because they know how important love is to the child’s developing psyche, and there can never be too much love—and we’re not talking about sneaking sweets, here! I have had many discussions with seniors and even with retailers who stock children’s items who all reveal the same thing: young parents are not interested in nurturing a meaningful grandparental relationship. They just want the money. To quote a 2015 Maclean’s cover story, “Hurry up and die, already, gramps!”

I question Dr. Ellen Wiebe’s comment “that each of us has the right to choose what we do with our own lives and our own bodies” (“The new pro-choice,” National, June 6). I would like to ask her how does this work for someone wanting to commit suicide. Typically friends, family, emergency workers, etc. run to the aid of someone attempting suicide in the hopes of preventing them from doing this. We do not stand back and allow this to happen because the person has the “right” to choose what they are doing with their life and/or their body. We do not have the right to choose when we are born or what family we are born into. Perhaps there are other things we should not have the right to choose either.

The tragic incident at the Cincinnati zoo where a gorilla was shot dead in an attempt to rescue a child is a clear demonstration of human recklessness at all levels (The Editorial, June 13). We imprison these creatures and keep them captive for human enjoyment. How low can we go to satisfy our sadistic pleasure? It is time to close down these concentration camps and let animals live freely in the wild and have these sadistic humans find other means of amusement.

In your June 13 editorial, you give the human species quite a bit of praise for our superior intelligence and our ability to “transcend base instincts to make complex ethical decisions.” Really? Our greed transcends this intelligence. How smart are we when we overfish the oceans, pollute the air and water and create a hugely negative change in our whole world with our carbon emissions? Not very. Animals aren’t the same as us, true, but they do deserve more care and sympathy than we afford them in the name of “progress.”

Your June 13 editorial about the fatal shooting of Harambe, the gorilla in a Cincinnati zoo, is seriously logically flawed, arguing that because it was appropriate to kill Harambe to save a child’s life, this therefore demonstrates that non-human animals cannot possibly have rights. Individuals can have differing rights (think of human adults versus children) without implying differences of value or undermining the ascription of rights to those who have “fewer” rights (think of human prisoners or those with advanced Alzheimer’s). Furthermore, it is significant that Harambe was in a zoo. There is a common tacit assumption that many captive animals do have rights—at least of a kind: to be adequately fed, cared for and even protected. To claim that Harambe didn’t have rights misses this more fluid space in which we have in fact accorded rights to many non-human animals (again, rights of a certain kind). The language of rights is designed to help us navigate a political context, specifying basic rules governing how we ought to treat particular others based on their interests and capacities. It does not imply that all creatures (human or otherwise) with interests have identical rights.

Thank you for accurately stating that a boy’s life is unquestionably more valuable than that of a gorilla. It’s about time people recognize that human life is valuable over and above that of animals. Period.

So Maclean’s thinks it’s “Good News” (“Science on the menu,” This Week, June 13) that the government is about to allow irradiated foods. Perhaps it should rethink that position. In 2010, 20 Canadians died because of tainted meat. Since then, the Harper government reduced the Canadian Food Inspection Agency to the role of rubber-stampers of in-house testing by meat producers. In the past few years, there have been huge recalls of tainted meat. Who found the problem? American food inspectors. Irradiated meat will simply be a licence for food producers to be even more lax with the processing of meats; unsanitary working conditions will become the norm because the “zapped” meat will be deemed safe even if unpalatable. When it comes to the dollar and profit, the bottom line will not be consumer health but the health of big business.

Religion and capitalism may indeed be cozy bedfellows in America, as Chris Lehmann’s book The Money Cult suggests (“Praise the Lord and pass the money,” Books, June 6), but unlike book reviewer Brian Bethune, I do not accept the idea that the economic pursuits of the religious must compromise their charitable pursuits. If I consider the Latter-day Saints (LDS), whom Bethune uses to illustrate Lehmann’s thesis, I know the opposite to be true. The wealth of the LDS Church and some of its members is balanced by enormous local and worldwide charity programs and a focus on using one’s time and energy to help others. Mormons believe that not only faith but also actions are necessary for salvation; thus, most LDS members spend many hours giving back to the community. I am married to a member of the LDS Church, and have attended church as a non-member for 10 years. The number of times I hear economic words such as prosperity, self-sufficiency and work ethic is minimal in comparison to the number of times I hear social words such as love, charity, service, help and support. When most Canadians are so faintly acquainted with the LDS faith as to believe Mormons still practise polygamy, Maclean’s could portray a more accurate picture.

For about two years, while I was a recovering book publisher, Maclean’s senior executive editor Peeter Kopvillem was trying to teach me how to write for a newsmagazine (“ ‘He made legions of us look good,’ ” Society, June 6). He was patient, tireless and infinitely polite. We talked a lot about Central and Eastern Europe, since it was a background we shared. When he told me he was waiting for a lung transplant, he was still optimistic that he would go back that way once more before he died. We were all lucky to have known him.