Levelling the post-secondary playing field for former youth in care 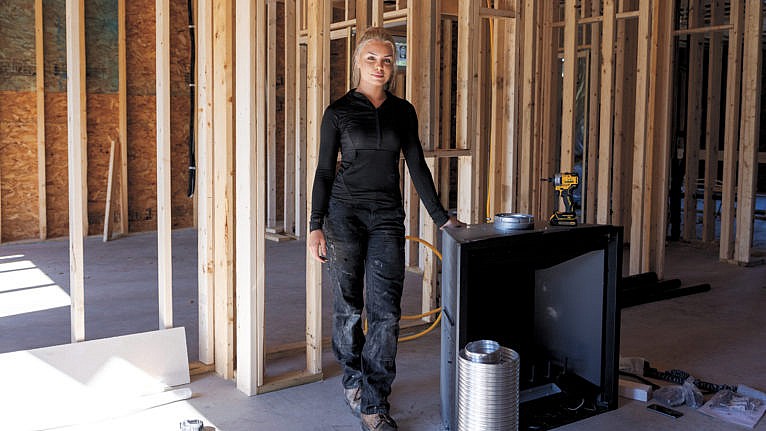 Bri Jardine on a job-site in Sackville for her Ultimate Home Comfort, her employer. (Photograph by Carolina Andrade)

Bri Jardine was adopted at age six and went into foster care at 14. Along the way, she never felt that anyone expected her to succeed—quite the opposite. “I didn’t even think I would graduate high school,” she says. “My grades were horrible because I had no motivation. I was just focused on distracting myself from my situation and being home as little as possible.” Post-secondary education, she says, was the furthest thing from her mind.

Given that the odds were stacked against her, Jardine, now 22, walked an unlikely path. She graduated from high school, moved to Halifax from Bridgewater, N.S., and completed an aesthetics program. She started a job doing nails, facials and other treatments at a spa in Mahone Bay. But before long, she began to feel unhappy with the work and started thinking about trying something different. The only problem was the financial burden.

“I was proud not to have any debt up until that point, and felt like I couldn’t justify going back to school,” she says. “I kept thinking, is it really worth taking out a $20,000 loan? But I decided to do it anyway.” She borrowed money and enrolled in a gas technician program at Nova Scotia Community College (NSCC).

And then, half a year into Jardine’s schooling, NSCC instituted a tuition bursary program for former youth in care—one of at least 20 schools in the country to do so. The application required her to outline her academic and career aspirations, and to prove she had spent time in foster care. Jardine got the second half of her tuition covered, which she says took an enormous weight off her shoulders. “I would have pursued the trades much sooner if tuition wasn’t such a barrier,” she says.

Post-secondary education is among the best predictors of better life outcomes for former youth in care, who are at significant risk of unemployment, homelessness, early parenthood, poor physical and mental health, and involvement with the criminal justice system.

It’s also a milestone they’re overwhelmingly less likely to attain, compared with people who’ve had no contact with the foster care system. Fifty-six per cent of Ontario wards drop out before finishing Grade 12, compared to 19 per cent in the general population. A British Columbia study showed that children in care are 20 times less likely to enrol in post-secondary schooling—a pattern that roughly holds true across a host of similar studies in Canada and the U.S. Former wards who do attend post-secondary school are less likely to complete their studies. And in Canada, Black, Indigenous and newcomer youth are overrepresented in the system. Across the country, 52.2 per cent of youth in care under the age of 14 are Indigenous, despite accounting for only 7.7 per cent of the population; in Toronto, 41 per cent of children and youth in care are Black, while comprising only 8.2 per cent of the general population.

But recently there has been a wave of tuition bursary programs for former youth in care, largely thanks to advocacy by the Child Welfare Political Action Committee (Child Welfare PAC). This not-for-profit is led by Jane Kovarikova, who has first-hand experience inside the system—she was bounced between six foster homes from the ages of six to 16. “I grew up believing I was stupid because I didn’t do well in high school,” she says. “At 14, I had foster parents who promised me I would fail. At 16, after successfully lobbying to leave the system, I was living like a full-grown adult.”

RELATED: How First Nations are fighting back against the foster care system

Unfortunately, says Kovarikova, “there is practically no tracking of youth outcomes after care in any meaningful way. Not knowing what happens with our youth in adult life means we can never be sure which ‘early years’ policies and programs have been successful. It also means it is difficult to know how many former youth in care have benefited from these tuition-free opportunities.”

Kovarikova also says tuition bursary programs are only part of the puzzle. “There are financial barriers for former youth in care, but there are psychological ones as well,” she says. Support services beyond finances—like coaching and peer mentorship—are on offer at many schools with tuition waivers.

“We know that the bursary is not the be-all and end-all. We also need to offer other types of support for students who receive [tuition waivers],” says Jill Provoe, NSCC’s executive director of human rights, equity and inclusion. This year, NSCC will adopt a coaching program from Ontario’s Georgian College—which introduced a tuition waiver for former youth in care in March—that pairs students with staff volunteers who offer academic and personal support with informal check-ins.

Kovarikova says Canada’s foster care system faces other fundamental problems. Through her role as board chair at Simcoe Muskoka Family Connexions, Kovarikova learned that her childhood file was never closed, which means it remains indefinitely accessible to thousands of child welfare workers. In 2019, Child Welfare PAC introduced landmark legislation that seeks to protect the privacy rights of former youth in care by prohibiting agencies from disclosing personal information after a person turns 21. The bill recently passed its second reading.

As for Jardine, she’s grateful to have landed a fulfilling career path, despite everything she’s faced. “I feel like I’m on the right track,” she says. “I love working with my hands and doing something new every day. And right now, I’m an apprentice at a small company with family ties. That feels good to me.”