Lies about Santa? They could be good for your child 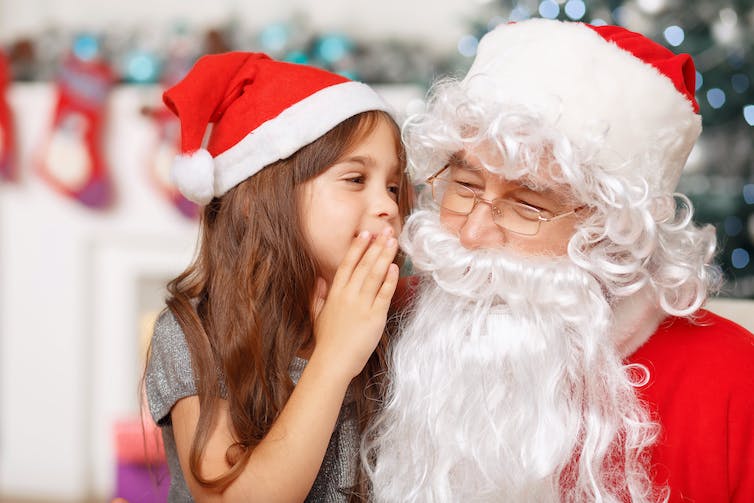 Developmental psychology suggests that fantastical beliefs in children are associated with positive developmental outcomes. And parents need not worry, children will bust the Santa myth themselves, when the time is right. (Shutterstock)

Kristen Dunfield is an assistant professor of psychology at Concordia University.

Christmas is a magical time of year, especially for children. Unfortunately, between elaborate Elf on the Shelf staging and fending off questions about Santa, parents are often left wondering how much of the magic depends on them.

Specifically, many parents worry about whether they should encourage their children’s belief in the physical reality of Santa, about the potential impact of lying to them and what to do when their children realize they’ve been duped.

Rest assured, parents, it’s not all up to you. In fact, the best approach involves supporting your kids while they figure it out on their own. They will, and it won’t be as bad as you expect.

As a developmental scientist, I spend most of my time researching children’s trust. I’m interested in how trust develops and what happens when it’s broken. During the holiday season, I spend a lot of time thinking about Santa.

As a proud auntie of three children under the age of four, my Santa musings have taken on a new significance. But, unlike many parents, I see the development of a belief in the physical reality of Santa, and the eventual myth-busting, as impressive achievements to be celebrated, not feared!

Research in the field of developmental psychology suggests that such fantastical beliefs are not actually harmful, but are associated with a number of positive developmental outcomes — from exercising the “counterfactual reasoning skills” needed for human innovation to boosting emotional development.

When kids question the magic

The vast majority of children will at some point believe in Santa. While many children learn these beliefs at home, the cultural support for Santa is so strong that children in households that don’t actively endorse the myth still sometimes believe.

Yet, despite Santa’s impressive marketing strategy, most children will abandon their belief by the age of eight. Though many parents fear this transition, it’s an inevitable part of growing up.

Santa is a mix of mundane and magical qualities. He is a jolly man dressed in red with a snowy beard. He also flies with the help of reindeer, visits all the world’s children in a single night and knows if you’ve been naughty or nice.

With age, a child’s thinking develops to the point where they start to notice Santa does magical things that physical objects can’t. This newfound knowledge is evident in the types of questions children are asking.

Younger children are often interested in general details about Santa, like: “Where does Santa live?” Older children are more likely to hone in on Santa’s extraordinary abilities: “How does Santa get around the whole world in a single night?”

Should you bust the myth?

Recognizing these challenging questions for what they are — cognitive development in action — may free some parents from the burden of belief.

If your goal is to extend your child’s belief in the physical reality of Santa, you can respond to the questions with plausible explanations or evidence. This is where NORAD, the online tracker that shows Santa’s progress around the globe on Christmas Eve, can come in handy.

If instead you want to let your child take the lead, you can simply direct the question back to them, allowing your child to come up with explanations for themselves: “I don’t know, how do you think the sleigh flies?”

Finally, if you think it’s time to usher your child into the common adult understanding of Santa as a beloved fantasy figure, you can provide different, disconfirming evidence and explanations.

My Santa myth was busted shortly after the discovery of Santa’s gift tags in my mother’s robe pocket. Regardless of which strategy you choose, it is inevitable that eventually the evidence against Santa will become overwhelming and the belief will become unsustainable.

If you choose to extend your child’s belief in Santa, and your child realizes you have deceived them, how will they respond?

As it turns out, probably pretty well. In a study examining children’s reaction to discovering the truth about Santa, parents generally took the transition much harder than their children, who actually felt quite positive about the discovery.

And why wouldn’t they? Santa is one of countless things children learn through the testimony of others. Because we rely on others for so much of what we know, humans are surprisingly well-equipped for the task. They evaluate both the source and content of the information they have received in light of their existing knowledge and their memory of past interactions with the source.

This means that, when compared to all of the reliable information that parents share with their children over their lives, it is highly unlikely a single lie will cause irreparable damage.

Children are also discovering the truth about Santa at around the same time they are starting to understand that some lies, like Santa lies, are told with good intentions.

Why Santa is for small gifts

Believing in impossible beings such as Santa is a special kind of magic available only to children.

Research suggests that fantastical beliefs are associated with a number of positive developmental outcomes. So, if your child is still a believer, feel free to protect that belief.

As your child ages, especially if there are younger siblings in the house, there are creative ways to keep the Santa experience positive, even after their belief in the physical reality of Santa has been abandoned.

Finally, always remember, as children are figuring out how the world really works, that they are going to look to the people and things around them for evidence.

It might be a good idea to give modest gifts from Santa and save the big ones for parents, because no matter what your family income, every child deserves to feel loved by Santa on Christmas morning.