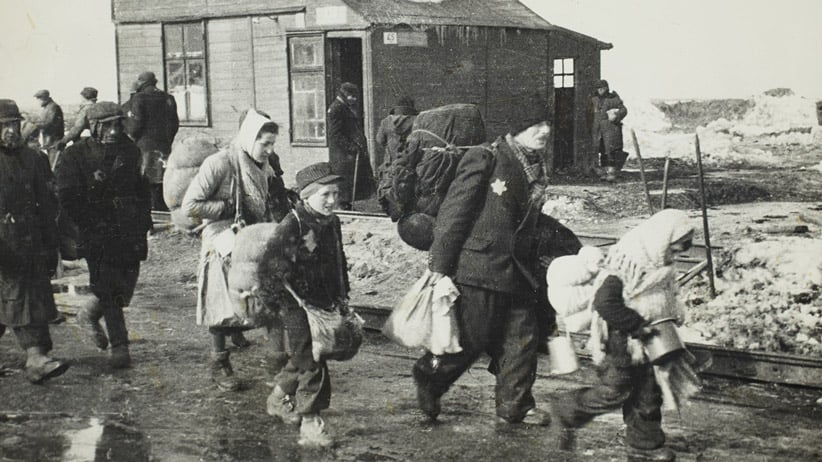 Henryk Ross was hired to take Nazi propaganda photos of the Jewish ghetto in Lodz, Poland. He frequently disobeyed orders in order to portray real life there, including pictures of families being deported to nearby gas chambers. (Art Gallery of Ontario)

In the summer of 1944, following Nazi orders to “liquidate” the Jewish ghetto in the Polish city of Lodz, Henryk Ross, a photographer and one of the enclosure’s inhabitants, quietly buried thousands of negatives he had made over the previous five years. Shovelling dirt onto the crate of images he’d often risked his life to create, and which would surely be destroyed in Nazi hands, he prayed that it would be found one day to serve as a “historical record of our martyrdom.”

Within months, Ross’s first wish came true: Shortly after the war’s end, he excavated his material. But, more than half a century would pass before his work became recognized as a significant visual record of the Holocaust. The 1990 Frankfurt show Our Way Is Work addressed the photographic history of the Lodz ghetto without including his pictures, and the multi-volume illustrated Encyclopedia of the Holocaust, published the same year, made no mention of him. Only when Memory Unearthed: The Lodz Ghetto Photographs of Henryk Ross, 1940–1944 opens at the Art Gallery of Ontario later this month will Ross’s poignant and provocative work be explored comprehensively for the first time. 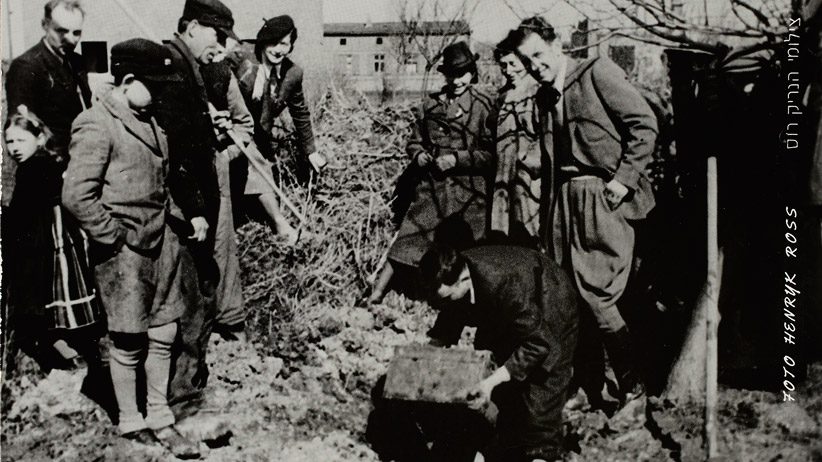 That’s in part because historians were uncertain how to interpret Ross’s unexpected, and often shocking, story of the ghetto—one he knew intimately. In the spring of 1940, after Lodz fell to the Wehrmacht, its Jewish population was confined behind barbed wire in a neglected 2.4-sq.-km patch of the city. The Nazis insidiously charged Jews with the orchestration of their own demise. Mordechai Chaim Rumkowski was appointed to lead the Judenrat, the confinement’s Jewish governing body. His decree, “Our way is work!” forced inhabitants to earn millions for the Third Reich, as the Lodz internment became Poland’s most proﬁtable ghetto. Rumkowski had a 10,000-strong administration that included Jewish police, postal workers—and documentary photographers. They were a comparatively privileged elite, offered such favours as slightly more food and room, as well as the hope of a longer life. Ross, a 39-year-old Warsaw-born veteran photojournalist and graphic artist, was chosen early on for his talent and became part of Rumkowski’s exclusive group.

Hired as an official in the department of statistics, he was assigned to produce passport-sized photographs of inmates for identity cards, to document meetings of well-dressed Jewish bureaucrats and to record teachers instructing schoolchildren, nurses tending the sick, and agricultural workers in the fields. The scenes are eerily regular. But, as the exhibition’s curator, Maia-Mari Sutnik, explains, Ross’s job was to create pictures that showed “the Nazis were looking after the Jews in a most normal way.”

Ross’s camera, however, was focused on much more than the creation of propaganda images. By 1942, he was explicitly forbidden from making any non-official photographs, including documentations of the hangings, shootings and executions that had become part of daily life. But, as his pictures in Memory Unearthed make clear, he did not follow orders. “He began putting his life at serious risk to make pictures,” says Sutnik, “using film he had stockpiled earlier.”

By the early 1940s, the Germans routinely exiled the Lodz Jews to the nearby village of Chełmno nad Nerem, where stationed vans converted to mobile gas-chambers were used for executions. The exhibition includes pictures made by Ross when he illicitly ventured outside ghetto boundaries to document the deportations. We also see the horror he shot inside its confines: Jews falling in the streets from hunger, the gallows in operation—pictures taken from cracks in closed doors, his camera hidden beneath an overcoat. 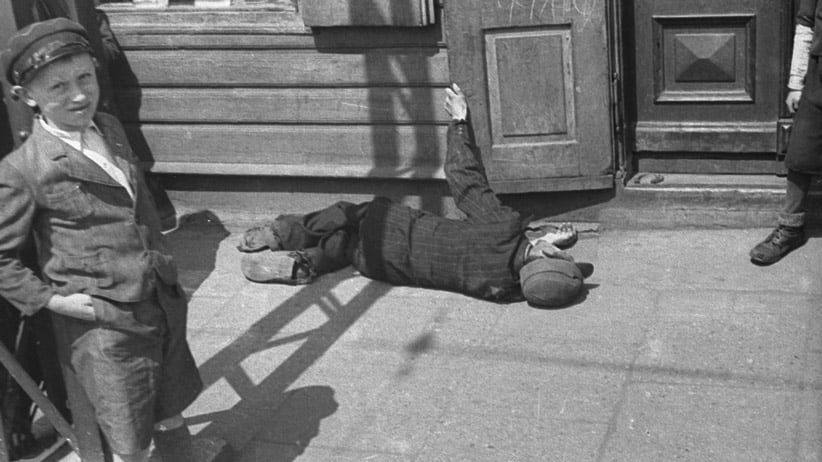 These images convey how Ross, in the tradition of painters Goya, Honoré Daumier and George Grosz, used his camera both as aesthetic instrument and means of protest. And, like all of art history’s masters of political imagery, Ross depicted terror and beauty in equal measure. In addition to tragic moments, his Leica captured the hopeful ones: scenes of Jewish daily life, moments caught with wit, style and grace.

We see his images of Jews at weddings and performing in plays, couples posing for portraits, children in fields, and his own wife and muse, Stefania Schoenberg (whom he married in 1941). These pictures reveal a photographer who worked closely with his subjects, using studio techniques and stylistic innovations to offer dignity and self-worth to a people living through terror each day. They are a testament to the spirit of survival, and to “creative moments that must be remembered,” says Sutnik. “We must keep in mind that, behind every picture, there was a photographer’s point of view.”

The diversity of Ross’s vision that Memory Unearthed reveals also accounts for why he remained unknown for so long. On Aug. 2, 1944, after the ghetto’s closing was announced, thousands of Jews, including its “elite,” were sent to their deaths at Auschwitz-Birkenau. Amid the turmoil, Ross sealed his negatives in iron jars, along with collected documents and printed photographs, then placed everything in a wooden box lined with tar. Certain his life was over, he made sure witnesses watched the crate’s burial at 2 Jagielonska St. 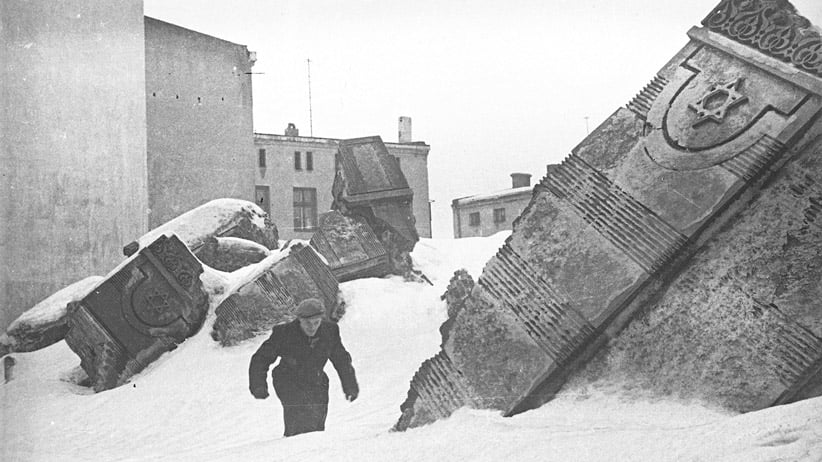 Ross survived extermination because he was chosen to be part of the ghetto’s “cleanup” squad, charged with retrieving valuables from emptied buildings and bringing them to the Nazis. When the Red Army liberated Lodz—and the 877 Jews who remained, out of 204,000—Ross excavated his material. More than half of the 6,000 negatives he’d buried were blackened by moisture and lost forever.

In 1956, Ross and Stefania immigrated to Israel, where, for five years, his film remained untouched. “After the war, the pictures that the public got to know were the atrocities,” explains Sutnik. “The piles of bodies at Auschwitz became the iconic images.” Although Ross had made such pictures, he’d also created a significant body of work that didn’t conform to what people expected to see. Only after he was asked to testify at the 1961 trial of Adolf Eichmann did Ross begin to gain confidence in presenting his photographs. After sitting face to face with the SS officer who played a key role in the Holocaust, Ross recalled, “everything came back to life.” 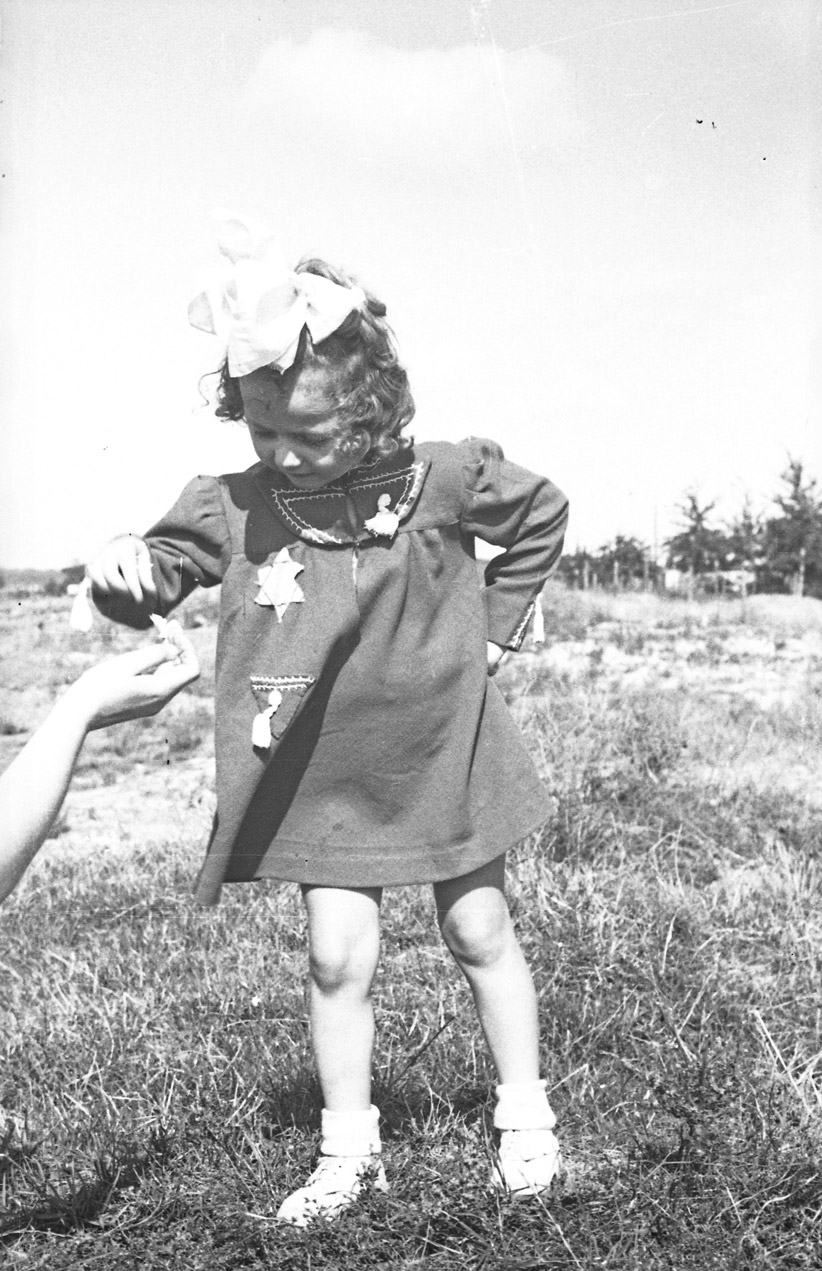 The following year, Ross printed up some of his negatives and published The Last Journey of the Jews of Lodz, a book that focused exclusively on his images of tragedy. Yet, because of his status as part of Lodz’s “elite” Jewish Council, some Holocaust survivors saw him as a Nazi collaborator. His critics felt his pictures were made with little risk.

For much of the remainder of his life, Ross continued to grapple with the challenge of how to craft an account of his experience at Lodz. Memory Unearthed places on view 17 pages of a notebook Ross created in the ’80s. It holds his edited negatives, made into contact prints—thumb-sized images on photographic paper—and cut up and pasted into sequential rows. He was likely trying to sort his material for another book.

Ross died in 1991 before he figured out how to tell his story. After his demise, others began to tell it for him. Ross’s son put his father’s negatives and prints on the market, and the collection was acquired by the U.K.-based Archive of Modern Conflict, funded by Canadian media magnate David Thomson. By 2005, Ross’s images had reached a wider circulation (a book of his work was compiled by the British photographer Martin Parr), but it was when Thomson donated the Ross collection to the Art Gallery of Ontario in 2006 that plans for the first major study of the photographer began. 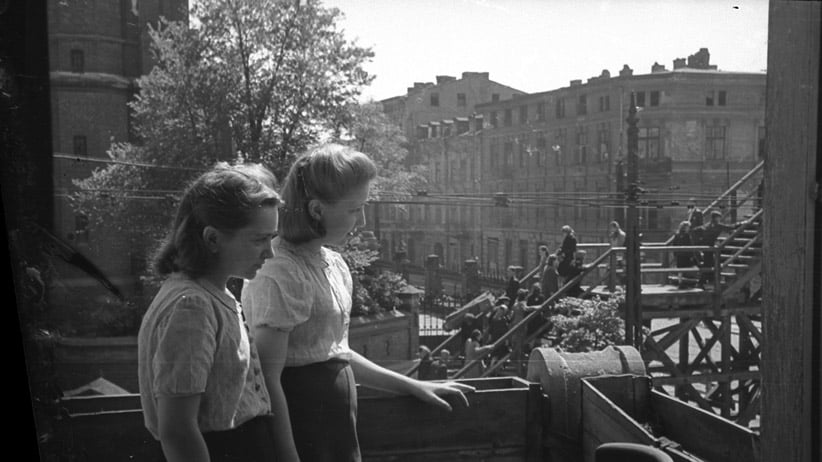 The exhibition has taken almost a decade to create because Ross’s work first had to be catalogued, a significant undertaking, since he did not date his negatives and only rarely provided descriptions of events or names of his subjects. (Tellingly, he chose not to caption any pictures of “elite” Jews, distancing himself from the protected class in Lodz’s hierarchy.)

Moreover, considerations had to be made how to present the work. Unlike others who’d exhibited Ross’s pictures, Sutnik made the decision to preserve the artist’s integrity and show only what Ross had printed himself—either in Lodz or Israel—while presenting his negatives as enlarged contact images (rather than creating new pictures from them). “The material is as true to the period as it can be,” she says. “We are not doing a reinterpretation of what he made.”