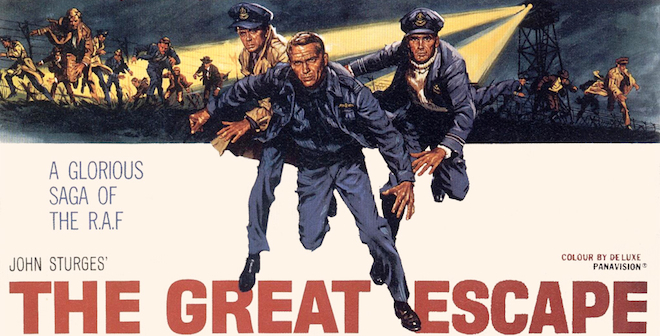 No list of Canadian escapes is complete without the only one that could be called great—and that’s the key role Canadians played in the 1944 tunnel escape of 76 prisoners of war from Stalag Luft III, an exploit glorified in the 1963 movie The Great Escape. Though Canadians were nearly invisible in the film, their contributions to the largest mass escape of the Second World War ranged from artist Robert Buckham’s forged travel permits to the daring of “tunnel king” Wally Floody, a pilot and former miner. Nine escaping officers were Canadian. Three were recaptured; six were among 50 escapees executed on orders of the German command.

The goals of those busting out of jail were far less noble, but here are six other escapes that also inspired movies:

1. German Luftwaffe pilot Franz von Werra: He twice attempted to escape after being forced down and captured during a raid on England. He was being transported to a Canadian prison camp when he leaped from a train near Prescott, Ont., in January 1941. He not only evaded capture; by mid-April, he was in Germany, having travelled through the U.S., Mexico, South America and Spain. He was back in the air, recording kills that summer, only to die in a training crash that fall. Movie: The One That Got Away, 1957

2. Toronto’s Boyd Gang: They escaped the Don Jail—twice. Serial bank robber Edwin Boyd and crew used a hacksaw hidden in the wooden foot of “Tough Lenny” Jackson to saw through the bars in 1951, then lowered themselves to the ground by using bedsheets. A robbery spree ensued. Jackson and Steve Suchan killed a police officer while attempting to avoid capture, and were later hanged. But not before Boyd, those two and a fourth gang member escaped from the Don again in 1952 with yet another hacksaw, launching a massive manhunt. Movie: Edwin Boyd: Citizen Gangster, 2012

3. Lucien Rivard: A flashy robber and drug-smuggler, he fled Montreal’s Bordeaux jail in March 1965 with another inmate. They’d offered to water the prison ice rink and used the hose to escape over the wall. While on the lam that month, Rivard mailed a letter to prime minister Lester Pearson, saying: “Life is short, you know. I don’t intend to be in jail for the rest of my life.” Rivard was captured four months later and extradited to the U.S., leaving behind a corruption scandal for Pearson’s Liberal government. Movie: Le piège américain (The American Trap), 2008

4. Canadians Lionel Wright, Stephen Reid and Paddy Mitchell: Between 1974 and 1980, they stole some $15 million from banks in the U.S. and Canada. The FBI dubbed them the Stopwatch Gang because each heist lasted less than two minutes. At various times, members of the gang escaped from Millhaven and Joyceville penitentiaries in Ontario. They fled to the U.S. in 1979 and were captured while living the good life in Sedona, Ariz. Mitchell escaped through an air conditioning vent at Arizona State Prison in 1986, and was recaptured in 1994. Most recent documentary: The Stopwatch Gang, 2013

5. Convicted murderer Allan Legere: He was being treated for an infection at a hospital in Moncton, N.B., in 1989, when he used a strip of metal to pick his handcuffs and leg shackles. He burst out of the hospital, kidnapped a woman and stole her car. He killed four people in the area of Miramichi, N.B., before he was captured seven months later. NFB documentary: Allan Legere: The Monster of Miramichi, 2004