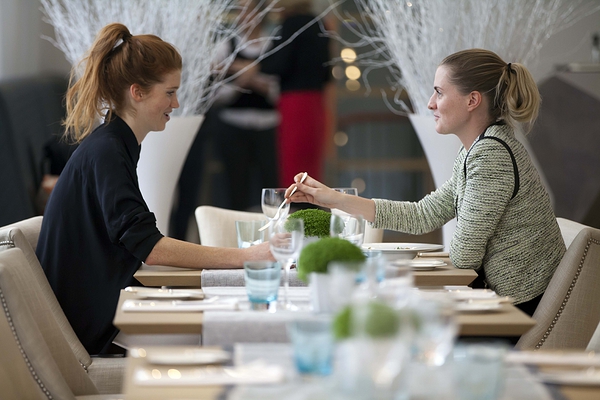 Grace Belgravia, London’s newest private members’ club, is exclusive on many different levels. There’s the posh Knightsbridge address, the $8,500 annual membership fee, the 11,000-sq.-foot building with its splendid atrium and vaulted ceilings, the spa, the hammam steam bath, the beauty salon, the private atelier and the on-staff acupuncturist, psychologist and gynecologist.

Gynecologist? Yes, that’s right. Grace Belgravia is a women-only social and health club, the first full-service one in Europe. And that’s saying something here in London, the world capital of institutionalized social exclusion.

There is, of course, a long history of single-sex members’ clubs in this town—places like Boodle’s, White’s or the Garrick, which crop up in novels by Evelyn Waugh or P.G. Wodehouse. The difference being, of course, that they are for men. Despite their status as historical relics, these gentlemen’s clubs are not cool places. In fact, they are the opposite of cool—the sort of places where old fogeys in ascots sit swilling sherry, playing backgammon and taking bets on which rain droplet will slide down the windowpane first. Snobbish, stifling places, really, despite their Old World charm, which is why most London women couldn’t care less about not being allowed into them.

London men, on the other hand, ought be very annoyed at being barred from Grace Belgravia. Not that they are barred, exactly. “We’re not anti-men, we’re just very pro-women,” says Kate Percival, a former marketing executive and the club’s CEO and co-founder, who explains that men are allowed in on certain nights—provided they accompany a member and behave themselves (and not stand around the bar getting sloshed and looking to pick up). “It’s about creating bonds between women in an inclusive, rather than exclusive, way,” she says.

Grace Belgravia is part of a growing trend toward female-only (and female-friendly) dining, drinking and socializing establishments in the British capital. There is Purple Dragon, a private members’ club in Chelsea for mothers and children as young as newborn (yes, really). And the Sorority, a networking club in Holborn, in central London, whose declared mission is to “shape a visionary future for professional women” by “celebrating style and feminity in business.” They do this, apparently, by hosting Harry Winston diamond events and speakers like fashion designer Donna Karan and “celebrity astrologer” Shelley von Strunckel.

On the more cheap and cheerful end, there is Sofakingcool, the cornily named Soho gay bar (try saying it out loud) that is, later this month, reopening as London’s first all-female restaurant. The proprietor, a Canadian former rugby player called KC Gates, recently told the London Evening Standard that, like the much tonier Grace Belgravia, her aim is not gender segregation, but a new kind of girl power. “We want it to be a place women can come to after work. It’s not about preventing men from coming in, but putting what women want first.”

And in some new coed establishments, there is a trend toward “female-friendly” atmosphere and service. STK, the U.S. steakhouse chain, is trying to lure groups of women and female business travellers (who are often loathe to eat alone) with smaller portions of meat, attentive service, and the tag line “not your Daddy’s steakhouse.”

Not all Londoners are thrilled at these new and improved dens of inequity. The Guardian columnist Zoe Williams called the whole women’s club trend “weird” and “dispiriting” and grumbled of Grace Belgravia’s focus on holistic medicine and health. “Years and years of fighting over equality, contraception, work, pay, smashing the patriarchy, and we are still eating raw food for pleasure and having spa treatments. It makes no sense, but it’s pointless to dwell.”

But Percival breezes over such criticisms by pointing out that most of her membership simply doesn’t want to sit around getting pie-eyed and gossiping, as has long been the tradition in gentlemen’s clubs. “We serve alcohol, of course, but the focus is on overall well-being. We take a holistic approach and focus on all of a woman’s needs—physical, mental, emotional, social and professional. It can all sound a bit austere and Calvinist, but it’s not at all. It’s just very diverse.”

With a growing membership (they have more than 100 members already and expect to have 350 by the end of this year) and a full calendar of events, Grace Belgravia looks poised to break the mould for single-sex socializing. But let’s be clear: this is not a club for all women, only the lucky few who can afford it. “Successful professional women don’t want to get hit on all the time, and they don’t always want to care about how they look while exercising,” says Percival. “They have their own money, and they have an elective choice on how to spend it.”