How Starbucks' Race Together campaign is playing out

Care for a discussion about race with your latte? In Starbucks around America, the reaction hasn't been quite as scornful 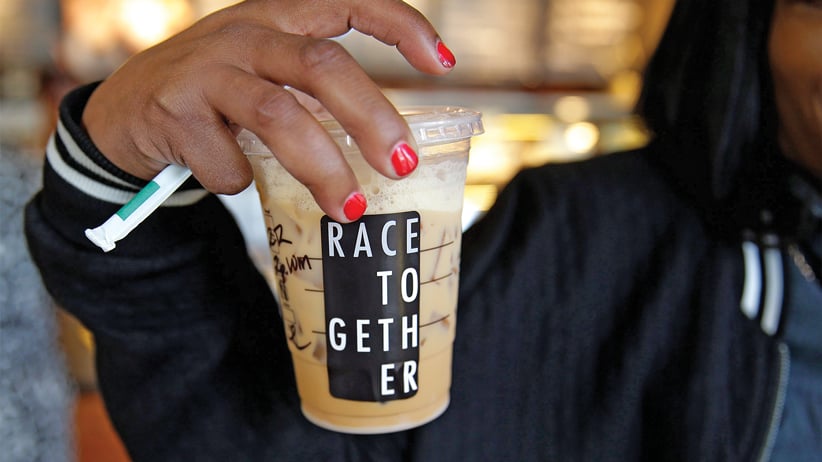 Last week, just after St. Patrick’s Day rollicked past midnight, outside an Irish-style pub across the street from the University of Virginia (UVA) campus, an African-American third-year student named Martese Johnson got into an imbroglio with constables of the state’s Alcoholic Beverage Control enforcement unit. Seconds later, witnesses saw Johnson being pinned by officers to the sidewalk with blood streaming down his immediately instagrammed face. He was charged with resisting arrest, obstructing justice without threats of force, and profane swearing or intoxication in public.

What happened—within hours—in bucolic Charlottesville, Va., was an outcry reprising the recent eruptions of anger, anguish and national introspection that followed the fatal police shooting of an unarmed African-American man in Ferguson, Mo., and the death of another black man while being restrained by police officers in Staten Island, N.Y.

On Wednesday evening, hundreds of students, UVA faculty members and townspeople of all races marched under the campus’s ancient magnolias to demand justice for the accused. Johnson—the only African-American on the university’s Honor Committee (and, ironically, its outgoing chair of community relations)—had recovered sufficiently to appeal to the crowd for calm. Then, on Friday afternoon, dozens of students walked out of a meeting with campus and civic authorities, chanting “black lives matter.”

Yet, at the same instant, just a few steps down University Avenue from the scene of Johnson’s arrest, the downtown Charlottesville branch of the Starbucks coffee imperium was rolling out the company’s year-long campaign to talk up and tone down the fractious state of racial relations in the United States. Here, and at all 12,000 of the caffeine giant’s other domestic locations, was corporate founder Howard Schultz’s latest foray into social activism: “Race Together.” His baristas had been encouraged to engage customers in conversation on such topics as, “How have your racial views evolved from those of your parents?” and “What is America’s greatest race challenge?”

“Coffee shops have always had a role to play as a venue for open conversation about issues that matter,” Schultz and USA Today publisher Larry Kramer wrote in a special eight-page supplement to Kramer’s newspaper that was being distributed at every Starbucks in the country. “We hope you’ll join us, at your community Starbucks, with your friends and neighbours.”

Across the country, critics accused Schultz of being a naive dreamer at best and a mercenary schemer at worst. “This time, he seems aggressively out of touch with his target audience,” the Washington Post said of Schultz. “The coffee company’s campaign has instead unleashed widespread vitriol and derision,” noted the New York Times. 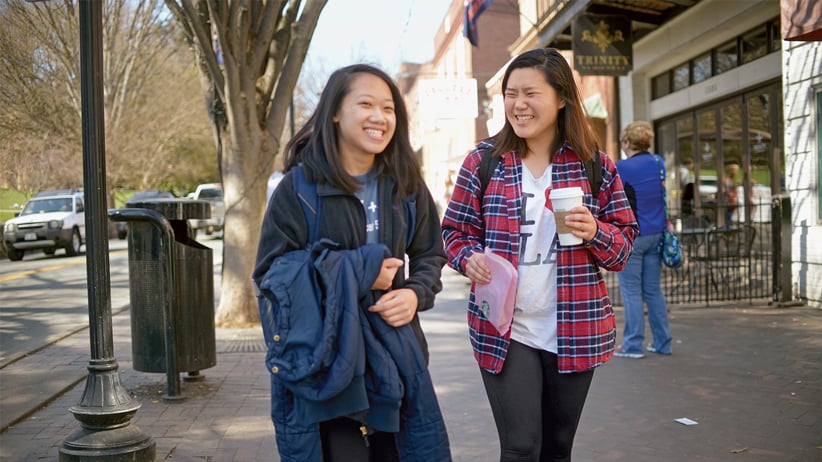 Jackie Liou (right), a foreign affairs student, is in favour of the initiative. (Pat Jarrett/Getty Images)

But at the Starbucks in now-bloody downtown Charlottesville, and in visits to numerous other locations in Virginia, Maryland and the District of Columbia, a Maclean’s reporter found much more hope than cynicism among the citizens of all colours whom the initiative was brewed to inspire. “My faith in humanity makes me believe that there was at least one person who worked on this who was sincere,” said Aryn Frazier, a member of the executive board of the Black Student Alliance and a leader of last week’s protests on a UVA campus where, she noted, fewer than six per cent of the university’s 16,000 undergraduates are African-American.

Frazier, a Maryland native, is a Jefferson Scholar, the winner of a highly competitive, merit-based grant named for the slaveholding president, Thomas Jefferson, who founded the University of Virginia two centuries ago, here in his hometown. It’s worth US$240,000 for four years of study at the institution. “I think we are just getting started in the changes that we are planning to make here, and in the greater Charlottesville community,” said Frazier. “It has to begin with us being honest about our lack of trust, and with [the school administration] being honest about where they are in the conversation, as individuals who have serious power in determining what happens next.”

Frazier slapped a copy of the USA Today insert and said, “Certainly, this is just marketing, but it has definitely started a conversation, even if you don’t take their quiz, even if that conversation doesn’t take place at Starbucks . . . I was already a part of that conversation. A lot of other people may join it now, not because Starbucks asked them to, but because they were already looking for a way in.”

At the University Avenue Starbucks, a first-year dual-major in economics and pre-medical student named Mary Sullivan was going over her notes from a psychology class. “I’ve never seen any racism on campus,” says Sullivan, who is white. “The fact that there is only one black man—Martese—on the Honor Committee is very disappointing. What happened to him is so unlike UVA.”

The first of a list of questions about race on the USA Today handout read: “My parents had (blank) friends of a different race.” “Zero, as far as I can remember,” Sullivan said, “though I don’t know about when they were younger.” The second question said, “I have (blank) friends of a different race.” “Oh, goodness! At least five!” she enthused. She moved on to another printed question: “How have your racial views evolved from those of your parents?” “Yeah,” said Sullivan. “As in, everyone’s equal.”

“I think it’s a good idea,” said a first-year student named Jackie Liou, who is majoring in foreign affairs, about the Starbucks initiative. “A lot of people associate the race issue with the 1960s and the civil-rights movement. When we call someone a racist, they say, ‘There is no racism anymore—it’s the 21st century.’ ” Liou, whose parents came to the U.S. from Taiwan, said she “can see how it could be used for marketing. But I always try to be an optimist and hope that it is sincere.” She was asked to answer the second question. “Well over a hundred,” she answered. “I don’t want my friends to be just of one race.”

“Do you think you understand black anger?” a reporter inquired. “I don’t think it’s just black anger,” said Liou. “It should be minority anger, too.”
In a video distributed to his employees last week, Schultz—the man who convinced millions of gullible addicts that a small coffee actually is “tall”—encouraged them to write “Race Together” or slap a sticker with those words onto customers’ cups. By Sunday, baristas had been relieved of this duty. The corporate climb-down may have been moot anyway; at none of the locations this reporter visited did he see a single latte-foamer write a slogan, affix a decal or even mention the campaign to a customer. There were ample stacks of the USA Today handout at every restaurant visited, but no patron anywhere was seen to be reading one. “Let me assure you that we didn’t expect universal praise,” Howard Schultz sighed in a message to his staff.

“The disparity in this country is socio-economic, not ethnic,” noted a white customer named Nicole Zilliox in a Starbucks in Rockville, Md., where she works for the World Health Organization in an ethnically diverse office setting. “It is a marketing ploy; truly, that’s what it is,” Zilliox said. “I might tell my friends about this initiative, but I won’t say, ‘Oh, look how committed Starbucks is to this issue.’ One can hope it is 95 per cent business and five per cent altruism. That’s always about the best you can hope for.”

It has been half a century since one prominent black American preached the opposite of “Race Together”: race apart. “The only permanent solution is complete separation or some land of our own in a country of our own,” said Malcolm X in 1963, two years before he was assassinated. “All other courses will lead to violence and bloodshed.”

Fifty years later, in many American cities, Malcolm’s wish has been fulfilled. At Malcolm X Elementary School in Washington, for example, every pupil save one Hispanic boy is African-American. Anacostia High School in the capital’s southeast quadrant also is 100 per cent black, as are countless other schools, church congregations, workplaces and social clubs across the country.

What effect Howard Schultz’s appeal to “stimulate conversation, compassion and action around race in America” will have in the country’s predominately black neighbourhoods is difficult to predict. There is no Starbucks on Malcolm X Avenue in Washington, nor on Dr. Martin Luther King Avenue, a main commercial street of the African-American district. And there is none in Ferguson.

“What is America’s greatest race challenge?” asked the back page of the USA Today on the counter at Starbucks. “I think America’s greatest race challenge is recognizing that racial issues won’t be solved by focusing on any one issue,” Frazier responded in Charlottesville. “The justice system, the education system, the economic system—it’s the collision of all these things that creates the state we’re in. If we fix any single one of these issues, but not the others, we’ll still have very major problems.”

“Do you think things will change in this country in your lifetime?” the Jefferson Scholar was asked. This was not one of the questions on the Starbucks syllabus. Frazier answered, “I’m certainly going to try.”