A literary salon with David Chilton for twentysomethings

Literary salons are not relics of 17th century France. They are alive and well, thanks in part to the Writers’ Trust of Canada, a charitable organization that provides this country’s authors with nine literary awards, a writer’s retreat and roughly $400,000 annually in financial support. For the last 20 years, they’ve also run a program that sees book-loving volunteers host guests and their favourite Canadian writers in their homes. Past authors include Joseph Boyden, Camilla Gibb, Conrad Black and Farley Mowat.

On a recent Wednesday night, Matt and Nancy Holland opened their doors on a tree-lined residential street in Toronto’s affluent Rosedale neighbourhood to David Chilton, the best-selling author whose 1987 The Wealthy Barber sold over two million copies in Canada. But the couple wasn’t expecting the usual Writers’ Trust crowd of the literary elite.

For this salon, they let their daughter Maddy and her friend David Clark–the son of Catherine Clark, a philanthropist on the organization’s Board of Directors, organize the event. Both recent university graduates extended invitations via Facebook to their twentysomething friends, most of whom have invested little thought to RSPs and TFSAs, to hear Chilton speak about personal finance.

Nancy Holland admitted that she was nervous about handing over the guest list to the two, and about using the social media website to organize it—a first for the Writers’ Trust. “We were worried that not enough people would come and they kept saying, ‘Don’t worry mom!'”

Before Chilton, dressed sharply in black from head to toe, took the stage (the Hollands’ gazebo-vaulted kitchen breakfast nook, a few steps above the recessed living room) the evening’s young guests, outfitted in everything from fuschia-coloured skinny jeans and white summer dresses to khaki pants and blue button-ups, congregated in the dining room.

The table was covered in food. Save for the sushi and the brownies, which Cathy Clark baked, the hors d’oeuvres—little ciabatta buns stuffed with pulled pork and coleslaw, skewers of tiny bocconcini and cherry tomatoes standing in basil pesto and roasted shrimp with homemade cocktail sauce and a jalapeño and cilantro dip—were prepared by Emma Beqaj.

The 24-year-old caterer graduated in April from the Culinary Management program at George Brown and just finished a nine month stint working at Toronto’s Buca restaurant.  “I had my first dinner party when I was 12 years old,” said Beqaj, wearing a black apron with “Emma’s Eatery” stitched in white across the chest. “It was for 10 of my girlfriends. I’ve always loved entertaining and hosting.” Before two years of college, Beqaj did a four year undergraduate degree at Acadia in Nova Scotia majoring in French and minoring in History. She doesn’t regret going to university. “I don’t think at 18 or 19 I would have been ready for college. I think I realized what my passion was during those four years—when I also wrote a food blog—and I was more prepared for George Brown.”

Jack Eidinger, only 20 years old, making him a little younger than the rest, just finished his second year at King’s College in Halifax. The tall, lanky history major confessed that he didn’t know too many of the other twentysomethings in the room. “My parents were here but they vanished. They didn’t want to stay because they were fearful to hear about all the mistakes that they’ve made.”

Like most young people, the notion of money management is not high on his radar. “Not at all, actually, because I have no money to manage.” His game plan after he graduates? “Hopefully employment,” he deadpanned. “I know a lot of people who want to go straight on to do a Masters degree but I feel like I want to do stuff first. Besides, I don’t even know what you can get with a B.A.” Leaning up against a couch, Edineger asked, “Have you seen Avenue Q?” (I had not heard of the American musical stage comedy.) “There’s a song in it called, What Can You Get With a B.A. in English.” Standing up a little, he continued, “I guess you just have to do what you can to experience things while you’re in school. I find a lot of learning happens outside the classroom.”

Like tonight, for example. And like Chilton, Eidenger is dressed all in black, albeit more casually. When the comparison is noted and the young man is pressed to comment on its significance, he guessed, “It’s laundry day for both of us?”

Brennan Moore, a 23-year-old University of Western Ontario graduate who is now a broker, always knew he wanted to work in finance, which is why he studied Political Science and Economics. After working for three summers at BMO Nesbitt Burns, he was taken on full time for the investment house after he graduated. Moore, dressed sharply in a dark suit with a pastel pink dress shirt peeking out beneath, hasn’t read The Wealthy Barber. “I should have read the Coles Notes before I came.”

“My son woke me up this morning and asked me to come tonight,” says Sandy Phillips. “I was thinking it was the Russian book [The Winter Palace, by Eva Stachniak] from last week’s salon.” After getting her daughter out the door for school, the mother of four soon checked back in with her son and realized tonight’s event featured Chilton. “I keep this on my bedside table,” she said, clutching her well-worn paperback copy of The Wealthy Barber. “Can you believe it?” Phillips called over her son, Adam, to confirm the coincidence. The 21-year-old, fourth year Bishops undergraduate, nodded and went on to say that his parents are extremely supportive of his decision to study Fine Arts. He’s also taking a minor in entrepeneurship, after enjoying an introductory class. “I’d love to do marketing media” he says. Adam is primarily a sculptor, but “in my painting class I fell in love with Jackson Pollock.”

With Chilton ready to take the stage, guests sat down in the 25 chairs set up in the Holland’s living room, which had been cleared of furniture. People found seats on a couch just above the two steps that lead to the dining room, and even sat on the steps themselves. It was a full house. French doors were swung wide open, letting in both the perfume from a lilac tree bursting with blooms, and mosquitoes. After warm introductions by Cathy and Nancy, Chilton, sitting on a bar stool, charmed the audience with laugh-out-loud anecdotes, like the time he was in a Kitchener Chapters and overhead a husband advising his wife not to buy the Wealthy Barber. After Chilton corrected the man on a detail in the book that he kept misquoting, and revealed that he was in fact the author, they bought the book.

Then came advice.  On personal finance, Chilton charismatically laid it out straight: people spend too much. “It’s not that we’re bad savers, but we are phenomenal spenders.” And it doesn’t help that everyone–from the government to kids, spouses and friends–want you to spend your hard-earned dollars. Although unquestionably successful, Chilton doesn’t believe that heaps of material goods correlates to being happier. “I don’t have stuff,” he confessed, throwing up his arms. “No garage, no cottage.” He also confessed to being bewildered by those students who complain about student debt but have taken sojourns in Europe and spent weeks lounging on beaches during Spring breaks. And when it comes to success in life, luck counts for a lot. That Chilton has good parents, is remarkably healthy, and has high energy–all lucky coincidences—has helped him achieve success, not to mention that he achieved it early on—Chilton was just 27 when The Wealthy Barber first hit the top-sellers list in 1989—giving him more time for his investments to grow.

The author told the audience not to “underestimate the importance of being nice.” He went on at length to talk about sisters Janet and Greta Podleski, the best-selling authors of the Looneyspoons cookbook, which Chilton helped publish. “Janet and Greta return every call and email they get personally,” a rule Chilton also adheres to every evening between 9:00 pm and 1:00 am. “After 15 or 16 years of knowing them, I think I respect them more than ever.”

Their story is a stunning one. They quit their jobs and went into $60,000 worth of debt while trying to get their cookbook off the ground. They used to hound Chilton with emails, faxes and phone calls, asking for publishing help. Everytime he spoke in Ottawa, they’d be sitting in the front row. After one such encounter Janet and Greta slipped him their finished, but unpublished, book. Afterwards Chilton happened to stop in at his parents’ place in Kitchener on the way to the airport and brought the book along. His mother thought it was funny and his dad, whom Chilton admires greatly, was surprised at how strong the language and editing was. He asked his mom to cook five recipes and report back. When she called 10 days later and said, “That’s the best food I’ve ever eaten,” he responded, “Best food period, or best low-fat food?” “It’s the best ever, and you should publish that book.”

“You can do all the formal research and focus groups you want,” he told the audience, “but when your mom tells you to publish the book, you publish the book.” Looneyspoons went on to spend 85 weeks on the national bestseller list and sold 850,000 copies in Canada in its first 18 months–a feat not matched in the country until Harry Potter came along, said Chilton.

Next came questions. When a mother in the crowd asked Chilton if young people should consider collapsing their RSPs to buy a condo, he confessed that “the pure supply side of the condo market [in Toronto] really does scare me.” And that renting in many cities is a often a better value. And no, renting is not like throwing your money away and having nothing to show for it: “You’re paying for a service, lodging. It’s like food, and you need to eat.”  One of the best things you can do is live in a home that costs less than you can afford. Chilton’s own house is only 1,300 sq. feet.

And what kind of stocks should people be stuffing their portfolios with? Besides agriculture-related ones, gold and juniors, “you can do pretty well by buying everything people tell you not to buy.” And don’t waste your time reading economic forecasts: nobody knows.

After several rounds of applause and presentations of gifts by the two young hosts to Chilton and by the Writers’ Trust members to the two young hosts, people returned to refresh their drinks and finish up the food. Jake Eidenger agreed that Chilton was a great story teller. “It was interesting,” he said, reflecting on the talk, “and also a little depressing. Like the cookbook authors, there are just people who know exactly what they want to do. I wish I had that sort of vision, he said.” “I guess that’s what makes those people special.” 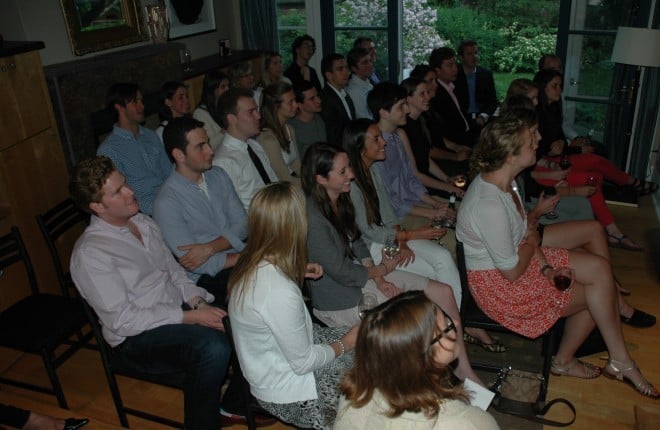