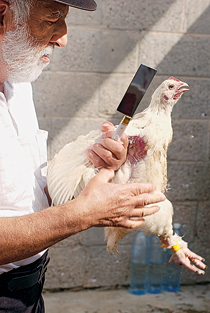 In November, the country’s Constitutional Court outlawed the style of ritual slaughter used by Jewish and Islamic communities for the production of kosher and halal meats. The move brought Poland in line with several other European nations, including Sweden, Norway and Latvia, and upheld the views of animal rights activists, who argue that ritual butchery causes undue suffering and is thus prohibited by Poland’s 1997 Law on the Protection of Animals. (Kosher and halal slaughter involves cutting the throats of conscious animals; modern abattoirs stun livestock before slaughter.)

In July, Poland’s Parliament was expected to pass a legal exception for ritual slaughter, but the vote failed. Last week, leaders of Krakow’s Jewish and Islamic community centres came together to deny their butchery styles cause needless harm. “While we do not feel this ruling was meant to curtail our freedom and turn us into second-class citizens,” they added, “we are afraid that this is the result.”

In a nation where the past—and especially the role of Polish nationals vis-à-vis German occupiers—is notoriously sensitive, the habit of some activists to draw parallels between the Third Reich and today’s Polish Parliament is especially forceful. Fighting words have come from all corners. In July, Israel called the parliamentary vote “totally unacceptable,” and warned it “seriously harms the process of restoring Jewish life in Poland.” The American Jewish Committee dubbed the move “beyond shocking.” References to the status of Jews in Nazi-occupied Poland have present-day politicians reeling. During a recent trip to Spain, Polish Prime Minister Donald Tusk called “the historical context . . . to put it mildly, off target.” In fact, Poland’s president supports ritual slaughter, and has vowed to engage with Parliament on the issue.

Konstanty Gebert, a Warsaw-based writer and Jewish activist, told Maclean’s that Polish MPs were not propelled by anti-Semitism or anti-Islamism—though public debate was infected with both poisons. Rather, he says, they were “blissfully ignorant.” Gebert is buoyed by the recent collaboration between Poland’s Jewish and Muslim communities, which he calls “unprecedented.” The groups plan to submit a motion to the Constitutional Court, urging a review of the case.

Meanwhile, Poland’s livestock industry is less than pleased: the country is a leading exporter of halal and kosher meat to countries like Iran, Israel and Egypt. For the moment, production has ceased. Polish stores and restaurants are selling off their dwindling stocks—and are beginning to import more expensive kosher and halal products from abroad.

Debates about ritual slaughter are going on elsewhere in Europe, but in Poland, any move that even hints at a targeting of the Jewish minority is particularly fraught. Fewer than 25,000 Jews (and around 30,000 Muslims) are estimated to remain in the country of 38.5 million, a sharp contrast to 1939, when roughly 10 per cent of the population were Jewish.

A similarly historically charged debate took place last year in Germany, when the Bundestag voted on a proposed ban of male circumcision. The measure was defeated.