A trip to the country, with Terroir

The annual hospitality industry symposium Terroir has been bringing together chefs, restaurateurs, food and wine writers–and eaters–for the last six years in order to encourage community and share ideas. This year’s theme? The New Radicals. The day-long event, which took place on April 23 at The Arcadian Court in Toronto, featured a choice roster of speakers–from former music executive turned restaurateur Ken Friedman who spoke on taking chances to Tama Matsuoka Wong, official forager for Daniel Boulud’s three Michelin Starred flagship restaurant in New York, who discussed how chefs can integrate wild plants into their dishes. Word on the street is that Barton Seaver, a Washington D.C. based chef, author of For Cod & Country–and a bonafide National Geographic Fellow–roused the crowds with his poetic oration on harvesting fish responsibly–and making them taste good.

The following day many of the speakers and chefs, plus a handful of media, were invited on a culinary tour of Grey Bruce Simcoe County to see how radical, gastronomically speaking, this sprawling pocket of Ontario that stretches west of the 400 and south of Georgian Bay has become. The tour, which had the whimsy of a school bus trip–complete with rain boots and knapsacks–didn’t disappoint.

First stop was a visit with Thomas Wilson and Nicole Judge. This husband-and-wife team opened up Spirit Tree Estate Cidery near the end of 2009 on property in Caledon, just north of Brampton, that they purchased in 2005. 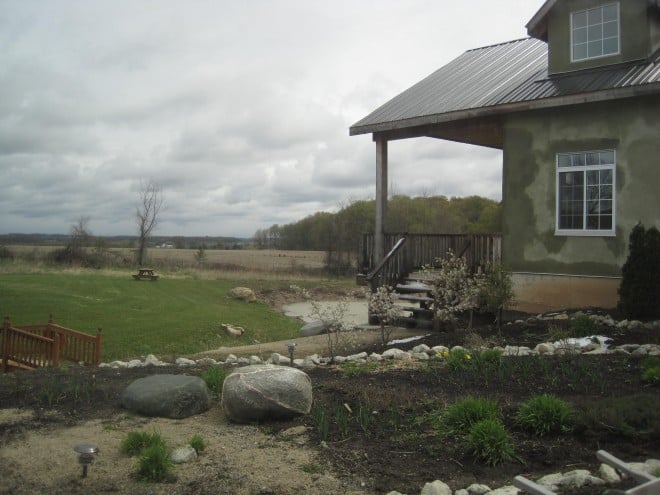 About 5,000 trees—and 20 varieties of apples, including French and English heirlooms specific for making cider—supply enough fruit to make both their alcoholic and non-alcoholic elixirs. They also built and installed their own Allan Scott-designed brick oven—and at 40 square feet its possibly the largest commercial version of it’s kind–where their artisanal breads and treats, like Irish soda scones and cinnamon buns. 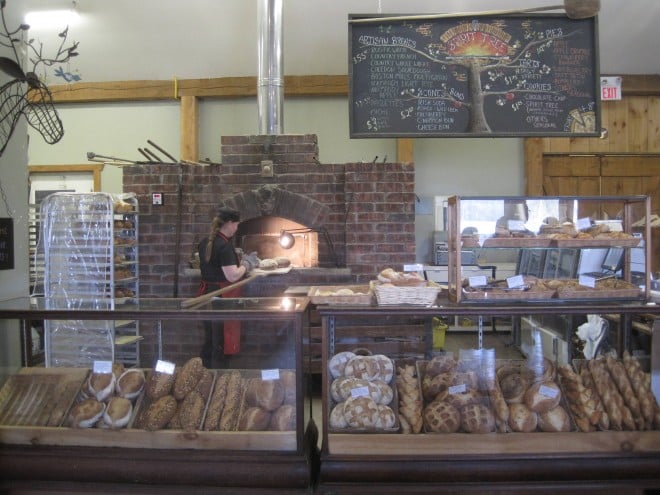 Once the oven, which Thomas compares to a thermal batter that takes a good week to cool down, gets to its desired temperature of about 600 degrees, it’s capable of baking bread all day long, on only about $8 worth of fire wood.

And Spirit Tree doesn’t stop there, sustainability-speaking. The building, a straw bail structure, uses a geo-thermal forced air system, which means that all of their heat and water is exracted from the ground. The same system provides cool air in the summer. And their apple press room, which seconds as a bottling station, uses good old-fashioned gravity to send the extracted fruit juice down to the cellar. Plus, ulta-violet technology, rather than heat pasteurization, is used to purify their beverages. Not only does this save on energy–Thomas figures it’s a 78 per cent reduction since boiling vast amounts of liquids is energy-zapping–but filtering light through liquid doesn’t kill off the good and healthy enzymes.

Of course, samples of Spirit Tree’s baked goods were made available. It was important to try them. 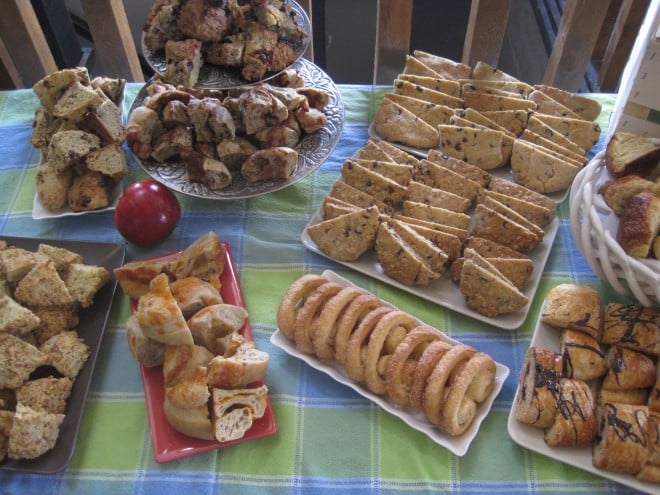 They were delicious. It was also essential to taste their ciders. Besides the basic pub-style cider (good), their estate reserve cider (very good) and their ice cider, which Thomas says, “makes ice wine look bad”, they make a French nouveau-style cider called Wassail, which was a creamy, Bing cherry-laced dream. And at only 2 per cent alcohol, what a perfect summer afternoon sipper it’ll make.

Next stop was a light lunch at  Hasai Bakeryin Singhampton, just south of Collingwood, run by Michael Stadtländer. 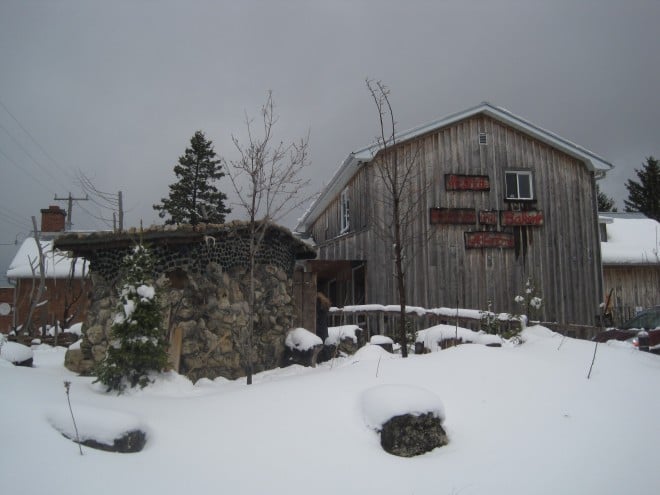 “It’s like being in a tree house,” said Ivy Knight, editor-in-chief and co-founder of Swallow Food, “or like a demented wizard’s palace.” 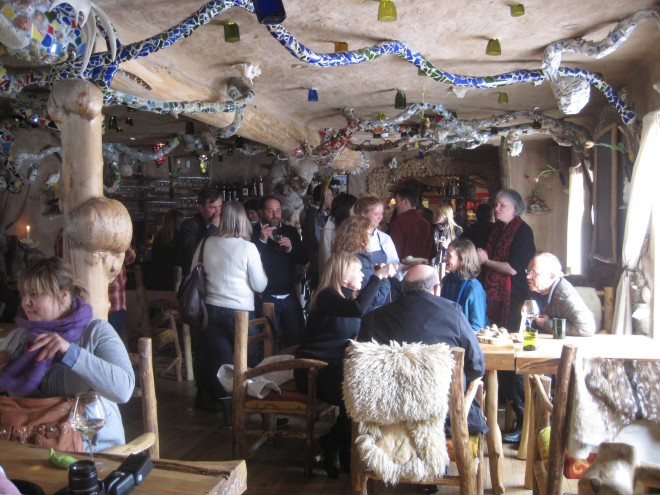 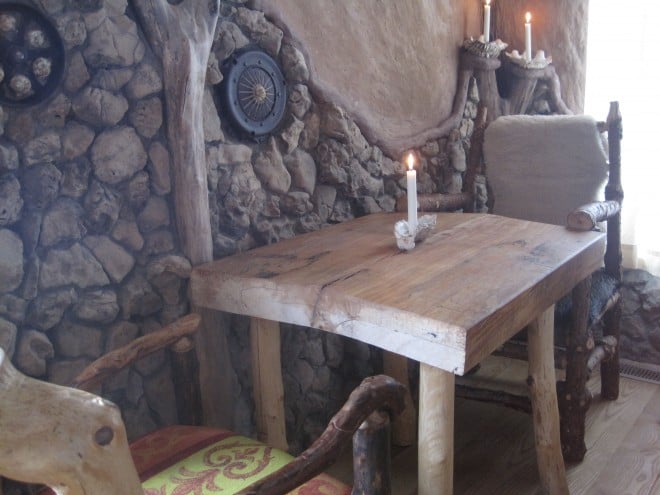 It’s not just the Antoni Gaudi-meets-Dungeons and Dragons-decor that makes this place feel like it’s from another time: when a media personality asked Stadtländer and his wife, Nobuyo, who was impressively dressed in sparkling pink pants and a wool vest, what their Twitter handle was, they responded, “Candles? Sure, we have candles.”

They may not be on top of social media, but man oh man can Stadtländer make a mean mousse of garlic scapes and cream cheese. 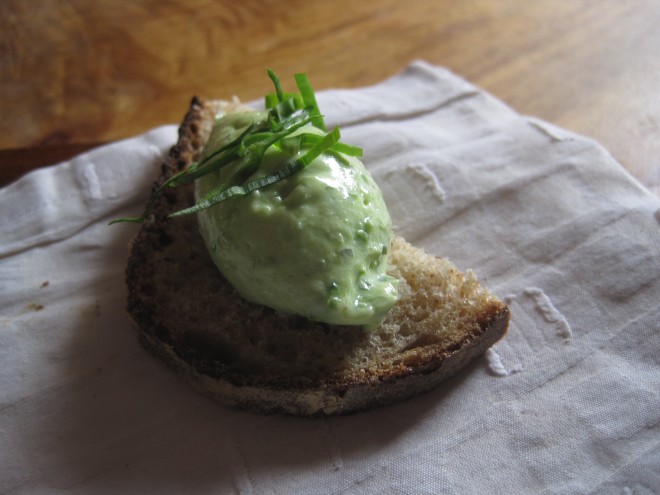 It stayed with me, literally, all day. But I didn’t mind. I washed it down, on numerous occasions, with pizza being pulled from the oven, manned by a brigade of young Stadtländer-ites just outside the entrance to the bakery. 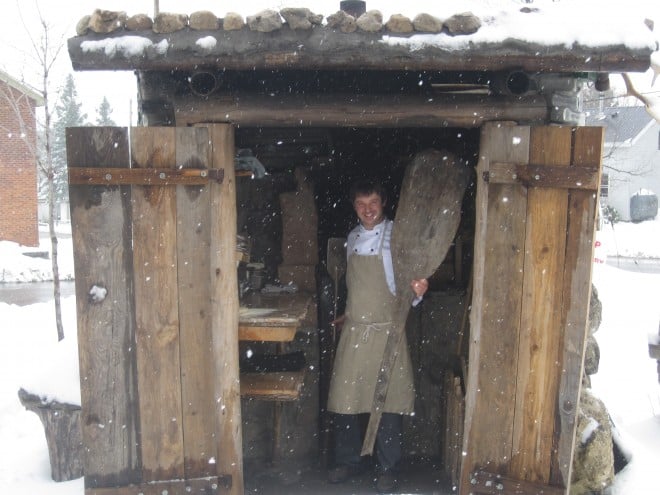 The wood-fired bake house out from the bakery, made of stone and wine bottles 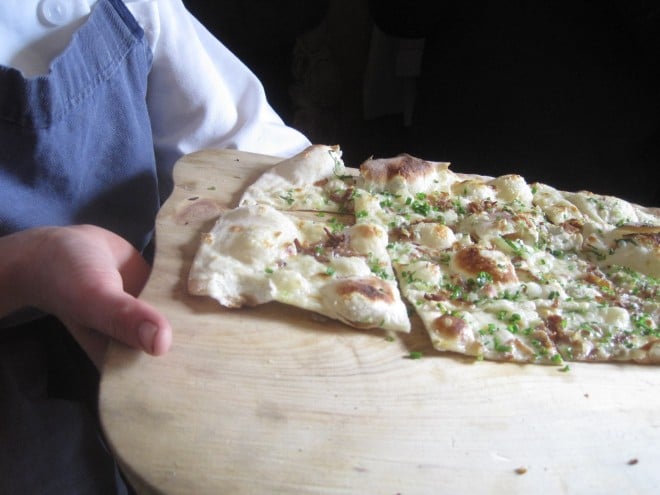 Pizza fresh from the oven

As the six-foot-plus Stadtländer came inside after scooping up a ball of snow from the porch into his baseball mit-size hand (in order to keep the milk on the bar cold for people’s coffee and tea) I mentioned the irony of this year’s Terroir theme being “the new radicals” and how he’s arguably the original Toronto food radical. He responded, “Yes! I’m not a new radical, I’m an old radical.” But how does he stay radical? “In every profession, you’re only as good as your last job so you keep doing projects.” Which isn’t so hard for the chef, who admits it’s in his nature to get bored pretty quickly. “I always need a challenge, like the Singhampton Project,” he says, pointing to a poster advertising the August event that features seven gardens with seven different themes and will culminate in a seven course dinner situated at his enchanting Eigensenn Farm.  “I don’t know. I guess it’s not radical, but it’s what artists do. My combination of food and landscape, that’s what I love.” Is he an artist or a chef, or an artist-chef? “You know, somebody I met a few months, ago told me that he never thought of me as a chef. I am an artist who loves to cook,” he said. “But a chef too.” That answers that.

The final stop, and just down the street in the neighbouring town of Creemore, was at Mad Maple Country Inn, which will open to the public in July. Owners Miriam Streiman and her husband Neil Epstein have been dreaming up this culinary destination for five years now and busy doing the renovations themselves for the last year. The place and surrounding property is beautiful. 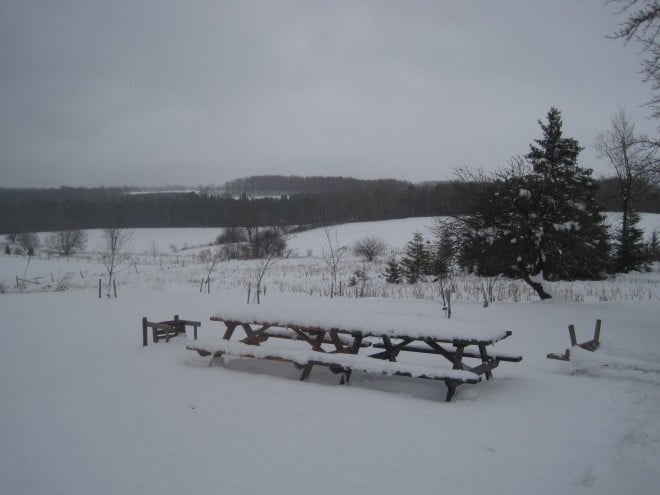 Everywhere you turned it was as pretty as a still-life. 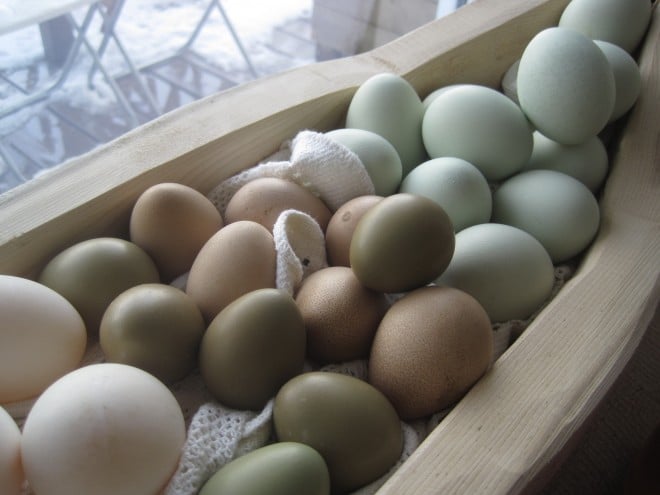 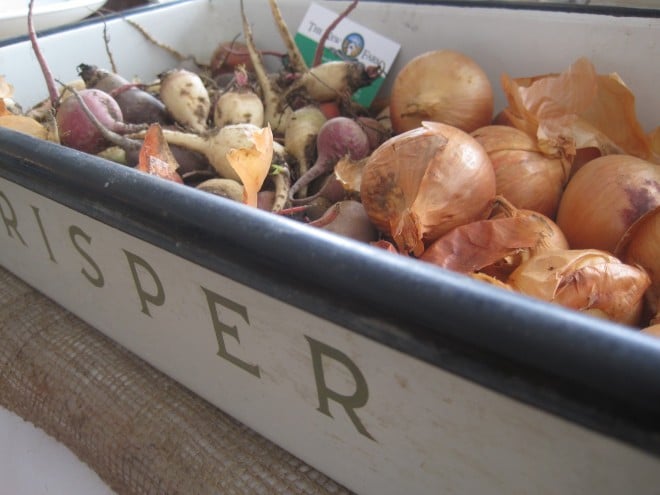 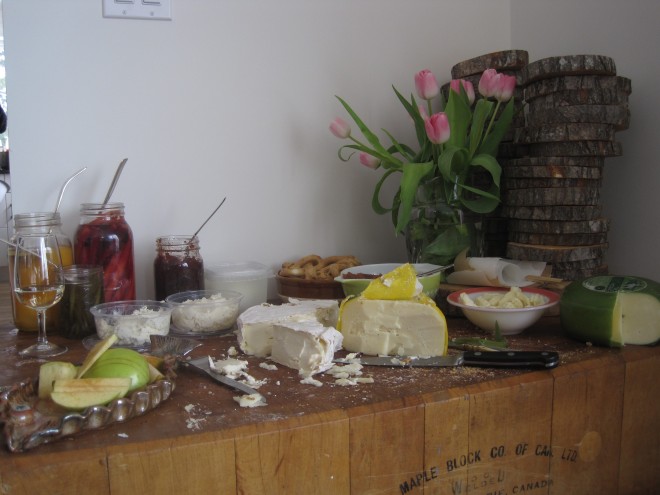 But the kitchen, a cook’s dream with its massive centre island covered in white marble, was where everyone congregated. It was like a mecca for good-looking chefs: there must have been a dozen of them buzzing about prepping, reducing, tasting and tossing. 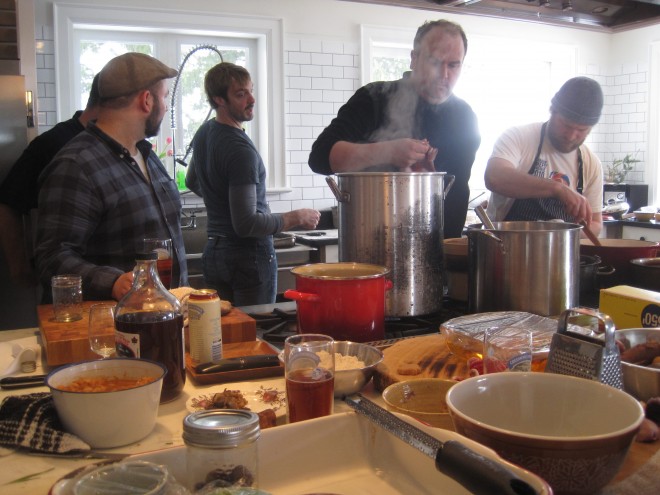 Attractive chefs in the kitchen 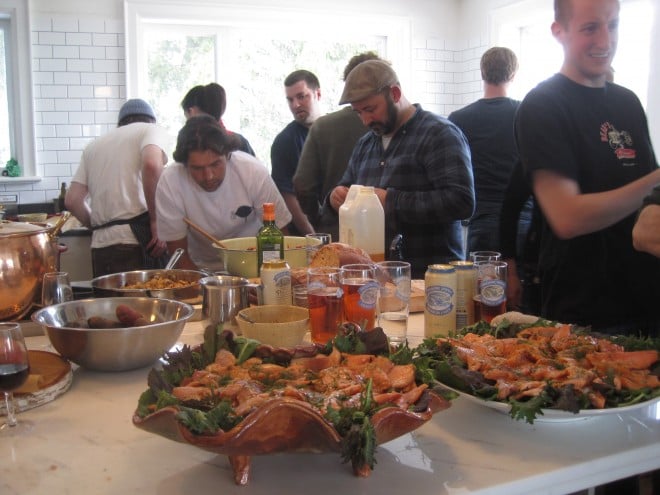 More attractive chefs in the kitchen

The food looked pretty good, too. Jeremy Charles, the Viking-like Newfoundland chef behind St. John’s Raymonds, which won Enroute’s Canada’s Best New Restaurant award last year (he and his business partner Jeremy Bonia are the only two guys to have ever won the award twice: the first time was in 2007 at Atlantica), kept his head down making wild Newfoundland rabbit with pappardelle, wild mushrooms, speck, wild mustard and fresh herbs. 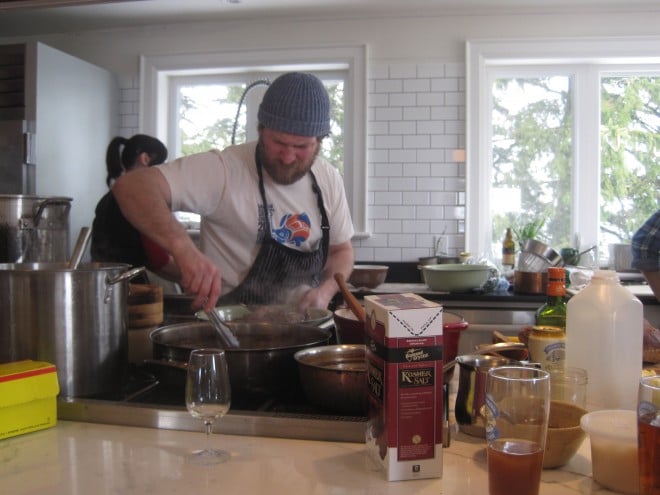 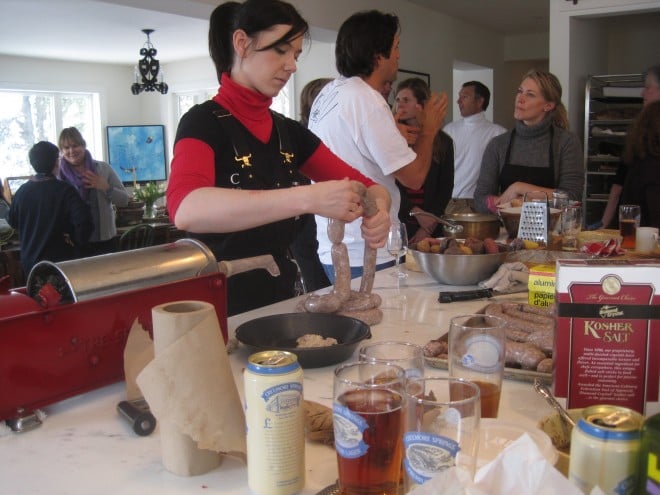 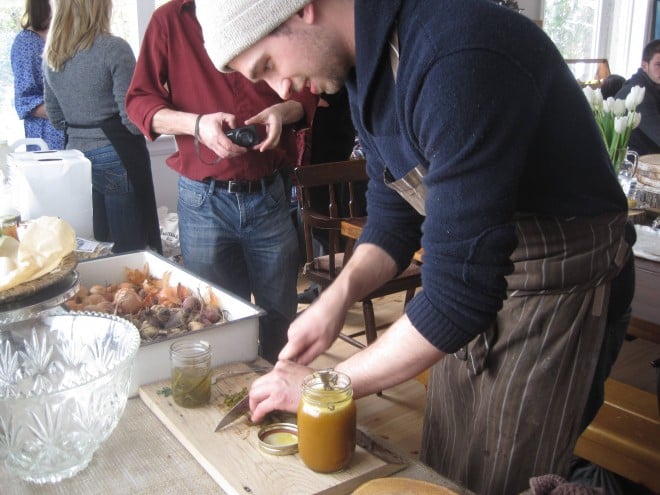 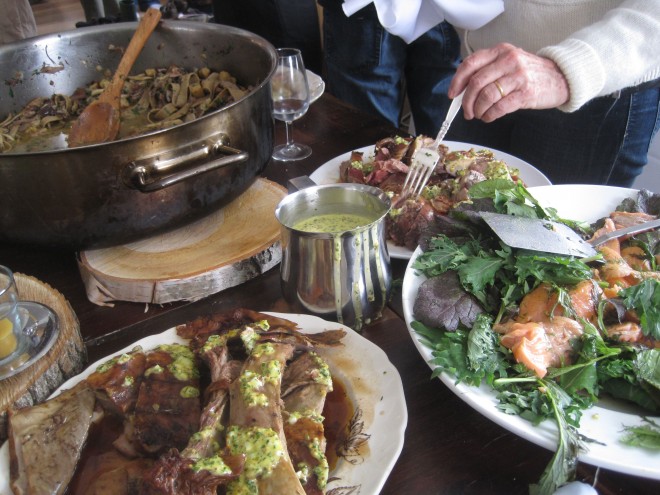 Some of the day's food fare

Many of the chefs had been speakers at the symposium the day before, and many of the speakers, including Barton Seaver, the above-mentioned National Geographic Fellow, wine writer and author Alice Feiring and New York restaurateur Ken Friedman, were on hand to help eat the feast. 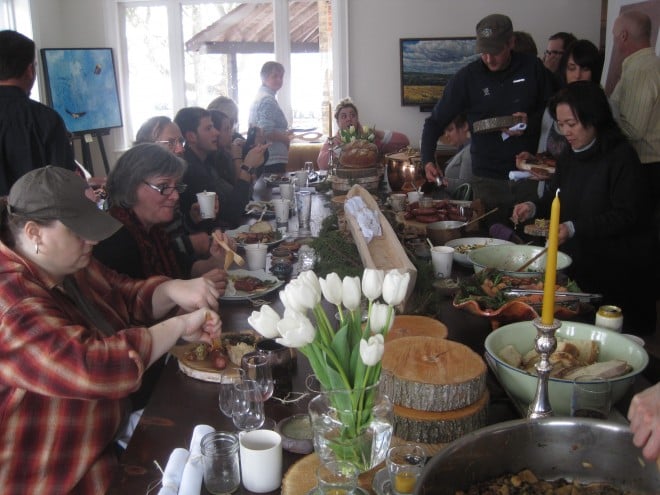 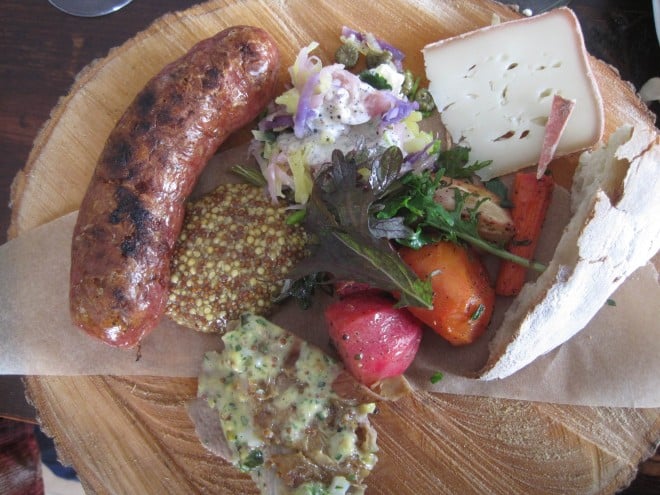 My dinner plate (round one)

I got a chance to speak with Friedman, right after downing Connie DeSousa’s fresh cheesecake with stewed rhubarb and almond crumb. 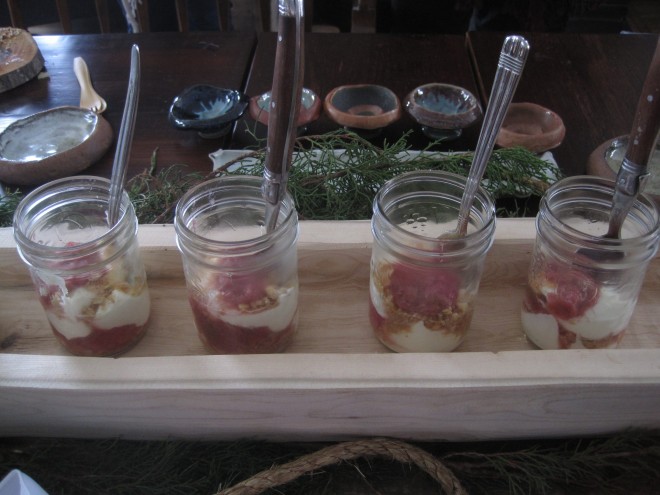 I was curious to know if he, who happens to co-own some of New York’s most successful, and fashionable, spots in town– The Spotted Pig, The John Dory Oyster Bar, The Breslin and The Monkey Bar–thought we Torontonians have a New York complex: so many people accuse us of trying too hard to be like New York, especially when it comes to restaurants. “I haven’t sensed that at all,” Friedman said. “Actually, it’s kind of the opposite. If you go to London, with all their taxidermy, reclaimed wood and hanging Edison light bulbs, it’s exactly like Brooklyn.” That we were surrounded by reclaimed wood and a deer head over the fireplace at Mad Maple wasn’t lost on him:  “But this is in the country, at a farm—it fits,” he explained. “In Toronto, you have your own personality. I went to a place that plays punk rock in the basement [Parts & Labour] and another place, Beast, that was really good and it was just the size of my bedroom, and I live in New York so it’s not that big. I think you have more identity than a lot of other places. I know that whole farm-to-table or fork-to-mouth thing is a cliché anymore but Toronto chefs actually drive an hour-and-a-half out of the city to visit their farmers and pick up produce and goods. In New York, we have farmer’s markets, but it’s not the same. We’d have to drive three or four hours. You guys have people who actually will raise pigs for you. That’s a real advantage.” And kind of radical, too. Freidman continued. “To be honest, I think Toronto is more influenced by Montreal. If I were a Toronto chef, that’s who I’d want to compete with.”

Before he left Mad Maple I asked Friedman if there was any truth to the rumours of him opening up shop in Toronto.  “Do you want to hear an anecdote?” Please. “When I worked for a guy named Clive Davis [yes, that Clive Davis], I was obsessed with signing this band. I was following them all over the world and just loved their music. I told Clive, we’ve got to court them, wine and dine them; we’ve got to do whatever it takes to get these guys to sign with us. I just loved them so much. And Clive said maybe the best thing to do was to let somebody else sign them so that I could just go on enjoying them. I think that’s how I feel about Toronto and Montreal. I just want to keep coming to visit, and to enjoy.”

After a day of doing nothing but eating and drinking the labours of some of this country’s most celebrated, and bound-to-be-celebrated, chefs, I know the feeling.