A fearless hockey player, his love of the game rubbed off on his children, whom he taught to shout, ‘He shoots, he scores!’ 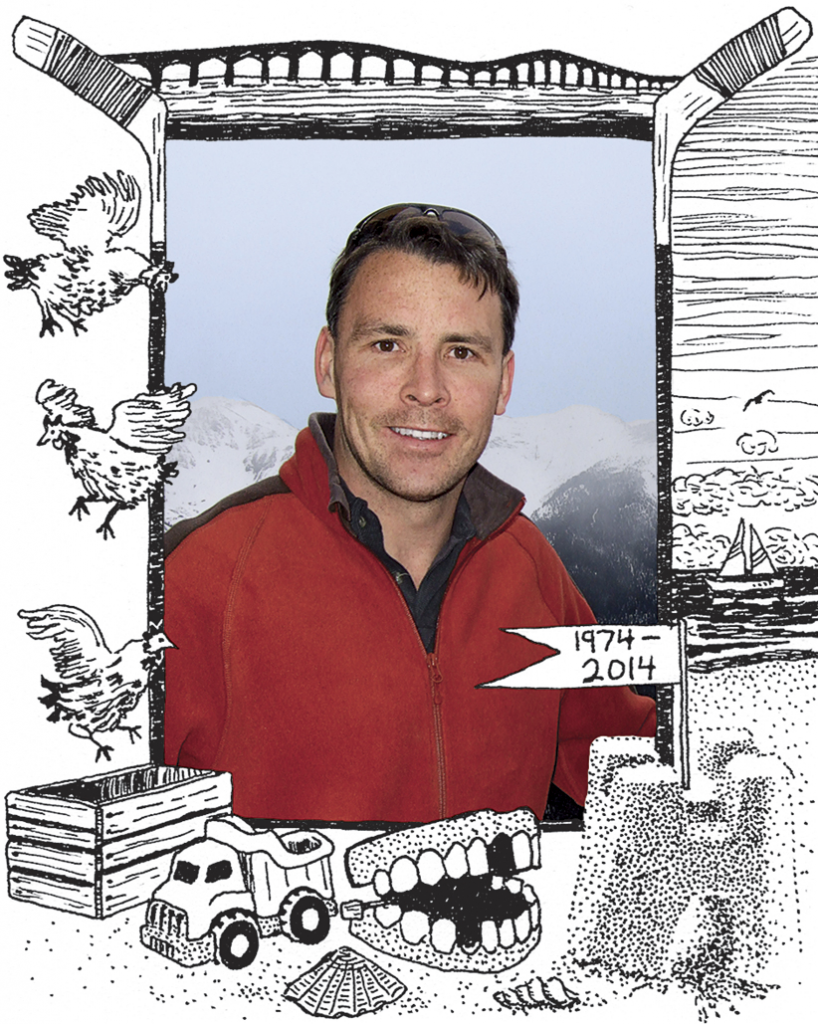 Aaron Brenton Coffin was born on Dec. 27, 1974, in Charlottetown to Brenton Coffin, who worked at an insurance company, and Donna MacLeod, a stay-at-home mom. Aaron was just one when his dad died of a heart attack while playing hockey. Two years later, Aaron’s mom remarried and they moved to Morden, Man., where Aaron got a younger brother, Derek Waltman.

Aaron was active and also prone to mischief. One day, en route to elementary school, he walked past a poultry plant and felt sorry for the chickens. He went inside and set them all free. “He always looked after the underdogs,” Donna says. Aaron’s mom and stepdad separated in 1986. With his mom and brother, Aaron moved back to P.E.I., where life revolved largely around hockey: street hockey in the summer and pond hockey in the winter.

At 15, Aaron became a swim instructor for the summer with the Red Cross, where he met Rachel Bruce. They started dating and it wasn’t long until they had a daughter, Alicia. As soon as their little girl came home from the hospital, Aaron took her on her first trip to his favourite beach at Basin Head Provincial Park. Still teenagers, Aaron and Rachel lived apart, and he would frequently take the hour-long trip to visit her and his daughter. Alicia would come out often to watch her dad play hockey. “A lot of those games I spent with my mom’s hands over my eyes because he’d be getting in fights,” she says. “I’d be peeling the hands off trying to cheer him on.”

When Aaron grew out his beard during the playoffs, his brother dubbed him “Wolfie” and the nickname stuck. While he was never the biggest guy on the ice, if an opponent tried to pick a fight with one of his smaller teammates, Aaron would jump in. “He was just fearless,” says Derek. After taking a puck to the mouth in one game, Aaron had to wear false teeth. “Subsequent to that, we’ve had a hard job finding any pictures of Aaron without his teeth out,” Donna laughs. “You go to take a nice picture of everybody smiling and Aaron will take his teeth out as a joke.”

When Aaron was 23, his mom had a daughter, Carley. Aaron now had a daughter who was older than his sister, and he embraced his fatherly-brotherly role. As a young dad, Aaron studied at the University of Prince Edward Island and worked various construction jobs, including work on the Confederation Bridge. After graduating with a degree in education, Aaron struggled to find full-time work, so he moved to Calgary to work in construction with Derek. When a teaching job finally became available in P.E.I. a few years later he hitchhiked home.

At 30, Aaron got the opportunity to teach at Alicia’s high school in Souris. He bought a house walking distance from the school so that his daughter and her friends would visit often. Aaron also loved travelling and chaperoned several school trips to Europe.

On a night out with friends in the spring of 2006, Aaron met Angela Swan. For a first date, he took her for a walk along the boardwalk in Victoria Park in Charlottetown. Their relationship grew quickly and that summer they took a road trip together across Canada. When they returned, Angela drove the hour-long trip from her house to Souris every weekend with her dog, Porter. After a few weeks, Aaron invited her to let Porter stay at his place. “The dog moved in before I did,” Angela laughs. They married in 2009.

Around that time, Alicia graduated from high school. Aaron decided on a career change and found a new job with a wind energy company, doing maintenance on turbines. He travelled often with his work until May 2010, when he and Angela had their first child, Brent. Two years later, they had another son, Theo.

Aaron was a hands-on dad, playing with toy trucks or letting the boys bury him in sand at the beach. “The kids weren’t ever bored,” Carley says. Aaron’s love of hockey rubbed off on the kids, too. He taught them to shout “he shoots, he scores” after a goal and to cheer for the Ottawa Senators and boo the Toronto Maple Leafs.

On April 2, Aaron, who spent much of his free time at the hockey rink, was working as a linesman during a junior hockey game. Midway through the second period, he skated off the ice when he had difficulty breathing and his heart began to race. He died soon afterwards of a heart attack. He was 39.