A rebellious child, he quit school to work construction. Paralyzed in a work accident, helping at-risk youth became his passion. 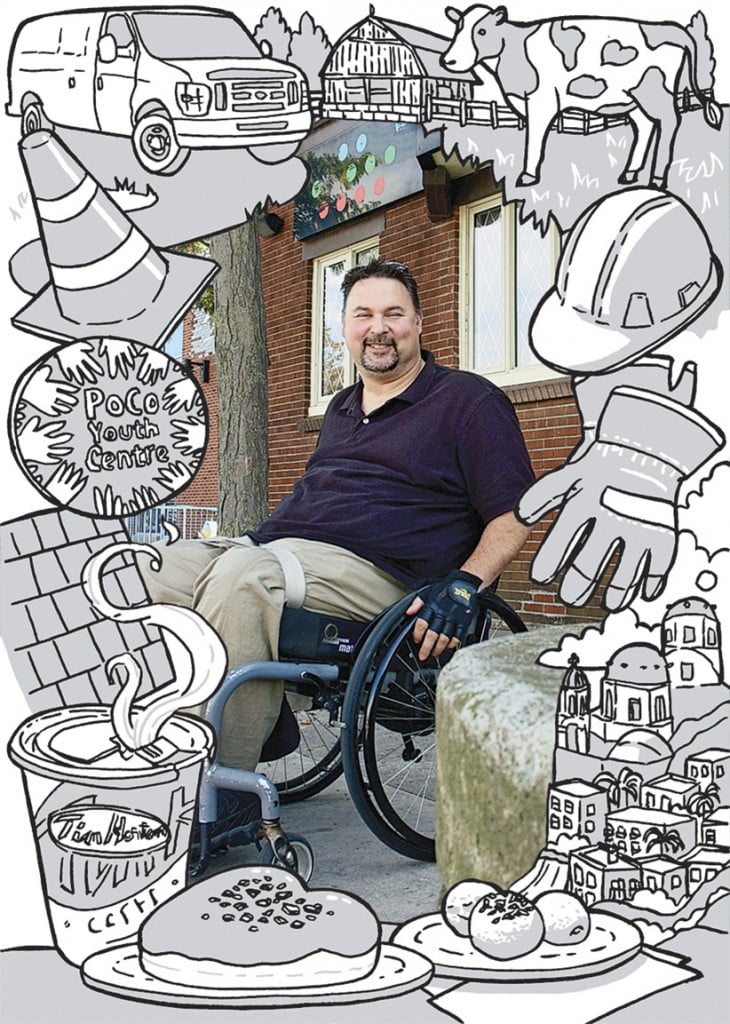 Alexander Kapellas was born on Aug. 12, 1972, in Winnipeg, to Pauline, a stay-at-home mom, and Steve, who worked in construction, mostly installing siding and windows. A sister, Penny, was born two years later and the family moved from Manitoba to the rural farming community of St. Ann’s, Ont., in the Niagara region.

Life on the farm led four-year-old Alex to become a bit of a troublemaker. “We had a few cows and, somehow, he let them loose,” Pauline says. When she tried to discipline him, “he made me chase him through the field.” Alex was very protective of his little sister. As the two grew a bit older and Penny started to think Santa didn’t exist, Alex took her on a long tour of the farm to show her where reindeer landed the year before. “It could have been a mark from ducks or whatnot,” Penny says. “It was important to him that I still believed.”

Alex was a big music fan. For a junior high school lip-sync contest, Alex, with his long hair and sideburns, dressed up in tight jeans and a leather jacket to sing Jailhouse Rock like Elvis Presley. “He had the swinging of the hips perfect,” Penny says. “Everybody was laughing and clapping.” He was not, however, a fan of school or of doing chores around the farm. At the age of 13, he started to go on construction jobs with his dad. In high school, Alex started to rebel. He smoked, tried drugs and partied. He moved to Greece, where his grandparents lived, and helped out at the family restaurant. He came back home a year later. At 17, after dropping out of school, he took up full-time construction work alongside his father.

After a couple of years, Alex ran into Michelle Vos, whom he knew through mutual friends back in high school. “I was waiting for Alex to ask me out, and he wasn’t,” Michelle says. “After a week of waiting, I thought, ‘Forget it. I’ll just ask him!’ ” In 1994, they started dating, often going to Tim Hortons for long chats about life and the future. When Michelle told him she was pregnant with their first child, Alex proposed the next day. They married in January 1995. That June, they had a girl, Amber. They added another daughter, Meghan, three years later, then a son, Stephen, in 2000. Alex was a strict yet soft father. “He was quick to hand out a grounding, then he’d usually cave,” Michelle says.

He started to work evenings at a chicken-processing plant, and kept up his regular window installation work during the day. When the hours from both jobs became too much, Alex quit his work at the chicken plant in 2007 to open his own business, World Class Exteriors, doing home renovations and installations. “He loved physical work,” Michelle says. “To be out there all day on a roofing job in the sun, to get his first sunburn of the year, he felt so good.”

On Jan. 22, 2010, Alex was on a job installing windows when, near the top of a ladder by the second floor, his right foot went through a rung and the ladder toppled sideways. Alex broke three vertebrae. He would never walk again.

Alex could still write well enough with his right hand and could move the thumb and middle finger on his left hand. Despite his limited mobility, he insisted on a manual wheelchair instead of an electric one, so he could at least push himself around. At the hospital, “They called him ‘Super-quad,’ ” Penny says.

After Alex was released from the hospital months later, a custom blue Ford van allowed him to control the gas and brake with one hand while the other hand manoeuvred a spinner knob on the steering wheel. He nicknamed the car “the Beast,” and drove his kids to sports practices all over town.

In 2012, inspired by a friend, Alex decided to open a youth drop-in centre in Port Colborne. The project quickly became his passion. He took night courses at Niagara College to learn counselling skills and how to work with at-risk youth. He helped to set up a board of directors while promoting what the meeting place would offer. The PoCo Youth Centre opened on Sept. 22, 2014. Every week, more and more people showed up and Alex would be there with pizza and drinks, ready to help the kids in any way he could.

On Oct. 21, Alex went out late in the day to meet a friend for coffee. He didn’t feel well and decided to drive home. The following morning, Alex was found dead in his van pulled over by the side of the road. The police say there was no foul play involved, but the exact cause of death is still unknown. He was 42.