A devoted environmentalist who loved to bike and travel, when not working one of her several jobs. She was wise beyond years. 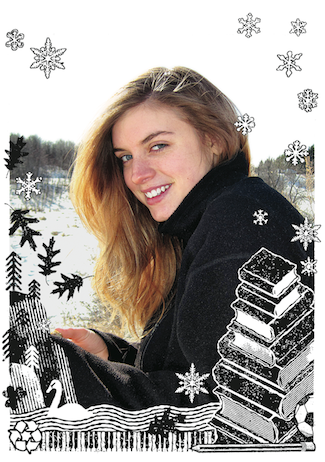 Amy Jordan Gilbert was born in Winnipeg on Sept. 18, 1990, to a single mother, Alison Gilbert, who worked as a receptionist. Her biological father, Noel O’Brien, was a butcher in Ireland. Amy was a precocious child who, early on, showed a love for learning. Alison says that when Amy was just six months old, “I could read aloud the newspaper or children’s stories for hours. She wouldn’t fall asleep. She’d just sit there with her big eyes open and truly listen.”

At four, a lump grew on Amy’s neck that turned out to be neuroblastoma, a rare type of childhood cancer. As the family prepared for it to be surgically removed, Alison carefully read Amy all the brochures while doctors demonstrated procedures using her doll as a prop. “You had to explain things to her or she’d go into a panic,” Alison says. The only test they forgot to describe was the X-ray. Upon seeing that machine, a scared Amy left the room until they told her it was just a big camera. “She went back in and smiled for the camera, even though it wasn’t taking pictures of her face,” Alison says.

The surgery was a success and, healthy again, Amy became active in Irish dancing, piano lessons and soccer. A nature lover from a young age, she enjoyed going to the family cottage near Kenora, Ont., to hike, swim and build forts. She especially loved the winter and went for walks outside every time there was a blizzard.

When Amy was 12, her mom married Brian Wall. Amy went from being an only child to having two stepsisters, Bailey and Brooklyn. Adjusting to the blended family was tough, at first. She would take solace in her books, especially those about historical figures. At 13, she asked for an 800-page biography of Winston Churchill for Christmas. “She was an old soul in a very young body,” Alison says. It wasn’t long before Amy grew close to her sisters (a year and two years younger than she), bonding on walks to the nearby park to chat about boys or high school. Though she loved television, Amy sometimes fantasized about living in simpler times. “Most kids pretend they’d like to go back and live in a castle,” Bailey says. “Amy wanted to live as they do in Little House on the Prairie.”

After high school, Amy spent several months volunteering with an environmental group in New Zealand. Wherever she went, she was adamant about recycling, and diligently researched household products to make sure they had no toxins. She was a vegetarian and even carried special bags for weighing the fruits or vegetables at the grocery store to avoid using the plastic ones. Her friends called her “granola girl” because she was so environmentally conscious.

After backpacking through Central America with Bailey in the spring of 2010, Amy moved with her sisters to Vancouver. Even though she was an adult, Amy’s “tiny” voice made her sound a lot younger, says Brooklyn. “When ordering a pizza, they would ask her to put her mom on the phone.” After struggling to find meaningful work in B.C., Amy decided to return to Winnipeg soon after and study environmental science.

Late in 2010, she met Graham Madden at the University of Winnipeg. The two started to sit next to each other in class and the relationship grew slowly. In March, for a first date, they went to yoga. Sharing a passion for the outdoors, the two spent weekends at the cottage or went on bike trips. Always up for adventure, Amy joined Graham to travel around the island of Fiji in 2013. She spent plenty of time formulating her thoughts into writing and was constantly buying new journals that caught her eye. “She had 80 journals with the first 10 pages written in them,” Graham says.

Amy was also a workaholic, who kept two or three jobs during school. Although she had her driver’s licence, she would walk or bike around town, even if trips were several kilometres long. Through a co-op placement, she also worked at the Experimental Lakes Area in Ontario, testing the effects of toxins on water quality and fish. In her few spare moments, however, Amy loved researching “fun facts” to quiz her friends on random trivia such as: “What day is National Play-Doh Day?”

On April 5, Amy left work at the eco-friendly store Generation Green in the afternoon and stopped at home before heading off to another job at Cinematheque, a local art-house theatre. While crossing the street at a crosswalk, Amy was hit by a car. Two days later, she was declared brain-dead. Amy donated her heart, liver, kidneys and pancreas. She was 23.