From childhood, he had a passion for vehicles. Though he sometimes worked 18-hour days, he also loved to relax by camping and ATVing. 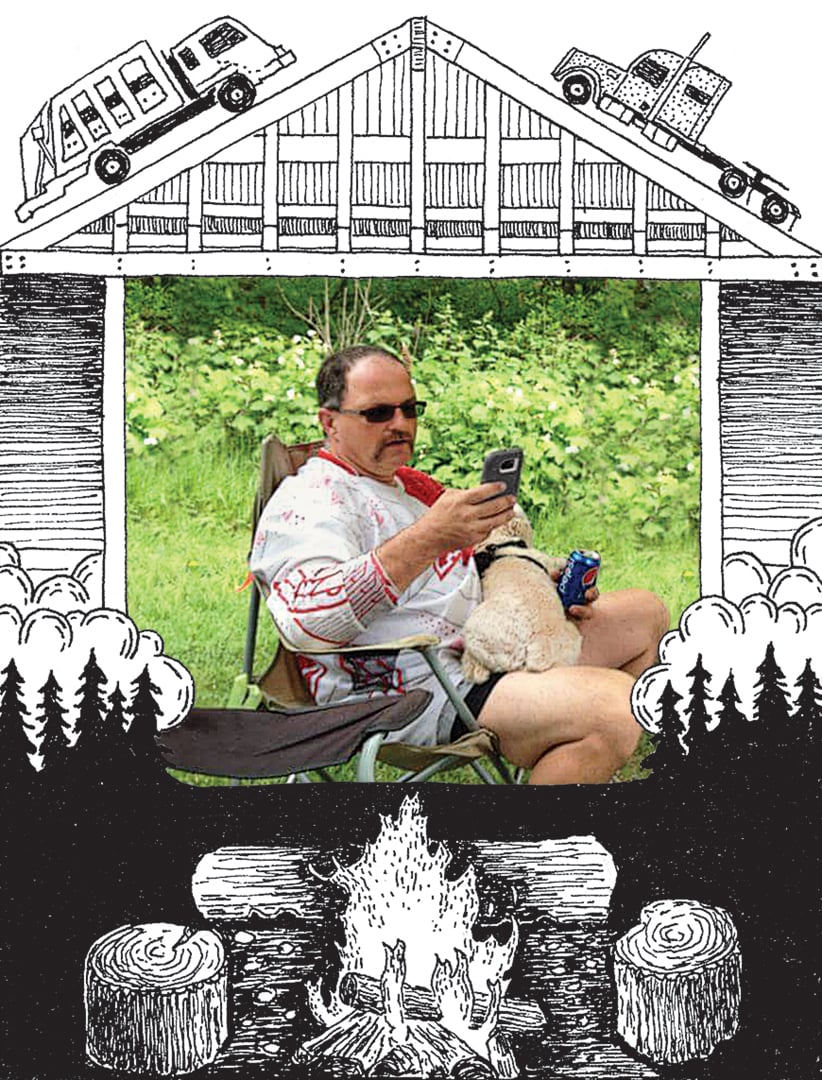 Andy Rotzetter was born on Dec. 14, 1967, near the village of Grossguschelmuth, Switzerland. His father, Marcel, had a construction business and his mother, Heidi, was a homemaker. They had three children. Andy was followed by Ingrid in 1969, and Ron in 1971.

In 1980, when Andy was 13, his parents moved to Grunthal, Man., where they bought a dairy farm. At first, Andy barely spoke a word of English. Decades later, just one English word stumped him: He would say “whehicle” instead of “vehicle.” Andy learned how to drive trucks and equipment on the farm and developed a passion for cars and trucks. As a young man, he had a yellow 1967 Camaro that he cherished and later regretted selling. “He was a really good kid,” says his father. “Good with kids, good with animals, and good with machines.”

In 1983, Manitoba’s winters spurred Heidi and Marcel to move the family to Clearwater, B.C. Marcel started a homebuilding business. Andy and Ron both worked with him. “We were brought up to work hard,” says Ron.

Andy, Ron and their father were doing construction in Cloverdale, B.C., in 1990, when they strolled into a Mac’s convenience store and Andy spied a woman named Belinda Cauldwell working behind the counter. “He and his brother and his dad, because they stayed just down the street, used to come in all the time and torment me and my girlfriend, talking to us,” Belinda says. “Andy was always finding an excuse to come in and buy something, whether he needed it or not.” On their first date, she laughs, they went to a pub with Andy’s father.

That year, Andy moved to Cloverdale (now part of Surrey) to be with Belinda, getting a job as a forklift operator and truck driver. Belinda and Andy had their first child, Natasha, in 1991. In 1992, they married in a park in Langley, B.C. Two more boys followed: Steven in 1994, and Ryan in 1996.

“He could work an 18-hour day,” says Ryan, “but when we got the chance to go camping, he would sit back and relax. He loved his peace. He loved camping, ATVing and spending time with family.” Towing a 24-foot trailer, the family camped, as Ryan puts it, “from the top of B.C. to the bottom.” The family also got into riding ATVs and went every weekend they could.

In 1995, worried about growing gang violence in Surrey, the Rotzetters moved to Chilliwack. Andy started working in waste recycling and disposal. In 2007, he also started a family business called Rotz Disposal where he, Belinda, and the kids worked evenings and on weekends. Andy eventually wound up working for Progressive Waste. He loved his work, says Belinda. “Little kids would run up to him, asking if he could honk the horn or if they could look inside the truck. Just something small like that would make his day.” Two years ago, recalls Belinda, there was an elderly man at an apartment building who waved to Andy every day that he came to take garbage. After learning the man was seriously ill, Andy gave him a toy cast-iron garbage truck. When the man died, his wife invited the Rotzetters to the service, where the family spoke about how much Andy’s kindness meant to them. He was deeply touched, says Belinda, “to know something that small meant so much.”

Andy’s friends in the waste business wondered how he did his job and ran his business, yet still found so much time to take his kids camping and to car races. “We couldn’t figure it out,” muses Terry Coburn, who learned how to drive a garbage truck from Andy 22 years ago. “We thought he should have been dead 10 years ago, because he should have been that tired.”

As nature lovers, Andy and Belinda were often disgusted by the amount of illegal dumping they saw near rivers and campgrounds around Chilliwack. Years ago, they organized what became an annual clean-up at Peg Lake near Chilliwack. Later, they moved the initiative to Gill Road, along the Fraser River. Hosted by Rotz Disposal and several other organizations, the clean-ups attracted more volunteers every year. One year, says Belinda, they collected nine tons of trash.

On May 17, Andy and Belinda were riding ATVs with a friend along the Windy Knob Trail. On a narrow stretch flanked by rocks on one side and a cliff on the other, Andy stopped to help two women dismount and walk the section to safety. He was returning to help another male rider when that driver accidentally accelerated, striking Andy and knocking him over the cliff. He was 47.