Arrested Development's elephant in the room 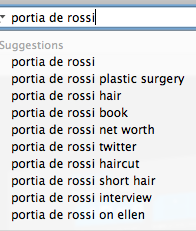 More disheartening for me than the lack of laughs in the first four episodes of Arrested Development’s new season was what appears to be Lindsay Bluth’s new face. (Google autofill suggests that others noticed it, too.)

In fact, actress Portia de Rossi’s streamlined forehead and sunken, wide-open eyes were so distracting that I couldn’t keep pace with the narrative, especially when seven-year-old clips from season 3 were cut in, making de Rossi’s tweaked features crystal clear.

Why, Portia? Why? Especially after this January when you turned 40 and said, “The one thing I don’t wanna do is chase what I looked like at 20.”  Of course, she’s not the first. The list of those who appear to have had work done is long, and doesn’t just include celebrities over 40, like Lara Flynn Boyle, Jessica Lange, Joan Allen, Courtney Cox and most Real Housewives, but also younger women, like Lindsay Lohan (26), Megan Fox (27), Zooey Deschanel (33)–even Hillary Duff (25).

Over the last year I’ve grown obsessed over the increasing regularity with which celebrities are transforming their faces with Botox and fillers. I’ve highjacked work lunches and dinner parties in order to discourse on the topic: Do you think they look better? Do they think they look better? Didn’t their doctors tell them to stop while they were ahead? Is there a social anthropologist researching this? Why aren’t more people talking about it? I’m not shocked that celebrities want to–and often argue that they have to–look younger: What I’m fascinated by is the fact that they, who we assume have both the means and the access to hire the best, most deft surgeons to inject their faces with fillers, take the monumental leap from looking fresh to looking more like chipmunk-cheeked, cat-eyed dolls.

I know women, mostly in their 40s, who’ve had facial injections, only I had to be told about it after pestering them with questions about where I could get whatever face cream  made them look so vibrant. They all inevitably whisper, “It was Botox!”

If they managed to come out of the doctor’s office without puffy cheeks, misshaped lips and swollen foreheads that make their eyes look like they’ve sunk a few inches back into their skulls, how is that celebrities have the procedure done and never look younger or better but only, well, like they had work done?

Lainey Lui of LaineyGossip and CTV’s eTalk coined the term L.A. Face in 2010 while she was in Los Angeles: “An LA Face walked out of every store, every five minutes. Every movie producer is married to an LA Face…at first it’s trippy. And then it becomes frightening.”

And over a year ago she wrote, “I’ve never heard anyone say about someone who’s had a lot of plastic surgery that ‘OMG the way they’ve jacked up her cheeks and her lips like that is SO f–king amazing’. ??Buuuuut… it’s showing up everywhere,” explained Lui. “The people who are doing it obviously think it looks good. They want to have the LA Face. Either that or someone is telling them to want to have the LA Face. And a lot of people already have the LA Face now. So much so that at some point, it could become the new beauty standard to represent an entire society, if it hasn’t already.” 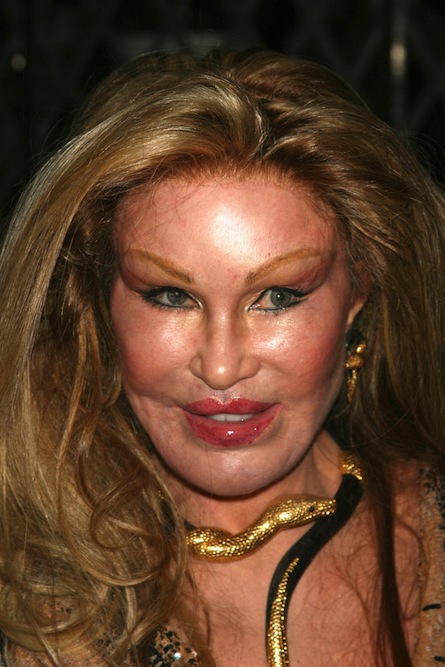 I agree. Remember back in the ‘90s how disturbed everyone was when New York socialite Jocelyn Wildenstein began to transform her face through a series of plastic surgeries so that it looked cat-like?  If you take a look at her today, she still looks frightening, but scarier yet is that so does half of Hollywood. And I don’t buy the argument that with HDTV, performers have no option but to adjust their faces, because, for me at least, all high definition does is clearly define the fact that they had a procedure, rather than improve their appearance.

And aside from gossip magazines speculating on who’s had what done, no one is actually analyzing the phenomenon itself, which has got to rank as one of the most shocking shifts in Western society’s perception of beauty–up there with mile high Louis XIII-style wigs, Elizabethan porcelain-like skin courtesy of a white lead and vinegar mixture, and the organ-crushing corset that stayed sartorially de rigueur for over three centuries.

I fear the only way my curiosity surrounding all of this will be satiated would be a round table with celebrities and their doctors where I get to ask endless questions. But it better happen soon because if we blink, while we still can, L.A. Face may become more commonplace than concealer.