Editorial: It's time for Canada to increase highway speed limits

B.C. is going to let drivers go 120 km/h on some highways. The rest of Canada needs to get up to speed. 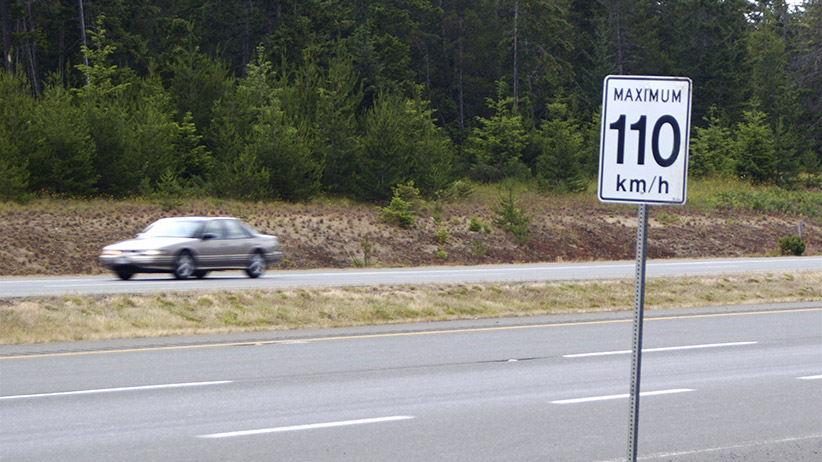 No one quibbles about the benefits of democracy when it comes to Parliament or city hall. But what about roads and highways? Should speed limits also be set by the opinion of the masses?

Yes, as a matter of fact, they should. And British Columbia deserves national recognition for having the good sense to introduce the benefits of majority rule to its highway system.

Last week, B.C.’s Transportation and Infrastructure Minister Todd Stone announced a wide slate of changes to his province’s 9,100-km network of rural highways. The most significant and controversial of these will raise the speed limit on dozens of highways.

It will soon be possible to go up to 120 km/h on some B.C. highways−the fastest speed limit in Canada. Many routes will see maximum speeds raised by as much as 20 km/h. These changes have been met with predictable complaints from the RCMP and the B.C. Association of Chiefs of Police, who claim that higher speeds will lead to more accidents, as well as from environmental groups outraged about increased pollution. In truth, there should be no appreciable impact on safety or the environment. The changes will simply allow people to get where they’re going in a lawful and timely manner.

Why there is no such thing as a safe teen driver

Should elderly drivers be subject to special testing?

There’s ample evidence going back many decades that proves most drivers pick their travel speed based on driving conditions and road characteristics, rather than posted limits. Dropping maximum speeds in an effort to make roads safer has little impact on how people actually drive. A U.S. government report on the topic concluded: “The majority of motorists do not alter their speeds to conform to speed limits they perceive as unreasonable for prevailing conditions.” By the same token, raising limits doesn’t produce faster average speeds; it merely makes lawful what is already common behaviour. (When B.C. raised the speed limit on Highway 1 at Tappen, near Shuswap Lake, by 10 km/h in 2006, the average driver’s speed didn’t change.)

Road engineers agree highways are safest when the differential between the slowest and fastest vehicles is at a minimum. A large gap between drivers’ speeds is most often found in situations with artificially low speed limits and this can lead to dangerous passing attempts, unpredictable behaviour and driver frustration: all of which most certainly cause collisions. When B.C. last raised rural highway speeds in 1997−from 90 km/h to 100 km/hr−the number of serious collisions fell by 18 per cent in the following five-year period. And this coincided with a time when traffic volumes rose nearly a third! Rather than allowing police or noisy lobby groups to impose unnaturally low speed limits, the safest solution is to simply accept the wisdom of driver democracy.

“Speed limits should be set so that they include the behaviour of the majority of drivers and provide an appropriate maximum speed,” reads the background report released by the B.C. government last week. In this regard, the most reliable engineering standard is to pick a maximum speed that 85 per cent of drivers already obey. On Highway 19 from Parksville to Campbell River, for example, government data shows the 85th percentile speed to be 121 km/h. As a result, the speed limit is to be raised from 110 km/h to 120 km/h. In other words, drivers themselves are deciding the safest maximum speeds. Government polling data shows local support for many of the individual speed limit increases to be in the 80 per cent range.

Enforcement of the laws of the road will naturally remain important after these changes. However, the moves should free police to focus their efforts on stopping the 15 per cent of drivers who exceed accepted norms and behave in ways that are obviously dangerous to themselves and others: driving drunk, distracted driving, racing, etc. While this may prove more difficult than setting up speed traps that ensnare average drivers who happen by, it will have a much greater impact on public safety.

Another novel innovation for B.C.’s roads involves variable speed limits on certain highways. Changeable LED road signs, similar to signs that alert drivers to upcoming congestion or accidents on urban highways, will adjust speed limits based on weather or other conditions on remote or mountainous routes. Since drivers already alter their driving speeds to conditions around them, providing this sort of real-time information should further improve road safety.

By emphasizing engineering principles and trusting observed data on human behaviour, B.C. is bringing its highways into agreement with how residents already use their roads and signalling a new, lighter touch in roadway regulation. With luck, the rest of Canada will pay attention to this refreshing approach. Other jurisdictions in immediate need of enlightenment include Ontario’s 400 series highways and Quebec’s autoroutes: both of which boast an absurdly low and much-ignored 100 km/h speed limit.