BabyDoze: This app's a sleeper

This smartphone app plays the sounds from a real woman's womb 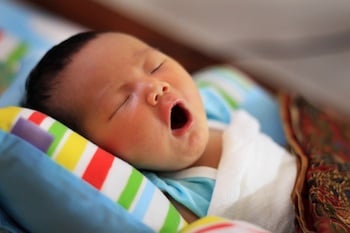 A Canadian singer-songwriter has created a smartphone app that is promising to cure the sleepless baby. Barry Authors, a.k.a J.J. Barrie, whose 1970s hit No Charge still plays on the radio every Mother’s Day (A mother tells her child: “And when you add it all up, the full cost of my love is no charge”), says the real womb sounds used in his BabyDoze app “work 99 per cent of the time.”

BabyDoze will join a host of apps claiming to help sleepless babies. For $3.99, Ultimate Baby Sleep Aid detects if a baby cries and plays soothing sounds or lullabies; for the same price, MagicSleep claims to have recreated sounds from inside the womb with help from digital technology.

But according to Authors, BabyDoze is the first app to play the real sound; what you hear is the blood flowing from the mother into the placenta, which, he says, sounds “like a choo-choo train.”

It is the sound of the uterus of his own wife, Denise, on the app, which is available for $5.99. They recorded it in 1985 at Queen Charlotte’s Hospital in London, England, when they were expecting their first child, after reading about a study concluding womb sounds soothed restless babies. Hospital staff helped and they used an intrauterine microphone, ultrasonic equipment and a Doppler machine.

Authors released BabyDoze on tape and “sold out every copy.” That was the end of it, until five months ago, when, back in Canada, he hired a computer sciences student to develop the BabyDoze app. For new parents out there, Denise has one piece of advice: “It should be played quite loud. It’s loud in the womb, you know.”