Behind dominant pitching, the Blue Jays live another day

Motivated by a raucous Rogers Centre crowd, Marco Estrada pitches a gem—and puts his team on a plane to Kansas City for Game 6 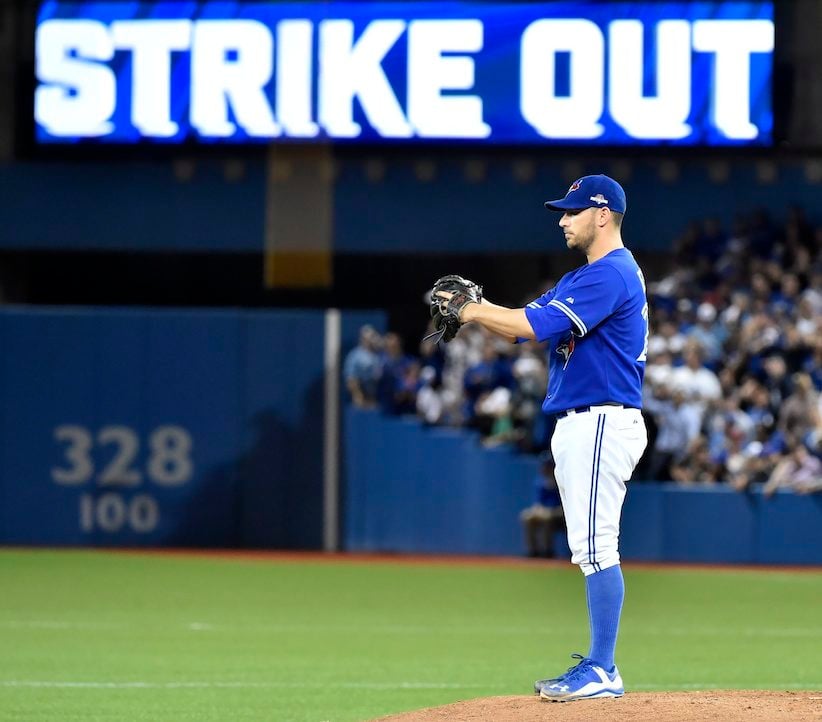 A few hours before Wednesday’s first pitch, a long row of suitcases lined the wall outside the Blue Jays clubhouse, packed and zipped. Win, and that luggage would be loaded onto a plane bound for Kansas City. Lose, and each bag would go its separate ways. Season over.

Marco Estrada made sure those clothes made it to the airport.

Down 3-1 in the American League Championship and staring at a do-or-die Game 5, the Blue Jays righthander picked apart Royals hitters through seven-plus innings, stifling a dangerous offence until his own found a way to bust wide open. By the time Estrada surrendered his first run—an eighth-inning solo homer of the bat of K.C. catcher Salvador Perez—Toronto was well on its way to living another day.

“A master at what he does,” said manager John Gibbons.

Twenty-four hours after the Jays were absolutely trounced—a 14-2 loss in which the starting pitcher, knuckleballer R.A. Dickey, couldn’t get past the second inning—Estrada and his trademark changeup made the Game 4 debacle a distant memory. Through seven innings he never sniffed danger, striking out five and allowing one measly hit: a groundball that trickled just past the outstretched glove of shortstop Troy Tulowitzki. No Royal even reached second base until Perez’s home run in the eighth.

In the post-game clubhouse, Estrada received a steady stream of hugs from teammate after teammate. With the stakes so high, his performance could not have been much better. “It’s the start that we needed,” Tulowitzki said. “They’re a great team over there, we know that, but this guy kept them off balance and allowed the offence to settle in and get some runs.”

It took a while for those runs to come—with a little help from home-plate umpire Dan Iassogna.

Royals starter Edinson Volquez was nearly as sharp as his counterpart through the first five, coughing up a second-inning home run to Colabello but nothing more. In the bottom of the sixth, though, Volquez blinked, walking leadoff hitter Ben Revere then plunking Josh Donaldson on the elbow pad, putting runners at first and second for Bautista, nobody out. The count full, the Jays’ slugger fouled off four straight fastballs before watching a breaking ball sail by. It was such a borderline pitch that Iassogna could have called it either way. The ump chose ball.

“It was very close,” Bautista later conceded. “You could argue that I got the benefit of a borderline call. Bottom line is I ended up on first.” (Not surprisingly, Royals manager Ned Yost saw things differently: “I thought the pitch to Bautista was definitely a strike.”)

The bases now loaded, the Jays took full advantage. After another walk to Edwin Encarnacion made it 2-0 and chased Volquez from the game, Tulowitzki smacked a bases-clearing double into left-centerfield, plating three more birds and turning a pitcher’s duel into breathing room. “That’s when you want to be up, when the game is on the line,” said Tulowitzki, acquired earlier this season at the trade deadline in a blockbuster deal with the Colorado Rockies. “Sometimes you’re not going to come through, sometimes you are. Today I was fortunate enough to come through.”

The all-star shortstop has knocked in 11 runs this post-season, two shy of the Jays’ playoff RBI record held by 1993 World Series MVP Paul Molitor. But like the rest of his teammates, he heaped all the credit on Estrada and his timely right arm. “I can’t say enough about this guy,” he said. “He was obviously special tonight.”

Estrada was on the hill the last time the Jays needed to ignite a three-game winning streak: in Texas, down 2-0 to the Rangers in the first round. He twirled a gem that day, too—and Tulo provided the supporting swat, a three-run home run. But for Estrada, Wednesday’s game was undeniably different. Home field. Packed house. Deafening applause. “It’s been a while since I pitched here, and I forgot how great our fans are,” he said. “It was pretty loud today. I had a lot of adrenalin going.”

When Gibbons waddled to the mound in the eighth, pointing to the bullpen and taking the ball from his starter, the Rogers Centre crowd exploded. “I put my head down, walked out, and just tried to take it all in,” he said. “It was an incredible feeling, walking off the mound seeing all the support that this team has gotten the entire year, not just today.”

That support, coast to coast, will continue for at least another game. Canada’s baseball team came in Wednesday needing to win three in a row to reach the World Series. One down, two to go.

“I don’t think any of us are ready to be done yet,” Colabello said. “We were trying to get it to the next game, obviously, but we can’t try to overtake three games in one. When you try to do that, it seems a little bit more insurmountable. But if you go out and play the game one pitch at a time, one inning at a time, it seems a little bit more manageable. I think we did that today, and here we are going to K.C.”

The bus to the airport left the stadium at 8:15 p.m. The luggage went, too. A television monitor in the clubhouse reminded players—in all capital letters, for extra emphasis—not to forget their passports.

“We’ve allowed ourselves a chance to play another game,” Bautista said. “We just have to come into Kansas City and play like we did today.”

David Price, the Jays’ other big-name newcomer acquired at the trade deadline, will get the ball for Game 6, hoping to mimic some of Estrada’s magic (to burn yet another adjective).

“It’s not going to be easy,” Tulowitzki said. “Our backs are going to be against the wall, but you look at it: you’ve got to win two games in the grand scheme of things. It’s possible. And that’s how we’re looking at it: win the next game, get to Game 7, and anything can happen.”

Pack your bags and buckle up.