Bench to bench: The science of wines

Researchers in genetics, biology and climatology are working in labs to improve what we find in our glasses 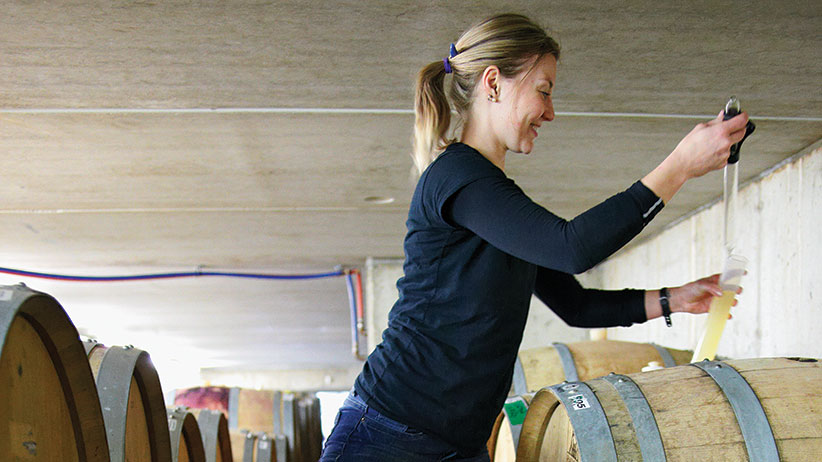 The humble micro-organism used to ferment wine, has 6,000 genes. But though scientists studying yeast have figured out the function of 5,000 of them, they still have no idea what the other 1,000 genes do, says Hennie van Vuuren, a molecular yeast geneticist and director of the Wine Research Centre at the University of British Columbia. His team recently pinpointed the function of two yeast genes; their findings could solve problems that have plagued winemakers for centuries.

As fermentation occurs, yeast produces acetic acid (also called “volatile acidity”). It isn’t dangerous, but at high levels will create a vinegary, unpleasant taste. “Just by knocking out one gene, we can reduce the volatile acidity by 38 per cent,” van Vuuren says. Flipping off the second gene stops the formation of hydrogen sulfide, another by-product that produces a stinky, rotten-egg smell. The UBC team has filed patents for both yeast strains, which they achieve through breeding (rather than by genetic modification). Thanks to van Vuuren and his yeast, two winemaking pitfalls might soon be a thing of the past.

Climate change is bad news for the planet, but for Canada’s wine industry, “the benefits, in many cases, outweigh the risks,” says Anthony Shaw, a geography professor and a fellow of the Cool Climate Oenology and Viticulture Institute (CCOVI) at Brock University. Ontario currently has three wine-producing regions: Niagara Peninsula, Lake Erie North Shore, and Prince Edward County. With other cool-climate areas emerging, like Grey County near the Georgian Bay, “we’ll see a greater diversity of grape variety and wine style,” he predicts. Ontario is currently known for its whites like riesling and chardonnay, which do better in cool-climate weather. But it could start to see more consistent maturity of warm-weather reds like cabernet sauvignon, Shaw says, and a better crop of newly introduced varieties, like shiraz. (The Lake Erie North Shore region, which is relatively warm, already has great reds like cabernet sauvignon and merlot.) In Prince Edward County and Quebec, where growers must often bury their vines to protect them from frigid temperatures, milder winters and a longer growing season will be good news. Extreme heat is already a concern in B.C.’s Okanagan Valley, but with drip-irrigation technology, similar to what’s used in California and Australia, wine growers should be able to mitigate the risks. Canada’s famous ice wine shouldn’t be affected as long as we continue to see winter days that reach at least -8° C (the highest temperature at which these grapes can be harvested), but the harvest could be pushed back later in the season. “Of course, we don’t want to see dramatic changes in climate for Canada,” Shaw emphasizes. But slightly warmer temperatures, for the wine industry, will be a boon.

The science of wine pairing

Now that classic Quebecois poutine is popping up on upscale restaurant menus, it’s not uncommon to enjoy it with a glass of wine. To set off this dish, Toronto sommelier Erin Henderson recommends “sparkling, or a high-acid white to cut through the fat and keep the palate fresh,” citing Cave Spring chenin blanc or Trius brut, both from Ontario, as good examples. Researchers are unravelling the science behind what sommeliers like Henderson, who co-owns the Wine Sisters, know to be true—that astringent wine pairs well with rich food.

Our mouths are naturally lubricated with saliva, explains Paul Breslin of Rutgers University, who published a study in October 2012 on mouth feel. When eating a cheese­steak and fries, for example, the mouth becomes overloaded with grease. “We want the mouth to be just right, for saliva to do the job it evolved to do.” That explains why people reach for a beverage that feels coarse or dry on the tongue—a fizzy Coke instead of water—to cut the grease. It happens in cultures around the world: pink ginger with sushi; coffee with eggs and bacon; pop with pizza. Or dry white wine with what Henderson calls “fat, carbs and … more fat,” a plate of poutine.

About 17 years ago, Andrew Reynolds, a researcher at Brock University’s CCOVI, learned about soy and potato farmers who put a GPS on their tractors, and used that information—combined with data from a yield monitor—to make detailed maps of the field, highlighting which areas were producing the most. “I thought, this would be a great tool to apply to grapes. I wonder if we can use this to understand terroir,” he says.

The word terroir refers to everything from the location of the vineyard, to vine moisture, to human-controlled factors like irrigation, Reynolds notes. As his maps show, many microclimates can exist within the same vineyard, affecting the taste of the grape. “We did a cabernet franc trial with sites all over the Niagara Peninsula,” he says. “Vineyards closest to the lake tended to be more vegetal: think jalapeno pepper, canned green bean. At the warmer sites, there was a lot of cassis and red berry [taste].” By using his detailed maps as a guide, he helps winemakers tailor their crop to the exact specification of their vineyard—and to tiny variations within it.

Can you trust that wine review?

To the casual drinker, wine reviews can seem overly baroque. If you aren’t able to pinpoint notes of tobacco or mown grass in a glass of cabernet franc, though, you’re probably in good company—just 25 per cent of the population belong to a group called “supertasters,” who have more taste buds than the rest of us. And according to research from Gary Pickering at Brock University, wine professionals—including wine writers—most often fall into the supertaster category.

Pickering has done two studies of supertasters and is currently finishing a third. “I wondered to what extent winemakers, wine writers and [other] wine professionals may differ from the average consumer, in terms of the likelihood of being a supertaster,” he says. After recruiting 330 subjects in Ontario, he gave them a chemical compound that supertasters experience as very bitter; others barely react to it at all. The finding: one’s level of wine expertise “does predict how likely it is that you’re a supertaster,” he says. “Do wine reviews really reflect the views of average people?” Not always, it seems—suggesting a non-supertaster might enjoy a $7 bottle of red as much as a pricier choice.