An aspiring cowboy who played guitar and drove a pickup truck, his ultimate dream was to be a rodeo champion 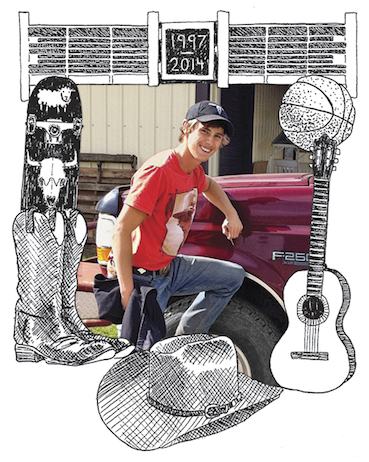 Benjamin Forrest Steiger was born in Calgary on Dec. 5, 1997, the son of Wayne Steiger, a large-animal veterinarian, and Kathy Sardi (now Groenen). The youngest of three brothers, “Benny” was very much the baby of the family. His eldest brother, Chalmer, was 25 when he was born; Chase, the middle boy, was already in high school. “Ben was always mature, even at a young age,” Chalmer says. “He grew up real fast.” (Six months after Ben arrived, Chalmer’s daughter—Ben’s niece—was born. “They would go to gatherings and she would introduce him as her uncle,” Chalmer recalls. “Everybody would get a kick out of that.”)

Benny spent his early years at the family ranch in Turner Valley, Alta., 30 minutes southwest of Calgary, where his parents operated a veterinary clinic (his dad the doctor, his mom the manager). It was a childhood surrounded by saddles and steers. “We’ve got photos of him as a baby, in my arms, on a horse,” Wayne says. “His first ride was on a sheep when he was three.” Ben got a pony of his own when he was five; by 12, he was roping and riding calves. “All he wanted to do was be a cowboy,” his father says. “It was his passion.”

A fit, natural athlete—with a giant grin and a mop of curly hair—Ben was a quietly fierce competitor who wanted to excel at everything he tried, from skiing to skateboarding to dirt bike racing. The first time he strapped on a snowboard, his dad asked if he wanted a lesson first. “No thanks,” he replied. “I read a book about it.” Ben taught himself to play guitar, too. One of his biggest heroes was Chris LeDoux, the American bronco rider who, famously, financed his rodeo career by recording and selling his own country music albums. Ben had similar dreams.

When his parents separated, Ben lived with his mom in Calgary during the week and at the ranch on weekends. In many ways, he was a typical teenager, a free-spirited kid who drove around with pals and recorded goofy cellphone videos. (In one clip, Ben is wearing his junior varsity basketball uniform and lip synching Journey’s Don’t Stop Believin’.) For a 15-year-old, however, he understood the meaning of hard work. Last summer, when floodwaters devastated the nearby town of High River, Ben took a job with a plumbing company and spent weeks slogging through people’s basements. His goal was to save enough money to purchase his own pickup truck—as soon as he was old enough to drive.

That summer, as Grade 10 approached, Ben moved back to Turner Valley and transferred to Oilfields High School. On weekends, he worked at the Highwood Auction Mart, chasing cattle and pocketing more cash for his truck. On Dec. 5, his 16th birthday, Ben earned his driver’s licence; he bought his red pickup the very next day, a 1996 Ford F-250. By then, it was rare to see Benny without a cowboy hat on his head and a pack of chew in his pocket (right beside the Pop Tarts, his favourite snack).

Although Ben had learned to ride bulls, he was determined to master the most difﬁcult rodeo discipline: saddle broncos. “He loved the adrenalin and the excitement,” his dad says. “He knew the saddle bronc was going to be the hardest to learn, but it’s also the easiest on the body.” Not surprisingly, Ben’s parents did worry about his safety, but he was a determined, conﬁdent young man. “I’m not doing it for you,” he often said. “I’m doing it for me.”

On April 5, Ben was in Thorsby, 350 km from home, participating in a junior training course run by the John Duffy Bucking School. The small crowd, about 80 people, included Ben’s dad. “Every time he got on a bronc, he would look up at me and twirl his finger in the air if he was happy,” Wayne says. “I would twirl my finger back, he would nod his head, and out they’d go.”

It was almost 4:45 p.m. when Ben climbed onto his first saddle of the day. For five seconds, it was a standard ride, the young cowboy focused and composed. But after the bronco tossed him to the dirt, one of its powerful hoofs clipped the back of Ben’s neck—a “freak” blow, as witnesses later said. Amazingly, Ben managed to stand up and take a few steps before falling back down, his neck broken. “I spent 30 minutes trying to get him going,” says Wayne, who sprinted to his son’s side to administer CPR. “He just didn’t have a chance.”

After he died, Ben’s family discovered a song he had recorded on his iPad. He called it One of a Kind. “That’s what he was,” his father says. “One of a kind.”