Beyond the pale: Living with albinism in Africa 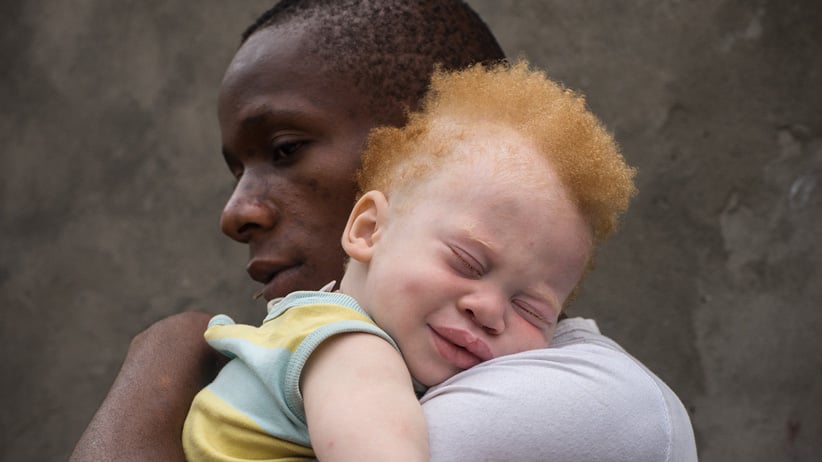 On Boxing Day 2010, Emily Urquhart delivered a baby girl, the fairest of them all, in a hospital in St. John’s, N.L. With her ethereal shock of white hair, Sadie entranced and worried her mother from the beginning—and Urquhart and her husband, Andrew, were not alone. Nurses came from all over the hospital just to look, while another new mom exclaimed, “Your baby looks like an angel,” and, in the years to come, after the diagnosis was made—Sadie has albinism, a genetic disorder marked by an absence of pigment in skin, hair and eyes—people are randomly drawn to the child, and quick to express admiration, sympathy or family stories. Albinism is relatively rare—perhaps one in 20,000 births overall—but worldwide in occurrence. As Urquhart, a folklorist by profession, demonstrates in Beyond the Pale—an extraordinary mix of memoir and manifesto—in ways large and small, it runs in the family.

Even in northern latitudes, where they more easily fade into the background, people with albinism still capture wonder and attention; in tropical zones, where humanity is typically darker-skinned, they have always inspired stronger reactions. “In North America, we have legends of albino colonies in backwoods places,” says Urquhart in an interview, “but in the San Blas islands off Panama, where the Kuna people actually do have a high incidence of albinism, their beliefs are more positive, and people with albinism can be quite revered.” But familiarity does not always bring reverence or even acceptance.

In East Africa, the high incidence—one birth in 1,400 or perhaps even higher—has sparked what Urquhart, struggling for a neutral description, calls “strong cultural beliefs” about it, most of them harshly negative and frequently exploitive. There, people with albinism have been, and still are, subject to infanticide, ostracism, violence and murder because of it. More gruesomely, they have been dismembered—while alive or after death, their graves dug up and corpses hacked to bits—because of the conviction that their body parts, used in rituals and potions, transmit magical powers and protection to those who consume them.

Peter Ash, the Canadian with albinism who founded Under the Same Sun, a non-profit aiming to improve the lives of people with albinism in Tanzania, issued a report a year ago listing 129 recent killings and 181 other attacks—including mutilation and the violation of graves—in 23 African nations. Most of the victims are young, Urquhart reports, because they’re easier to attack and because—as in the sex trade—younger flesh is always more valuable. Earlier this month, Tanzanian police announced the arrest of 32 “witch doctors” implicated in the murder of 75 people with albinism since 2000.

Life in Africa for people with albinism is hard enough at the best of times. Half of them, according to some estimates, develop skin cancer by 20 and 80 per cent by 30. “That’s for a number of reasons,” Urquhart says. Not only is Tanzania close to the equator, where the UV levels—which, long ago, drove the evolution of dark skin—are high, “African life is very often lived outside, and access to expensive sunblock is pretty rare.” Skin cancer and the threatening sun are worries in the north, as well. Even in Victoria, where Urquhart’s family now lives, Sadie is never without a hat and wears sunscreen daily, winter included.

The personal, unsurprisingly, is never far from the political in Beyond the Pale. Almost every outsider deeply concerned with the plight of Africans with albinism has some personal connection to the disorder. And so Emily and Andrew thought long and hard about taking Sadie with them on their visit to Africa, because the child was the living link: “Without my child, how will people know who I am?” writes Urquhart. In the end, the child did not go. “Part of the initial reason to take her then was that she wouldn’t understand what she was seeing.” That window has since closed, her mother continues. Sadie can’t visit Africa until she’s much older because now, she would “connect that terrifying reality—children who share her genetic condition being murdered, dismembered and sold on a black market—to herself.”

Another personal reality, not terrifying, but urgent to Urquhart, was to find the ancestral genetic link. The discovery by Emily’s parents—novelist Jane Urquhart and painter Tony Urquhart—of a turn-of-the-20th-century photo of her father’s family, which seemed to show a young women with white hair, sent Emily Urquhart in pursuit of her family history. She eventually learned that her great-great-aunt had five daughters, four of them with albinism. “I was nervous, initially, because I thought maybe I would find out something really horrible.” (The sisters, incidentally, tied the current Guinness record for most siblings with albinism—“I was surprised to find that actually existed,” says Urquhart dryly.)

What worried her was the possibility she had never before heard about the women, because “their pictures had been turned to the wall, or, much worse, they had been institutionalized. There were horrifying stories that I could have discovered, which would attach to my story, and I would be unhappy for having found them.”

It didn’t turn out that way. The women led blessedly unremarkable lives, with jobs, husbands and children, in Niagara Falls, Ont., of all places. “Actually, one did have a remarkable life; she was one of the first chiropractors in the country, and practised well into her 80s.” Aunt Ora even drove a car, still rare today for people with albinism, whose vision is usually extremely poor. For Urquhart, it was a very good ending for one of the most emotional stages on the roller coaster launched by Sadie’s birth. But it didn’t approach the soul-searching induced by the second-child question.

The possibilities and ethics born of modern genetic science are fraught for parents of children with genetic disorders. The math of albinism is simple: Urquhart and her husband each carried the recessive gene needed to produce a baby with Sadie’s genetic makeup. Any child of theirs has a one-in-four chance of having albinism, a one-in-two chance of carrying the recessive gene, and another one-in-four chance of being clear of both the gene and the condition. The current tendency is for the parents to use in vitro fertilization to test their embryos for the gene.

But what then? The unspoken assumption is that the eggs that would lead to albinism would be discarded, and subsequent children would not have albinism (or whatever the condition in question). Yet there are parents who want to select for that disorder, to provide a similar sibling for the child they already have. Parents, as Urquhart says, “can be vilified for either decision.”

In January, Emily Urquhart delivered her second child, son Rory. She and Andrew had simply rolled the genetic dice. Rory has the gene, but not albinism. His sister adores him all the same.