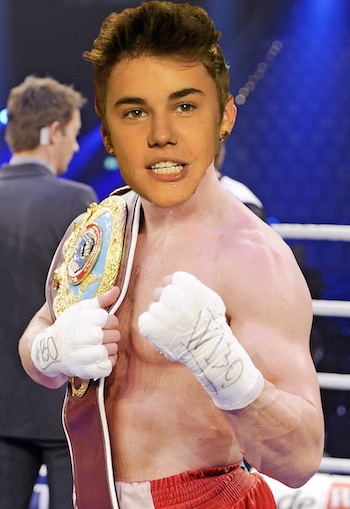 It looks like all of Justin Bieber’s rough housing with Mike Tyson and friends has finally paid off. The Stratford, Ont.-born teen heartthrob turned lesbian icon is now a suspect in a “misdemeanor battery” case in Calabasis, California, where he currently lives. Bieber and longtime celibacy sponsor Selena Gomez, the story goes, were leaving a local shopping mall on Sunday afternoon, when a paparazzo tried to take J.B.’s photo, allegedly blocking the pop star’s car in the process.

According to said paparazzo, a scuffle ensued, one Bieber apparently won–because the next thing the paparazzo knew, JB had driven off, leaving him with a very convenient tummy ache. (Onlookers say a lawyer who happened to witness the altercation immediately approached the paparazzo and suggested he call an ambulance and file a police report–likely with an eye to a possibly lucrative lawsuit.) The police arrived shortly after. According to TMZ, “the photog complained of pain in his upper torso, an ambulance was summoned and he was taken to a local hospital where he was examined and released a short time later”.

As for Biebs himself, I can’t say I feel sorry for him, what with the never ending supply of money, fans (he is said to gain a Twitter follower every other second) and outlandish gifts from big sister Ellen Degeneres. But this video does make me feel even less sorry for the paparazzi than Bieber himself.