He made unlikely friends, and built his own sauna. Carefree and endearing, he grew up but never grew old. 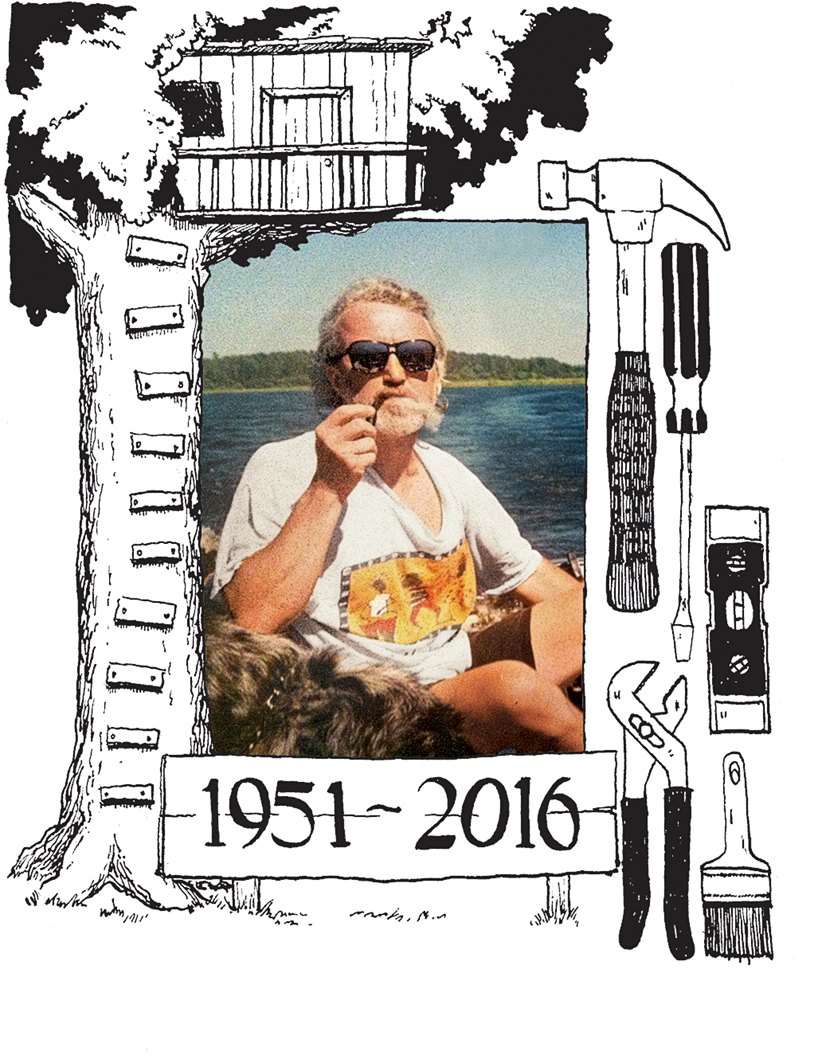 Brian Charles Patrick Renaud was born on July 19, 1951, in Fort Frances, Ont., to Beverley, a waitress, and Charles, a lighting technician, who left the family when Brian was five. Brian was the older brother to Chris, Kimm and Barb, and he shared a bed with Chris (“Wiss”), often holding his hand as they fell asleep.

Brian was a classic little boy. During summers at his grandparents’ cottage, which was named “Linger Longer,” Brian erected tree forts and camped. At eight, he found an arrowhead, used his toy bow to shoot Kimm between the eyes, then later proclaimed himself a surgeon and removed Kimm’s stitches himself. He tried glazing honey on the face of a neighbouring boy to attract bees, and when Brian and Chris got matching BB guns, Brian painted Chris’s gun baby blue to tell them apart. “It became a family threat,” says Beverley. “ ‘Be nice or I’ll paint your things blue.’ ”

Brian ate like a growing boy. At 13, after the family moved to Winnipeg for Beverley’s work, Brian began hunting and ﬁshing and barbecuing what he caught. He ate steak with a side of pork chops, and he mastered baked beans.

He never grew out of mischief. At 18, when he learned that a nearby hatchery was about to gas its birds, Brian snuck away with two geese and eight chickens and planned to drive them to British Columbia with Barb and resettle them at their grandmother’s cottage. When the vehicle broke down on someone’s lawn, Barb recalls, “the guy said, ‘If you don’t get that car off my lawn, I’m phoning the police.’ ” After Brian convinced the homeowner to buy the car for $75, he and Barb boarded a Greyhound bus, which permitted the fowl to travel in boxes, and completed the cottage migration.

After high school, Brian started a cleaning business and drove a beat-up hearse instead of a truck. Although he studied for one year at Mount Royal University in Calgary, he quit to become an incredibly creative handyman, in one instance fixing his mother’s ice machine with a sliver from the shell of a bullet.

After he met his wife, Maureen, and had two daughters, Ceiligh and Carlin, Maureen often came home to find Brian and the kids had turned the house into a fort. After he and Maureen got divorced, he would serve his daughters each a half box of Lucky Charms with whole milk for breakfast. “To make it delicious, he would put whipping cream on top,” adds Carlin.

Brian trusted everyone. When Ceileigh forgot to bring her instrument to band camp, he arranged for a truck driver to make a stop to deliver the 12-year-old her clarinet. Brian befriended everyone, too, including one man named Rosco, who he met while playing harmonica at a blues club. When Brian volunteered to help his daughter collect bottles for Girl Guides, he invited Rosco, who had a beard down to his bellybutton. “We kept getting calls that these two weirdos were taking the bottles we left out for the Girl Guides,” says Carlin.

When Ceiligh got breast cancer in her twenties, he got her a puppy (and one for himself), and joined a gym when she needed a partner. He spent nearly every day with Ceileigh until, less than two weeks after her wedding, she passed away. “He never fully recovered,” says Carlin. Despite his pain, Brian remained himself in many ways, sleeping on the couch with his springer spaniel, travelling to Mexico each year to snorkel and play blues, and driving across town for deals on pork chops.

Around 2000, Brian scavenged for parts and built a sauna in the backyard of his Calgary home. Carlin explains the impulse: “It was, ‘Do you know what would be great? A sauna.’ And then one was built.” Everyday, winter to summer, Brian retreated to his sauna where he listened to blues and lingered as long as he liked. “That’s where he kind of meditated and reflected on life,” says Carlin. “I wonder if that’s one of the only places he would be calm.”

On Saturday, Feb. 2, Brian was in his sauna, with his bags packed for Mexico in the house. Strangely, he didn’t call Beverley on Sunday, nor the following day. On Tuesday, his tenant noticed his dog’s bowl was empty, so she began to search for him. When she couldn’t open the sauna door, she called the paramedics, who found Brian lying up against the door. Beverley says they suspect he had a heart attack. He was 64—but only on paper.