Can we sniff out true love? 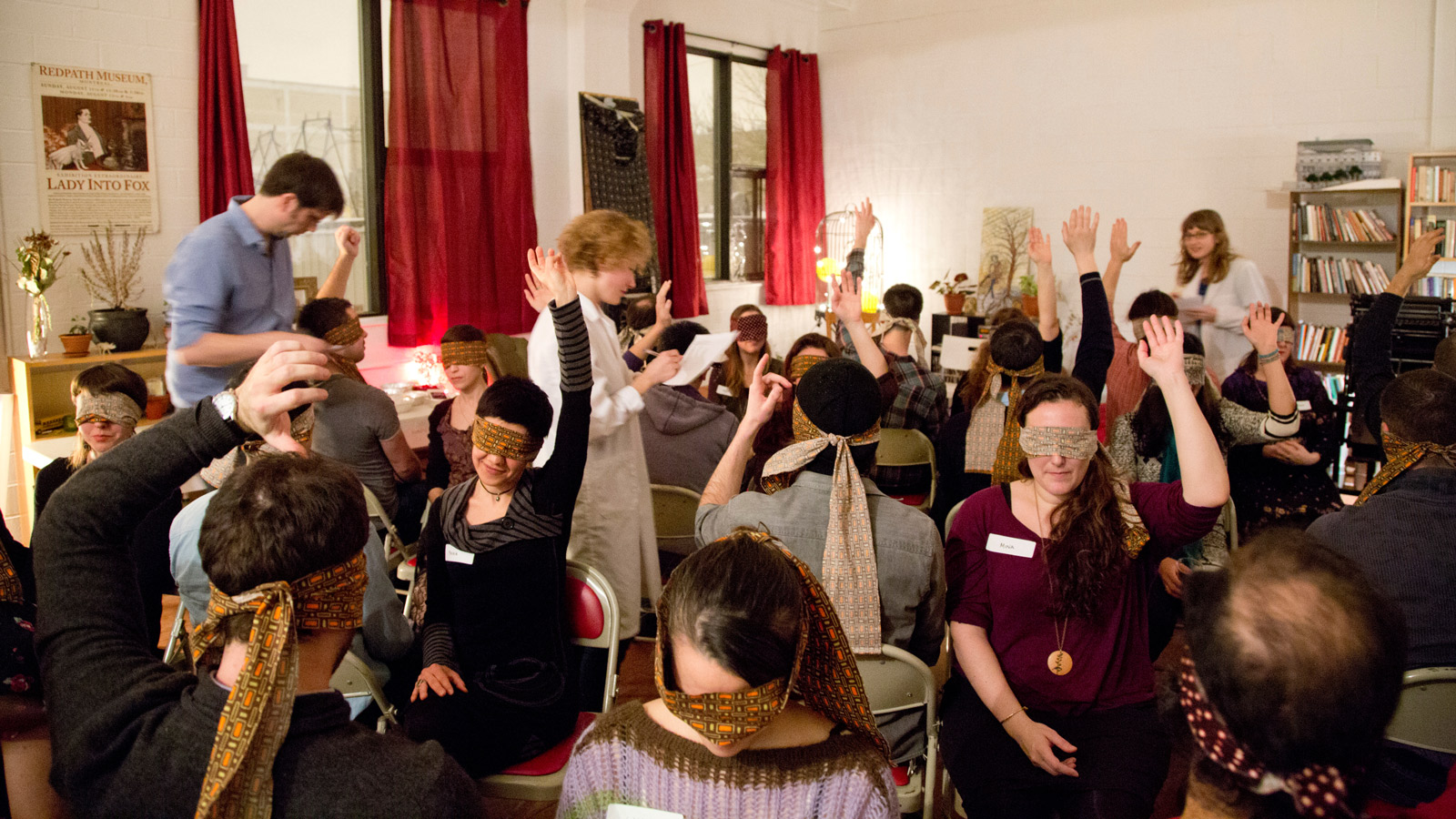 In a traditional biology experiment, the subjects are clueless. If someone in the maze favours left turns, researchers only care if it affects future experiments. They are not concerned with the daily lives of mice. But those daily lives inspired the “Scientists for Love” and their inaugural public experiment in Montreal, “speed-dating for the senses (and the sensitive),” which used sensory deprivation to introduce 14 men and 14 women to each other.

Amy Chartrand and Leigh Kotsilidis, the two Scientists for Love, have backgrounds in poetry (Kotsilidis’s book, Hypotheticals, was published by Coach House Press) and theatre (Chartrand works with the National Theatre School). But they were interested in research on the biological basis for attraction. (Chartrand wrote her master’s thesis on desire, and officiates weddings.) They prepared for their experiment by putting on lab coats and asking people in bars to rate strangers’ voices. “They line up for it,” Chartrand says. The pair began to see potential in experimental constraints.

They recruited participants on Facebook and assembled them at Kotsilidis’s Little Italy loft on a biting night in February. The average participant was single, around 30, and shared their curiosity about the science of attraction. They arrived through separate men’s and women’s doors into the arms of a gang of volunteers in lab coats, who blindfolded them. Conversation spilled out as both groups calmed their nerves. “Is attraction scientific? I wanted to test that out myself,” one woman explained in the women’s holding pen before they began. (Some names have been changed at participants’ request.) Everyone brought a dirty T-shirt, and some comfort food, which was placed on a yellow steel cart. The women’s cart was dominated by goat cheese and chocolate; the men had brought convenience-store junk, with few exceptions. “Who brought the prunes?” someone asked.

The evening was in two parts: sensory experiments, then party. For the first experiment, the blindfolded singles recited the alphabet one by one, voting for the voices they liked before groping toward the person in the next chair. Then came touch. Still blindfolded, men and women stood in two advancing lines and held hands, “keeping it below the wrist,” as asked. Reactions were powerful. “This guy tried to put his fingers in mine. I’m a lady. I don’t do that on the first date,” scoffed one woman.

Then off came the blindfolds, as the T-shirts in Ziploc bags were passed around for a sniff test. Based directly on Claus Wedekind’s criticized but influential 1994 study that suggested we are attracted to partners whose pheromones indicate significantly different immune systems, this was to be one of the more revealing experiments, but it only works if you get stinky, and this was apparently too much for some. Many men and women brought clean shirts. “One had no soul. There was nothing to this shirt,” said one woman.

And then, the darkly familiar situation of judgment at a distance. The group formed two concentric circles, and men and women stared at each other for 15 seconds in turns. Surprisingly, sight was described as the most intense and difficult experiment. Last, they tried each other’s comfort foods, the men sampling, the women eating everything.

While the volunteers crunched numbers, participants broke the ice again, going in search of “that accent” or whoever brought the identical cheese. When the results were taped to a wall around midnight, it was difficult to get the room’s attention. The participants had already taken their own lessons. One woman had picked the same guy five times, but when she went up to him, “I didn’t feel much connection,” she reported. Perhaps they should have put their blindfolds back on. People confronted their sensory choices until 4 a.m.

The event confounds labelling. One might call it a participatory work of art, or a semi-scientific perception experiment, and neither captures its childlike excitement. We rarely encounter others in an unfamiliar way, such as our very first time holding hands, but Scientists for Love suggest this kind of experience remains possible. And powerful: Weeks later, the participants organized a reunion.