Canadian wines: So much to discover

Not long ago, Canadian wine drinkers would have fit in one of three camps: red, white or Baby Duck. Boy, how things have changed 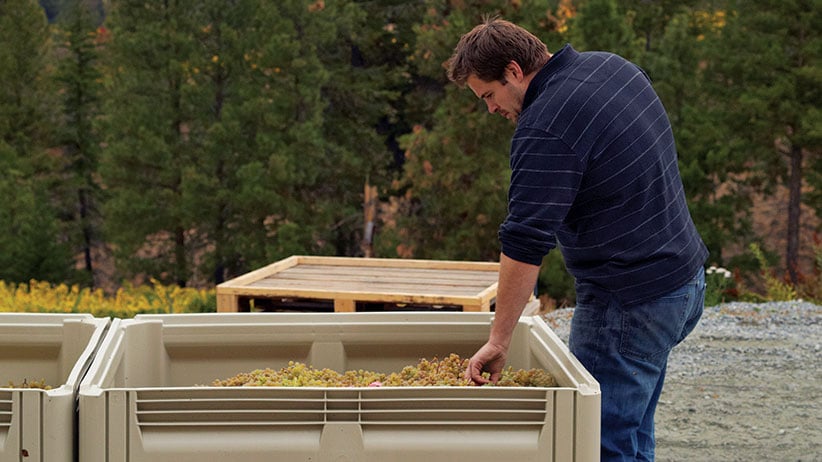 It was billed as the Grape Debate. The issue to be decided on a February night at the Vancouver public library: “Should B.C. have a signature wine varietal?” Argentina has its malbec; New Zealand its sauvignon blanc, but what grape, what wine, should B.C. be known for: Riesling? Chenin blanc? Pinot noir? Syrah? Or why specialize at all in a province of diverse microclimates, soils and geography, the so-called terroir that makes a wine distinctive? Isn’t variety the spice of life? An expert panel was assembled. A vote would be held and fermented refreshments served. Tickets sold out in short order.

Not so many decades ago in this province, and this country, your typical wine consumers would have cleaved into three possible camps: red, white or Baby Duck. Those were simpler times in the wine business, but certainly not better ones. Wine was made from whatever disease-resistant grapes were deemed tough enough to survive Canadian winters: labrusca table grapes such as Niagara and Concord (better suited for making jelly) were Ontario staples, and in B.C., the widely planted Okanagan riesling doomed generations of B.C. whites to mediocrity. Reviewers sampling the wines made of labrusca grapes coined the term “foxy” for the distinctive aftertaste, if they were being charitable. “Skunky” if they were not.

It was a comfy, closed shop for most wine growers and winemakers. Ontario squeezed out about 90 per cent of the domestic wine production with B.C. cranking out the rest. The industry snoozed behind tariff walls on imported grapes and wines, and enjoyed guaranteed shelf space at provincial liquor-control boards. Trouble was, Canadians were moving on. They were more widely travelled and sophisticated. Generations of postwar European immigrants knew foxes, skunks or ducklings had no place in a wine glass; quality restaurants wouldn’t dream of fouling their wine list with domestic product. By the mid-1980s, it was clear tariffs would tumble as negotiations progressed for a Canada-U.S. free trade deal, as well as under GATT, which might well have stood for God-awful terrible tipple but is actually the General Agreement on Tariffs and Trade. Governments in Ontario and B.C. subsidized growers to yank out low-quality vines, which left thousands of hectares fallow. It was generally conceded that free trade was the death knell for much of an uncompetitive industry. A mercy killing, really.

Except … break out the crystal, cue the violins, pop the corks … from near death came resurrection. Pulling out hundreds of hectares of vines “totally saved the industry,” says veteran B.C. wine writer and author John Schreiner. The money changers were driven from the vineyards to be replaced by true believers, who had faith that, with the right European vinifera vines planted in the right place, magic could be made. All it needed was time, talent, much money and a few mild winters, please, to get things rooted (or an autumn freeze in the case of ice wine). And magic it is. It remains an ongoing, uneven but inspiring voyage from plonk to “bottled poetry,” as Robert Louis Stevenson once said of the best vintages. Canadian consumers have elevated their tastes, as producers have raised their game.

Canadians now drink 15 litres of wine per capita every year, a nearly 15 per cent increase in five years, says a survey commissioned by Vinexpo, a global trade exposition. While that’s modest compared to the 50 litres per person consumed in Italy, France or Spain, the growth rate is three times the international average. Most of the wine Canadians drink is imported, with Italy and France the top suppliers. Only about one-third of the wines Canadians buy is produced domestically, a decision driven by many factors: quality (in some cases), price, availability (good luck finding a decent selection of wines from other provinces anywhere in this country) and perhaps a tendency to hold a grudge for the sins of Canadian vintages past. That resentment may explain why just three per cent of those 15 litres consists of sparkling wine. Quack, quack.

The good news is the market share of Canadian wine is growing, along with an explosion of new, quality wineries—not only in Ontario, the largest producer, and B.C., which runs second, but also in Quebec and Nova Scotia. One telling measure of untapped domestic potential? According to Vinexpo, 90 per cent of the wine drunk in Canada is consumed in just four provinces: Ontario, Quebec, B.C. and Alberta. Elsewhere, there is much evangelizing to be done. Order wine with dinner in restaurants in small-town Atlantic Canada or the Prairies, and the choice is too often box red or box white. This too shall pass.

Canadian wines are gaining attention and respect internationally as wine critics set aside their prejudices in favour of a good underdog story. American wine critic and Wine Spectator columnist Matt Kramer called Ontario “the world’s least-known great wine zone.” He lavished praise on the Niagara Peninsula’s cool-climate chardonnays, “as well as some superb gamay noir, cabernet franc and very promising pinot noir.” A return visit took him east of the Niagara Peninsula to Ontario’s Prince Edward County, where the alkaline limestone soil of this tiny region is producing spectacular chardonnay, despite a climate so cold that grape growers frequently bury their vines under soil during the winter to keep them from freezing.

Jancis Robinson, the renowned English wine critic and author, has chronicled the steady improvement in Canadian wines. “Overall, there were more impressive whites than reds but—presumably thanks to climate change—reds are no longer pale apologies for wine, even in Ontario, where summers tend to be cooler than in British Columbia,” she wrote this January in London’s Financial Times after sampling 50 Canadian wines. The Nova Scotia riesling compared favourably with English cool-climate whites. While Quebec was deemed too cold for most European vines, she was impressed with a 2008 oaked dry white from Domaine Les Brome made from the hybrid vidal grape. In past reviews, she’s found much to praise in Ontario’s whites. And, like Kramer, she gushes over Prince Edward County’s chardonnay. “The best of these wines have real delicacy, as well as density of flavour.”

In Robinson’s latest tasting, however, her highest praise went to Okanagan’s offerings, both whites like chardonnay and dry riesling, and especially the “strapping” reds from the semi-desert of the South Okanagan. Okanagan wines, she’s written, “almost punch you between the eyes with their frankness.”

The problem is, few people outside Ontario and B.C. have the opportunity to get smacked with the fruits of the Canadian winemakers’ labour. Canada has just 11,000 hectares of wine vineyards, compared to more than 34,000 in New Zealand, which has a population slightly smaller than B.C. and a ripping good export business—the 11th highest by volume in the world. Of course, New Zealand has more sheep than people, veteran B.C. winemaker Howard Soon of Sandhill Wines caustically noted during the Vancouver debate. “If they get the sheep to drink wine, New Zealand’s got it made, domestically,” he said. “They have to export because they have few people and lots of friggin’ wine.”

To the puzzlement of critics, vintners in Canada, in the main, are less inclined to export their best, save for ice wines. Total wine exports were a middling $28 million in 2010, and $12 million of that was ice wine. And with global warming making the seasons less predictable, it’s unclear if ice-wine production can continue at the same rate. Is it false modesty or lack of savvy or ambition keeping the best wines at home? Kramer asked after his recent Ontario visit. Some could place among the world’s great wines, he wrote, “but they can’t achieve that recognition as long as they remain exclusively local.”

Which brings us back to the rollicking Grape Debate: how best to get noticed on the world stage? While the main focus was on B.C.—a relatively small player, with 4,000 hectares of vineyards producing one million cases of wine made with local grapes a year—the arguments apply to the micro-markets of Quebec and Nova Scotia, and to Ontario, which is achieving a critical mass of exportable wine. For Sid Cross, a wine writer and adviser who favours specialization, it’s time to dispense with varieties that have marginal success even in a varied climate like B.C.’s. Stop cranking out sauvignon blanc and slow-ripening cabernet sauvignon; perhaps leave chardonnay to Prince Edward County. Flaunt syrah in the hot south and riesling, chenin blanc and pinot noir in the cooler north. “We’ve been pissing around for 40 years,” agreed wine critic Anthony Gismondi. “Without a couple of wines to hang our hat on, to get people noticing us, we won’t be any more than beaches and peaches.”

Others, such as David Scholefield, a wine judge and partner in the Okanagan Crush Pad co-operative, say the grape is secondary to drawing out the character of the terroir. Great wines in Burgundy, for example, are identified not by the grape but by the region. In that regard, Canada is a tough market to generalize, having both vibrant, cool-climate whites and plenty of summer heat and growing time in Ontario, as well as robust, complex reds in the arid rain shadow of the South Okanagan.

After sampling a prodigious variety of wines, the mellowed audience at the debate voted against championing a single grape variety. Naming a provincial or a Canadian wine, it seems, is like defining our national cuisine: impossibly limiting and perhaps unnecessary. The most heartening part of the night was a consensus that our wines haven’t hit their potential. They’re never satisfied, this new breed of growers and winemakers—the characters, dreamers, science geeks and magicians who’ve lifted Canadian wines so far, and so fast.

This can only be good for us, the consumers, who like to think we’ve grown along with them—and bottled a few memories along the way.  For some, it’s the first cork we popped, not usually for the quality of that early-budget bottle but for the experience that surrounded it. Or we recall wines that rocked our senses, and the meals that went with them. We may not have a wine critic’s vocabulary to capture the aromas or to describe their complexity, balance or the slow reveal of hidden depths. But we know the moments to savour and share, for the best ingredient in a glass of wine is often the person across the table.
There will certainly be disappointments. But every new bottle is a fresh start, an act of optimism, the quest for the perfect expression of “sunshine, held together by water,” as so beautifully put by that all-around genius and good Italian boy, Galileo Galilei.

You can circle the world in this search, but there is much to discover and appreciate on the store shelves and back roads, and in the vineyards and tasting rooms here in Canada. May these pages help guide your journey.