Care for a tall, cool glass of spruce beer? 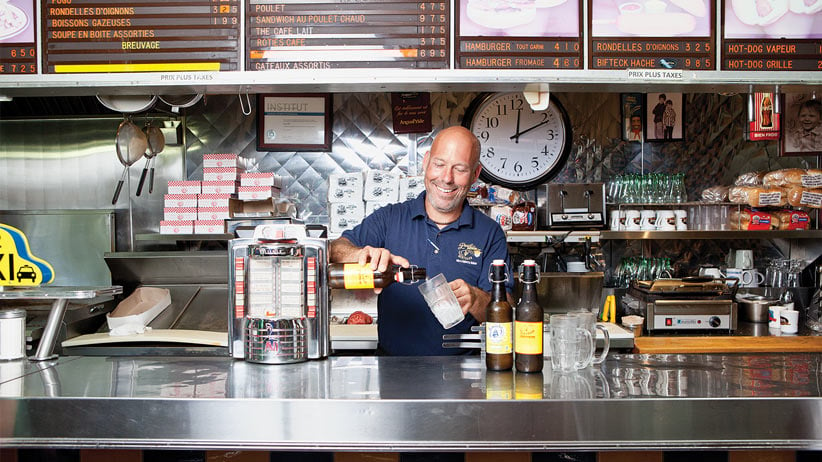 Spruce ice cream, spruce syrup and spruce-tip salads have been hot culinary items the past few years, but creating tasty treats with the needles of this northern evergreen is far from a new notion. Spruce-beer soda has been a favourite among French-Canadians for decades. Its popularity has wavered over the years, but people are once again clamouring for the sweet, earthy drink.

First Nations and early settlers of Quebec brewed vitamin-C-filled spruce beer prior to the 1700s to combat kidney illnesses, stomach upset and scurvy. It was considered a poor man’s drink until Swedish explorer Pehr Kalm brought news to Europe that the strange recipe was indeed making people healthier.

Some craft breweries in eastern Canada recently began brewing spruce beer with hops and molasses. But the way most Quebecers know it is in the form of alcohol-free soda, which tastes something like Sprite mixed with Christmas tree. However, while mass-produced brands are on offer, today there is only one producer of the exclusive drink that brews the soda in the old-fashioned way. Dany Roy is the owner of Paul Patates, a poutine shop in Montreal, the only place left to taste the “real McCoy,” he says. It’s brewed in-house using a simple recipe of water, sugar, yeast and spruce oil. (The exact recipe is a secret.)

From the 1940s to the 1960s, many Quebecers brewed spruce beer at home. “They used to make it in the bathtub, because you need a big container. They washed them [first], of course,” laughs Roy. They would then bring the bottles up to the roof to ferment in the sun, only knowing they were ready to drink when the bottle-tops popped off.

RELATED: How to make natural soda

Unlike the pop available in stores today, which is made bubbly using carbon dioxide gas, traditional sodas are made using yeast, and left to sit in a glass bottle, where carbonation naturally occurs over time. Roy uses this method each day, once he closes his restaurant, where he brews the spruce beer in solitude, making up to 750 bottles in an hour.

The original soda recipe comes from the Émile Bertrand restaurant, which opened in 1896. Montreal native Stephen Morrissey remembers going in the early 1950s with his father. “Spruce beer is part of the Montreal experience, but it’s an acquired taste. I wouldn’t come just for that; you’d be disappointed,” he jokes.

Ten years ago, the Émile Bertrand restaurant closed its doors after owner Barry Fleischer lost his wife and business partner, Barbara. Fleischer went to work for Roy and passed down the recipe.

Paul Patates now offers two variations of the drink. The original recipe, the Bertrand, is only sold in the diner, because it needs constant refrigeration so it doesn’t become bitter. The Émile is a slightly sweeter, more bubbly version that’s 70 per cent natural and 30 per cent artificial, so it can be sold wholesale to other restaurants and stores.

Some mainstream companies such as Compliments and President’s Choice sell spruce-beer soda in Quebec, but critics say these versions are too sweet. “Real spruce-beer drinkers really want to have the taste of the Bertrand,” says Roy, and they come from all over Canada and the United States to get it. In 2013, Roy recalls, a man from Newfoundland, who was dying from cancer, wanted to taste the traditional drink one more time and contacted him. Roy packed bottles in a cold container and sent them to the island.

Despite its appeal, spruce beer has had its ups and downs in the province. The Marco brand was most popular in the 1980s, until it was discovered the pop mistakenly contained nearly as much alcohol as a light beer. The uproar among parents who had been allowing their children to drink it caused the company to go under, before new owners brought it back in the late 1990s.

Crush used to make a version of spruce-beer soda, but stopped production 15 years ago. On a Facebook page dedicated to Crush flavours, users still actively hunt for old bottles of the beverage. For those who can’t make it to Quebec, there’s always eBay—at least one seller is offering cases of store-brand Spruce Beer Soda, whose regular retail price is $5—for US$11 plus US$21 shipping, and has already unloaded close to 45 cases.