A break from the outbreak: Music from the Titanic fills an empty toilet paper aisle

Plus: A gin distiller cooks up hand sanitizer; suburban aerobics at the recommended social distance 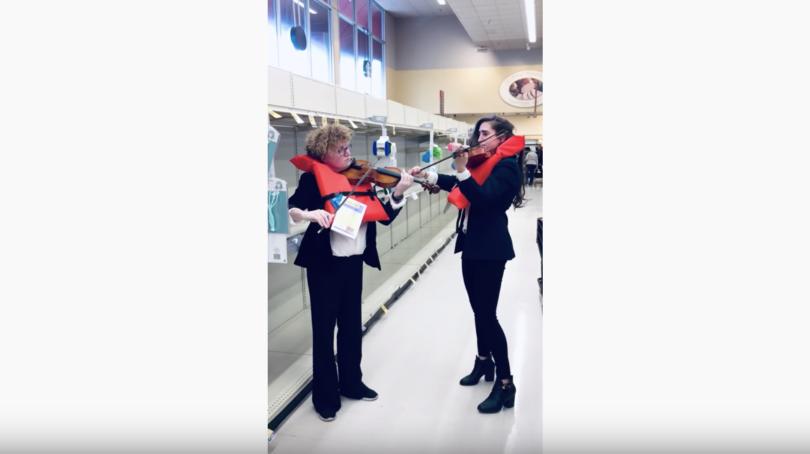 Violinists play 'Nearer, My God, to Thee,' the hymn played on the deck of the Titanic, in a moment of pungent humour (Bonnie von Duyke/YouTube)

In these difficult times, here’s a reminder that good, amusing and pleasingly weird things are still happening in the world.

All hands on deck. In the U.S., two women donned lifejackets and tuxedos to play the 19th-century hymn Nearer My God to Thee, best known as the sad violin song reportedly played on the deck of the sinking Titanic, against the backdrop of an empty toilet paper aisle in a public supermarket. The whole world, the musicians said, began feeling like a sinking ship, and they thought it would be a funny … prank? Two-person flash mob? Viral video? It’s sort of all of the above. “It’s kind of a scary time, and we just wanted to bring some comedic relief to that,” said Emer Kinsella, one of the musicians.

Distilling joy. While your local pharmacy is probably sold out of Purell, one Canadian has taken the problem into his own, well-scrubbed hands. In Beamsville, Ont., Geoff Dillon, who runs Dillon’s Small Batch Distillers, transformed his alcohol distillery into a hand-sanitizer factory, using store-bought aloe to make and deliver 3,000 bottles to local police officers, health-care workers and paramedics. Business has been good—maybe too good. “We’re a little scared because demand’s been high,” he told CBC News.

Redefining the street party. Not everyone agrees that social media is the right substitute for a good, old-fashioned gathering. In Colorado, some local women brought out lawn chairs to hang out more or less together, being sure to keep at least six feet apart while presumably not gossiping about their neighbours too loudly. Meanwhile, in Utah, an aerobics class class popped up that spanned multiple backyards, which included a masterful pop playlist: “We found love in a hopeless place.” Yes we did, Rihanna. Yes we did.