A Manitoba farmboy who started his own business and recorded an album under the pseudonym Steel Audrey, he developed a successful tech career 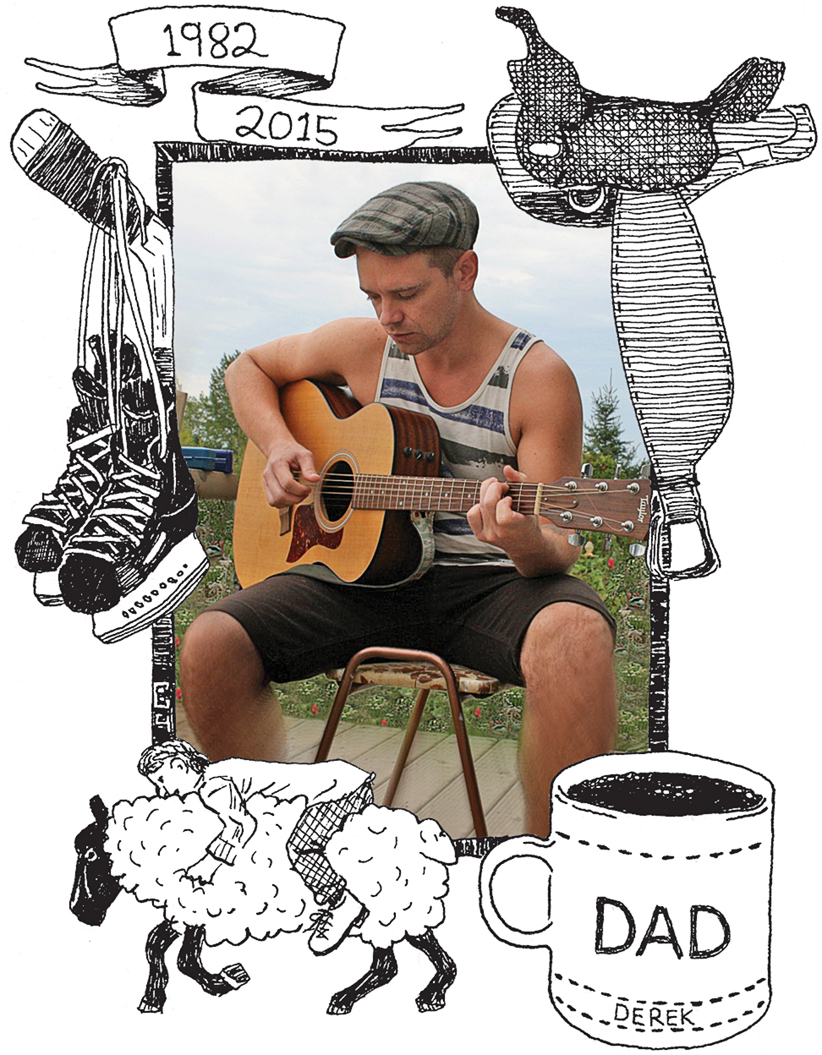 Derek Ryan Kehler was born on Dec. 7, 1982, in Steinbach, Man., to Del and Sharon, who ran a hog farm in the nearby town of Grunthal. Two years later, the family added a girl, Mandy.

The two siblings played constantly together, be it floor hockey, Lego, or even Barbie—that is, until Mandy banned Derek after the dolls’ legs fell off after too many karate kicks.

Growing up on the farm, Derek also spent plenty of time outdoors, riding the sheep as a youngster before eventually learning to ride horseback alongside his dad. Derek also developed a taste for coffee at a young age. Every morning, before Del headed out the door for work, he’d leave a tiny bit in the bottom of his mug. “When Derek would get up, he would always go look at his dad’s cup of coffee, and there was one little sip left for him,” Sharon says.

In a family of music lovers, Derek started guitar lessons at the age of 10. At ﬁrst, he learned classical songs, but when he didn’t progress fast enough, his parents found a new instructor to teach him rhythm guitar. “Half the time, his instructor would go over hockey stats,” Sharon says. But when they tried to pull him out of lessons—thinking he didn’t enjoy it—Derek insisted he wanted to keep playing.

If the kids wanted to enrol in extracurricular activities, they had to do chores at the farm. Derek often worked in the barn so he could play hockey, football or do motocross racing.

In high school, Derek was rarely spotted without a guitar. While his father played country music around the house, Derek gravitated toward rock and heavy metal in his teens, later transitioning to folk music. He and his sister even wrote playful songs about their hometown of Grunthal. A small religious community with a population of about 1,000, “basically, there are more churches than there are people,” Mandy says. So they jokingly wrote a song about how there were “seven churches and room for one more.”

Derek was also one to try to get a rise out of his family. He grew his hair into dreadlocks and would dye them in multiple colours. “Anything he knew his mother wouldn’t care for,” Del laughs.

After graduation, Derek started working in construction, but fractured his neck in a serious car accident. During his recovery, he moved in with Joel Armstrong, and the two quickly became best friends. “We turned our entire house into a big computer network and played video games after work,” Joel says. Derek returned to work on the family farm, saving up money to buy an engagement ring for his girlfriend, Rachele Klippenstein.

They wed in 2004 and moved to Vancouver the following year. Derek landed a barista job at Starbucks before deciding to enrol in the interactive media and web design program at Capilano College in North Vancouver in 2006. He excelled in the program and, after graduating two years later, he co-founded his own business, Orange Peel Media.

While Derek’s career in interactive design took off, he kept up with his country music and never missed the opportunity to perform at a bar in Vancouver’s Granville Island. Derek even found a stage name he finally loved: Steel Audrey. “Steel” because he was learning the steel guitar, and “Audrey” after his grandfather. In 2012, Steel Audrey released a self-titled album.

Life in Vancouver was filled with peaks and valleys. His tech career progressed rapidly, but his marriage suffered. In the summer of 2012, he and Rachele separated. The breakup was especially hard on Derek, so he turned to music. “During his valleys, he wrote all his songs,” Sharon says.

A year later, Derek started a new job with the market research firm Vision Critical. There, he met Helena Curic, who worked in the company’s Australian office. The two immediately hit if off and, in early 2014, Derek moved to Australia to work remotely. When his employer wanted him back in Vancouver, Derek declined, opting to stay in Sydney with Helena. He quickly found a job with a digital development company, where his Australian colleagues christened him “cowboy.”

On Sunday, June 7, Derek and Helena were camping in Sydney’s Blue Mountains. Being wintertime in Australia, a cooking pot of hot coals kept by the bonfire was brought inside their makeshift cabin to stay warm. That night, they died of carbon monoxide poisoning. Helena was 31. Derek was 32.