Don't ask Icelanders how to make their traditional Christmas cake

Ask a Canadian: vinarterta has become a holiday staple in the homes of Icelandic expats 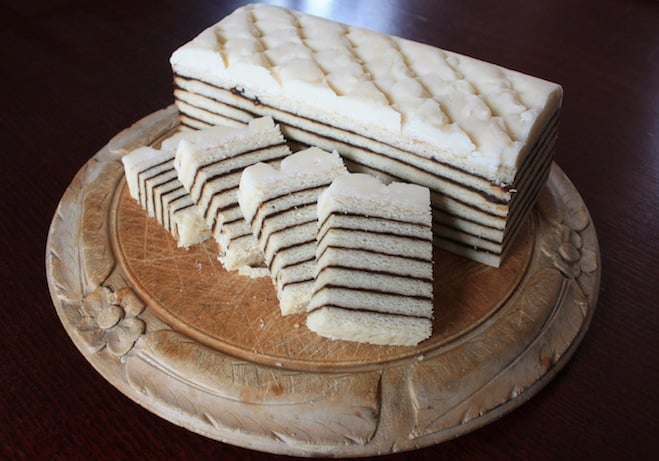 Photograph by Nelson Gerrard, a customer and Icelandic genealogist based in Iceland, who claims Arden Jackson's vinarterta is the best he's ever tasted.

Few Christmas traditions are as culturally sacred to Canada’s ethnic Icelanders – nor as touchy, for that matter – as the baking of a 150-year-old fruitcake.

Vinarterta is a hefty, layered torte customarily served in rectangular slices, usually with coffee, and ideally by a doting Amma (grandmother). In thousands of kitchens across the continent this week, members of the Icelandic diaspora are almost guaranteed to devour the prune-filled, shortbread-layered confection.

But ask a native Icelander in the capital of Reykjavik how one prepares a classic vinarterta and expect a bemused look, and maybe requests to explain what that is. Put the same question to a Manitoban of Icelandic ancestry, though, and you’ll get an earful.

“When I first came to Canada, I was asked by people working with my husband at the University of Manitoba for my special vinarterta recipe,” recalls Margret Björgvinsdóttir, who left Reykjavik for Winnipeg in 1978. “I had to tell them the truth – that I really didn’t know what they were talking about.”

A staple in Icelandic households in Canada and the U.S., vinarterta is all but forgotten back in Iceland. Some even consider the cake to be a quintessentially Canadian treat. (Consider that Katherine Barber, the lexicographer-in-chief at the Oxford University Press, included a “vinarterta” definition in her 2007 phrase guide Only in Canada, You Say: A Treasury of Canadian Language.)

Laurie Bertram, a history and immigration expert who wrote her University of Toronto PhD dissertation on vinarterta’s origins, calls it “an obsession” among North Americans of Icelandic descent.

Baking the torte in some unconventional way can be a provocative act. In Gimli, Manitoba — dubbed the “Heart of New Iceland” for its historically high concentration of Icelandic settlers — subbing any other preserved fruit for prunes in the filling is blasphemy.

As the late Icelandic-American writer Bill Holm put it in his essay about the dessert: “Say Vinarterta in a room full of the descendants of North American Icelandic immigrants and quarrels begin.”

There’s no shortage of debate over the right spice blends (cardamom, almond, cinnamon or vanilla?), the jam filling (rhubarb, prune, strawberry or apricot?), the icing (should it be spiked with bourbon or vodka, or should there be no icing at all?), even the number of layers.

Holm notes that “[in] Canada, Vinarterta is in six or seven layers, flavored with almonds, frosted with butter cream,” but adds his emphatic judgment that such a preparation is “wrong!”

That such a cherished cultural import could go lost in the homeland may seem odd, admits Bertram, considered to be the academic authority on the cake.

“I think for modern Icelanders, vinarterta is confusing. They don’t get what all the big fuss is about,” she says.

Bertram dates the recipe to the 1860s, a time when prunes were a luxury. Without regular stoves, Icelandic families were happy to cook the layered cake over open hearths.

When an unusually long deep freeze around that time sent icebergs into the harbours, crippling the vital fishing industry and blocking shipping routes, a wave of immigrants fled to the New World. The eruption of the volcano Askja compounded the physical and economic isolation, forcing an estimated 25 per cent of the island’s population to seek new lives elsewhere between the 1870s and 1914.

Vinarterta, en vogue at the time, was among the recipes the early Icelandic settlers brought to Canada and other welcoming nations. The 19th-century dish has changed remarkably little since. “Like a culinary time capsule,” Bertram says.

That also explains why Toronto’s Arden Jackson believes some in the community might consider her to be a “heretic” for adapting her Amma’s vinarterta recipe into an haute-cuisine product for sale in Canada and abroad.

Her vanilla icing is spiced with organic Madagascar vanilla beans, infused with Reyka Vodka (an award-winning Icelandic spirit filtered through lava rock and made with glacial water) and the cardamom in her prune jam comes special from an Indian merchant in Southwestern Ontario.

Mouthfuls are sweet, dense and crammed with cardamom and vanilla flavouring.

“Places to buy vinarterta have been few and far between, especially in this part of the country,” says Gail Einarson-McCleery, the Icelandic consul for Ontario. “So I’m really happy that Arden is making it for those of us who don’t necessarily have the time to do it ourselves.”

Bertram, who has sampled Jackson’s original version, endorses it as a faithful reproduction – “up there with the best.” Some curious customers even order it for delivery to Iceland.

Jackson’s twists on the classic vinarterta — chocolate and maple-flavoured versions commissioned by the Lodge at Pine Cove resort in Northern Ontario — are more controversial.

She knows it’s not the most economically viable plan, but it’s her ultimate passion project.

An interior designer by trade, Jackson has for now put her day job on hold while she spends 15 hours a day, every day, baking, packing deliveries and responding to email orders.

“My dream business plan is simple,” she says. “Keep the cake really good because it is really good, and retire as the vinarterta plum fairy.”