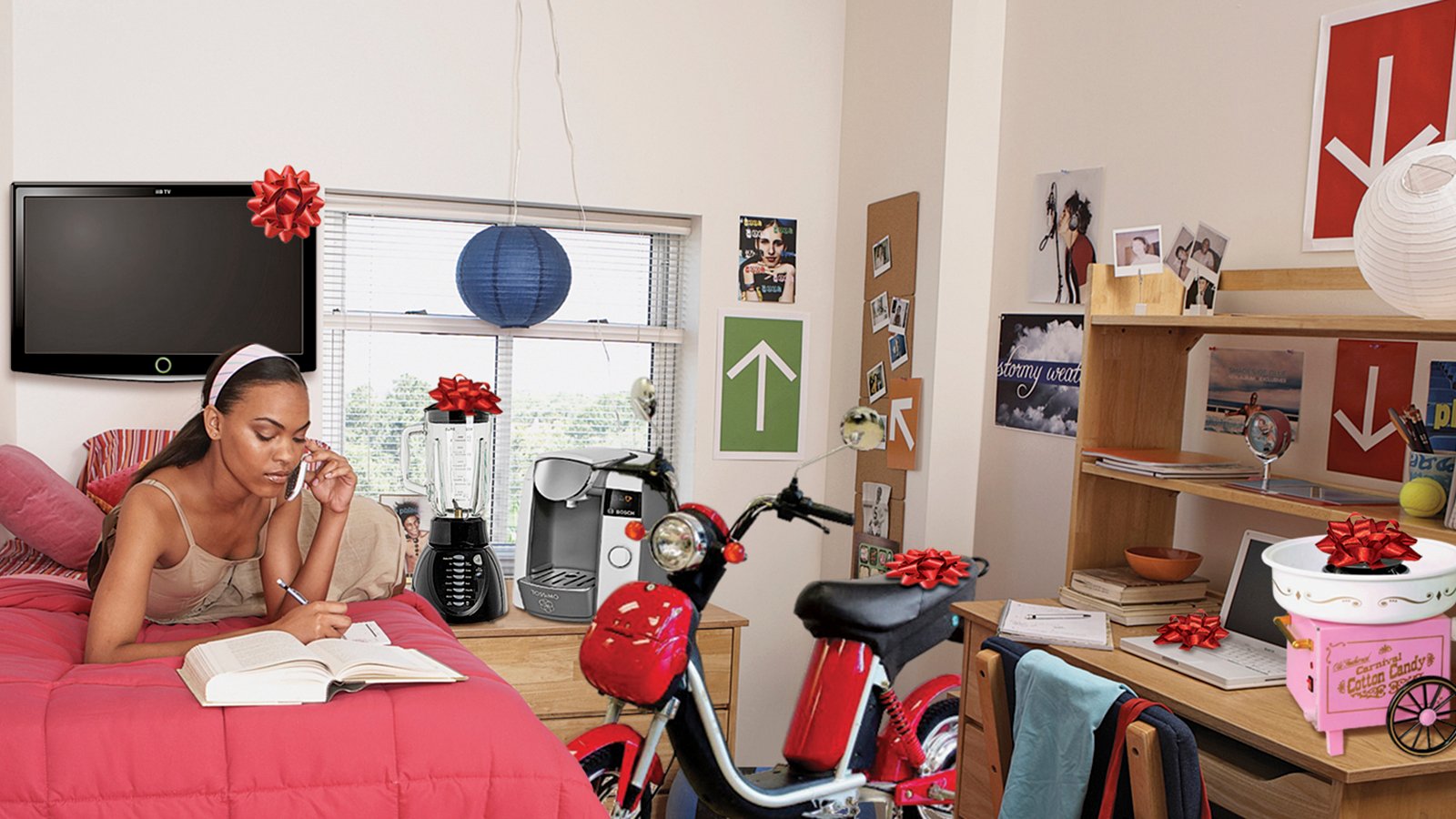 Before 19-year-old Meaghan Vital moved away from home and into a dorm at St. Clair College in Windsor, Ont., she attended a baby shower for her cousin’s wife. As the soon-to-be-mom was opening blankets and onesies from her registry, she turned to Vital with a tip. “She told me there was one for dorms now, too,” says the hairstyling student. Vital headed immediately to TheBay.com and created her own.

Just a few years ago, Vital would likely have been scrounging through her parents’ kitchen for freebies. Now she can benefit from a gift bounty thanks to a plethora of registry options now on the market. The Bay’s include anniversaries and housewarmings, “wish lists” and “holiday lists,” as well as the event option, added quietly in 2012, which Vital was most excited about: “dorm life.”

Gift-giving etiquette and expectations are continually changing, but if anyone had a less-than-positive response to Vital’s list, they were too polite to say so. “I told my mom, and she told all my aunts and uncles and stuff,” she says. “So they could go here for my birthday and Christmas presents and get me exactly what I need.”

For stores, dorm registries are a winning model, a response, perhaps, to the popular phenomenon in the U.S. of “trunk parties,” gatherings held by families before their high school grads head off to college; guests bring gifts of kitchenware, linens and the like. Bed Bath & Beyond allows students and parents to create a registry in their local store and pick up at a location nearby the college (making moving day much easier). In June, Target rolled out its College Registry program in the U.S. Thousands of students have since enrolled, and plans to expand the program into Canada are in the works.

Already there is Wal-Mart’s recently launched a “school supplies list,” a collaborative wish list that both students and their parents can access and manage. “It’s very close to a registry, except that it goes far beyond move-in day and has no specific date or event that goes with it,” says Rick Neuman, director of site experience at Wal-Mart Canada. Thirteen thousand lists have been created at Wal-Mart in the past month, some with as many as 10 “collaborators.” Students here seem more practical in their choices; top products listed are Kraft peanut butter, chunk tuna, loose-leaf paper, pens and pencils and laptops, although Neuman has also seen a seven-speed electric bike, a Zoomer Zuppies Interactive Puppy and one 80-inch flat-screen TV. “Somebody is dreaming big,” he says.

But registry makers should proceed carefully when navigating between needs and wants, says Toronto gift etiquette expert Karen Cleveland. “A registry shows you unequivocally expect a gift, and that’s a gesture of entitlement. No one owes you a gift for taking a step toward adulthood.” But while it’s tempting to see the phenomenon as a cash grab of sorts by the Me Me Me generation, for Millennial and writer Heidi Oran, it’s not so simple. “All registries are created by companies for profit,” she says. “They reflect the commercialization of every event in our lives.”

For students who do register, the same rules apply as for bridal registries: “Have a balance of price points, and spread the word via word of mouth,” says Cleveland. “A mass email is in very bad form.” And don’t be upset with gift-givers who go rogue. In this case, they might know something that you don’t know. “I actually got a lot of things that weren’t on my list but were way more helpful,” says Vital. “I got an electrical frying pan instead of a deep fryer, a Crock-Pot instead of a blender, and a toaster.” She never got her cotton candy machine, but there’s hope. Vital’s left the registry open, just in case.

FILED UNDER: back to school Dormitory Student Life