A stubborn, hard worker, he excelled at sports. Even with arthritis and bad knees, he refused to ease up. 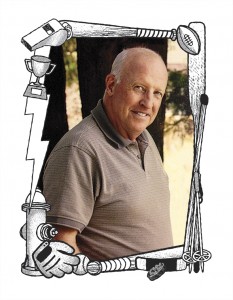 Douglas Bruce Cameron was born in St. Catharines, Ont., on Aug. 16, 1947, to Doug, an office worker, and Doris, a homemaker. Bruce, as everyone called him, was the eldest of three children: Robert followed two years later, while Nancy arrived 11 years after Bruce.

Sports were Bruce’s passion from an early age. With his father pushing him on, he took up hockey and baseball and played them prodigiously before branching out into rowing, football, track and field and, later, skiing. There wasn’t a sport he wouldn’t try, and he was known for his hustle and stubborn resilience. He was quiet and workmanlike on the ﬁeld, but would speak his mind as he saw it off the field—a trait inspired by his grandfather, Arthur Onions, who flew in the Royal Air Force in the First World War, and who Bruce looked up to.

In his last year of high school, Bruce asked Anne McCallum, a sporty classmate whose best friend was his next-door neighbour, to go on a group horseback-riding date. Anne agreed—though she was terrified of the prospect. When she pitched off her horse, falling under a storm of hooves, it was Bruce who grabbed her and spirited her out of harm’s way. “I told him, ‘If you plan to take me on any more horseback-riding dates, you could just find another girl,’ ” she says. They went to see a movie on their second date. They were married three years later.

In high school, Bruce was scouted by American universities, and he accepted an athletic scholarship from New York’s St. Lawrence University, where he played NCAA hockey and baseball. He enjoyed a solid career as a forward—once scoring in a tournament against a hotshot netminder for Cornell University named Ken Dryden.

After graduating in 1971, he went to teachers’ college, and he and Anne eventually worked at schools near the small town of Forest, Ont., where he taught physical education. He earned a reputation as a tough yet passionate teacher and coach. Students nicknamed him Zeus, after he was asked to take on the role of the Greek god for a school play one year.

In 1980, Bruce and Anne bought land on Oxbow Lake in Muskoka, Ont., and he and some friends built a cottage by hand. Three years later, Bruce and Anne had a daughter, Meganne. “He had her in skates and skis by the time she was two,” says Anne. Bruce taught her to swim and hold a bat, and he would coach from the stands. “He’d try to teach me how to figure skate, even though it wasn’t something he had any experience in—I mean, he thought he did,” says Meganne with a laugh.

As he aged, he refused to ease up and pushed himself without complaint, despite arthritis in his hips and his deteriorating athlete’s knees. Bruce and Anne bought property in Arizona, where they spent their winters, and he purchased an ATV to ride in the desert and in Muskoka. He was a volunteer firefighter in Ontario, too, waking up in the middle of the night to attend to fire calls. Last year, just three years after a heart attack, he was lapping his daughter on Whistler’s slopes, Meganne recalls. And he would quietly do the chores, no matter how treacherous: Anne recalls that once, he fell off the roof brushing away snow and branches, refusing to go to the hospital for two days. Doctors later told him he had cracked a few vertebrae. “That’s how he was, and how he was with Meganne, too: ‘Shake it off, tough it out,’ ” said Anne.

Bruce and Anne travelled frequently, and for 10 years the two had been discussing a trip to Newfoundland. At Bruce’s sudden insistence, they went in July for their 45th anniversary. “It was almost like he got an itch or somehow knew that it was now or never,” says Meganne.

On July 31—one week after the pair returned from that long-awaited trip—he spent the day out on his ATV with friends. He had been feeling unwell that week, but chalked it up to his arthritis. That morning, his stomach felt upset, but he shook it off, even stopping off at the fire station to wash his ATV before heading home. It was only after he had watched a baseball game that he admitted that he was in a lot of pain and needed an ambulance—and even then he acted like a firefighter, directing Anne to have the driveway clear and documentation ready for the paramedics. He died the next morning in hospital of a burst aortic aneurysm in his heart. Doctors said it had been pooling blood for some time. He was 66.