So what if Millennials won’t leave the nest?

There’s ample reason to understand, and little reason to panic, about the plight of millennials 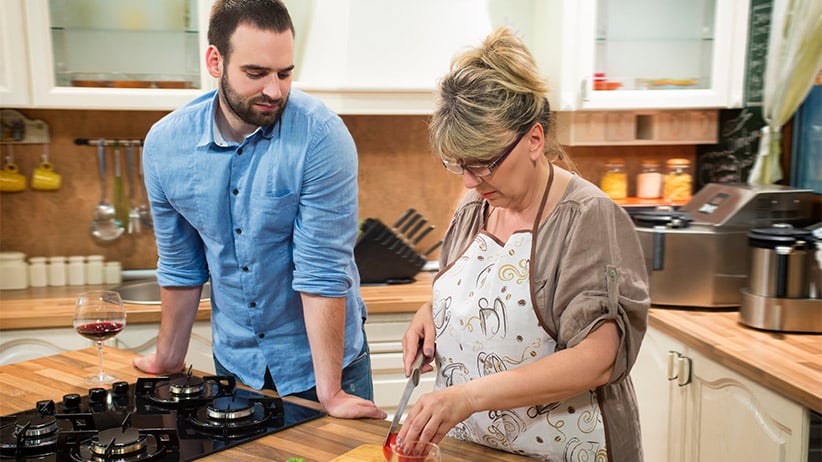 Young man leaning on kitchen counter and watching his mature mother slicing vegetables and making healthy salad in the kitchen at home. (istock)

“You can’t go home again,” warned American novelist Thomas Wolfe. “You can’t go back home to your family, back to your childhood.” He may have been a great writer, but Wolfe is of little use in understanding the 21st-century family. Today, you can go back home whenever you want.

One of the most striking features of modern family arrangements is the irresistible attraction of the parental home for young adults. Since 1981, the percentage of Canadians aged 20 to 29 living with their parents has leapt from 27 per cent to 42 per cent. This group includes those who never left, as well as many who may have flown the nest for school or work, only to return later. And it’s a trend that’s gathering speed among mature youth. The share of 25-to-29-year-olds at home has more than doubled over the past three decades.

This “failure to launch” always attracts sharp debate. It may simply reflect circumstances beyond the control of young adults. Soaring real estate prices, longer and more expensive education and a tough job market have certainly made it more difficult for younger generations to establish their independence. On the other hand, perhaps all those coddled Millennials simply prefer living in a state of perpetual childhood at Chez Mom and Dad. And if this is the case, shouldn’t a national maturity gap worry us all, because it would have important implications for parental retirement and the economy at large?

Last week, Statistics Canada took a close look at this phenomenon, and put to rest fears we’re raising a generation incapable of living on its own—though it did raise a few concerns of its own.

The recent study picks over census data to draw out the social and financial factors that may explain why life in the parental home has become so attractive. Young men, for example, are much more likely to live at home than young women, suggesting a gender—rather than generational—issue. Immigrants and visible minorities, especially Asian and south Asian families, also demonstrate a strong predisposition for living longer in the parental home. “There could be cultural expectations related to parental co-residence that influence particular groups of young men and women in different ways,” the report observes. Other research shows parents who stayed longer in their family home tend to be more welcoming of their own adult children back home, which adds momentum to this trend. A large part of the current situation may thus be explained by steady growth in immigration and an evolving Canadian culture, rather than any failure on the part of younger generations to grow up.

The phenomenon of adult children at home is also more pronounced in big cities where the cost of living is high, such as Toronto and Vancouver. And lengthening expectations of education appears to play a big role as well: almost 60 per cent of twentysomethings attending post-secondary school live with their parents. Both factors suggest a strong financial case for spending more time in the familial abode.

None of the above indicates any reason to worry about generational failure; living at home reflects the changing face of Canada and certain unavoidable financial realities. Plus, a better educated, stable and mature work force is a great advantage to the Canadian economy. Curiously enough, fretting over delayed departure appears to be something of a perpetual pastime. In 1937, for example, a report from the precursor to Statistics Canada observed that “as the age of leaving school becomes higher and higher, it represents a more and more serious problem.” The author worried young people were not reaching “independence” until their nineteenth year. “If the tendency of the last generation continues,” it went on, “they will in comparatively few years still be dependent on parents when reaching their 20s.” Twenty-year-olds still living at home? Somehow we survived.

While StatsCan’s recent report alleviates many concerns, there are still some areas of note. Parental income could play a significant role in facilitating this new life stage, as living at home is obviously a more viable option for families with larger homes and incomes to match. And if this is the case, lower-income Canadians may find themselves shut out of higher-education opportunities or unable to establish themselves in larger metropolitan centres. The ultimate result could be an unwelcome reduction in income mobility and an exacerbation of income inequality. It’s something to keep an eye on.

Finally, given the evolution in social attitudes toward living at home, it may also be time to tweak the behaviour of those on the receiving end of the experience. According to StatsCan, a stunning 90 per cent of adults in their 20s who live with their parents contribute nothing toward household expenses. Perhaps it’s time to chip in. The occasional “thank you” would also be nice.