Why everyone is turning to turmeric

Coffee substitute, vodka infuser, fashion muse: Is there anything turmeric can’t do? 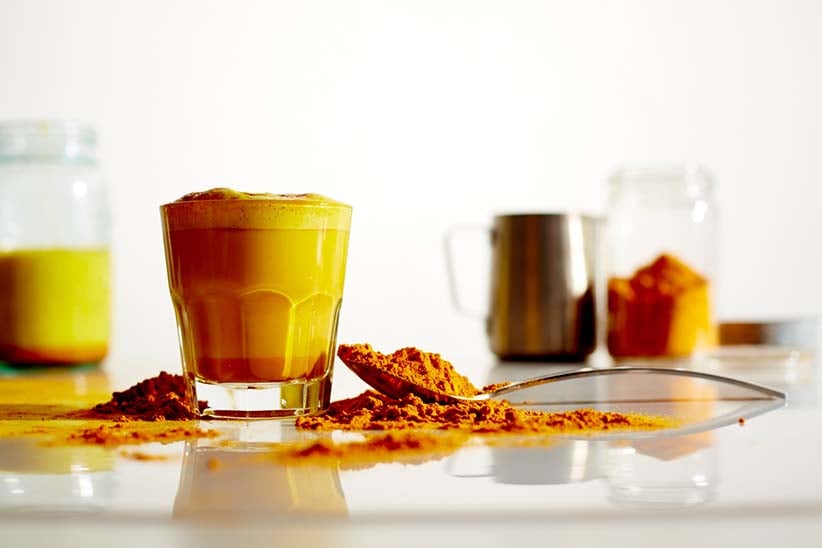 Growing up in an Indian home, if Preena Chauhan ever mentioned she might be coming down with a cold or a sore throat, the first thing her mother would do was reach for the turmeric. A spoonful of the powder, derived from the root of the Curcuma longa plant, would get mixed with a bit of black pepper and honey for her to eat, to nip the cold in the bud. “You looked to your spice box as your medicine chest to put these concoctions together,” Chauhan says. And in that medicine chest, she says, “turmeric is the superspice.”

Chauhan’s long been touting the spice’s health benefits on her blog A Teaspoon of Turmeric and at trade shows with Arvinda’s, a Toronto-based company that sells spice blends for Indian cooking. Lately, though, it’s been less of a sell; turmeric is ubiquitous, and sprouting up in some unlikely places.

Juice companies are giving turmeric front-and-centre real estate on their labels. The Oxley, a British pub in Toronto’s upscale Yorkville neighbourhood, has a turmeric-infused gin on its drinks menu. Vogue has hailed the turmeric tonic smoothie, and when the Capilano Tea House in Vancouver added 2016’s coffee-shop innovation, a turmeric latte, to their menu earlier this year, they didn’t exactly have lofty expectations. Michelle Nahanee, the Capilano’s co-owner, figured they’d sell one or two drinks a week at $5 each, to super health-conscious customers. “I thought it would be a fringe drink,” she says. Much to her surprise, it became wildly popular. Health nuts loved it, but so did her aunt. Nahanee estimates about a quarter of all hot-drinks sold are now turmeric lattes.

We can’t seem to get enough of turmeric. Canada imported nearly 965,000 kg of the stuff in 2015, according to United Nations data, a 26 per cent jump from 2014 and double the amount from 10 years ago. Market research firm Mintel flagged turmeric as a “superfood” of 2016, and online searches for turmeric grew by 56 per cent between November 2015 and January 2016, earning it the distinction of the “top trending functional food” in Google’s 2016 “Food Trends Report.” There are now not only turmeric-infused teas, sodas and, in the case of Tu Me Beverage Co., sports drinks, but British actress Thandie Newton adds it to her moisturizer—she calls turmeric her “secret weapon” to give her skin an extra glow. That’s a claim also exploited in a facial mask by Kiehl’s. The spice’s distinct deep yellow tone is even starting to trend on fashion runways.

How did turmeric become the “it” ingredient? It started with its much-touted health benefits. TV personality Dr. Oz called it “the spice of life” for its ability to “clear out brain-clogging proteins that might lead to Alzheimer’s disease.” Gwyneth Paltrow’s popular lifestyle website Goop.com recently trumpeted its anti-inflammatory properties. Others have linked turmeric to relieving arthritis, fighting leukemia and preventing some types of cancer.

Those claims sound too good to be true, and they just might be. Turmeric’s health benefits are often attributed to the active ingredient curcumin, and while there are studies that support curcumin’s anti-inflammatory or anti-cancer properties, many of these studies were conducted on animals or in vitro. “There is little reliable evidence to support the use of turmeric for any health condition,” according to the National Center for Complementary and Integrative Health, a U.S. federal agency. When Barbara Delage, a scientist with the Linus Pauling Institute’s Micronutrient Information Center at Oregon State University, did a thorough review of the published literature on curcumin, she found little evidence to support it as a miracle ingredient. “Curcumin in humans is not bioavailable, meaning you can eat a lot of curcumin in supplements, but very little if any will reach the blood, let alone tissues,” she says.

But the patina of healthfulness has made turmeric the next wellness fad. Certainly there’s no downside to eating it. That is, other than having your clothing terribly stained by the powder. Chauhan has a easy fix: “I make sure when I’m cooking with turmeric to have yellow on.”