Are those edible bugs actually sustainable?

Just as eating bugs takes off, a new controversy: Are they ethically sourced? 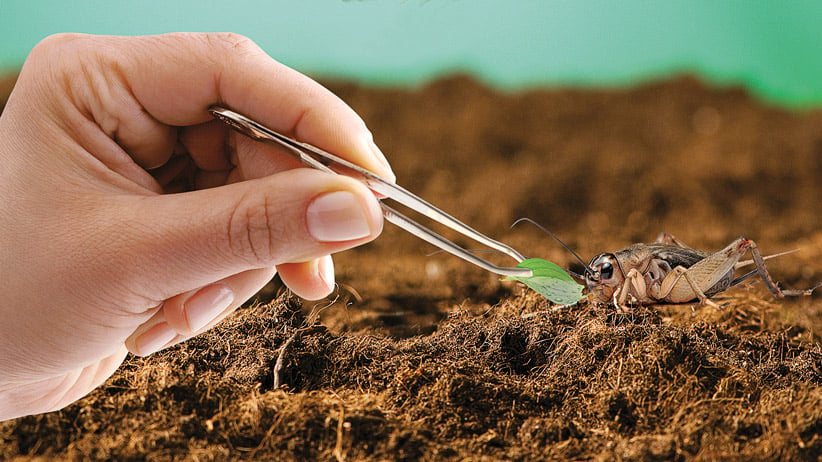 Edible insects are a divisive topic in this part of the world. Are they disgusting or delicious? A fetish item for the daredevil gourmand or a revelatory ingredient for the serious chef? And, beyond taste, are they the future of food—a so-called “sustainable” source of cultivated protein for a growing planet—or best left in the wilds, where they have long thrived?

Ben Reade has a few answers. The reluctant entomologist and Scottish chef knows—by taste—his crickets from his ants and his earthworms from his caterpillars, having travelled the world tasting bugs and researching indigenous food traditions for the restaurant NOMA’s food lab in Copenhagen.

It was a great job, he says, even if he didn’t want to focus on insects, “because everyone has been making a lot of hype about insects and sustainability and most of that hype is crap.” [tweet this]

Reade takes particular umbrage with a widely distributed report published by the UN’s Food and Agriculture Organization (FAO) in 2013 titled Edible Insects: Future Prospects for Food and Feed Security. The tone is unmistakably promotional, and the report suggests that, by 2050, some nine billion people can be fed by insect gathering and rearing, and that “current food production will need to almost double.”

That’s a lot of weight to be carried on the backs of beetles. Insects for human consumption and feeding livestock are already being developed—easily produced sources of protein with tiny footprints, low gas emissions and growing environments that eliminate the need for antibiotics. And yet, while insects have long been a natural part of people’s diets—some two billion of us are consumers of nearly 2,000 species—the push to grow bugs on a mass scale is not nearly off the ground, and is already dividing those who caution ecologically sound sourcing from those working to start up industrial-scale operations. “No one spoke about the fact that, in order to ship those insects around the world, they were mostly being bred in Holland and had to be kept at 28° C—and that’s energy-intensive,” says Reade. “And then they were to be freeze-dried, which is just about the most energy-intensive form of preservation on the planet.” There are reports of fly farms being developed in Africa: One promoter promises an enterprise that would deliver “24 tonnes of larvae and seven tonnes of maggot meal every day” to feed chickens. Cricket farms are on the rise in Canada, the U.S. and Europe, and some pioneering bakers are making chocolate chip cookies and flour with crushed creepy crawlies. At the Insects to Feed the World conference (organized by the FAO) last year, attended by scientists, nutritionists, chefs and government regulators, Reade says there was talk of how crickets could be cultivated, then fractionated and turned into protein, to “feed the world,” and fat—fuel to run your car. “I’m sure there’s something positive that can come of this,” he says, “but if it’s only finances in this quest, then I don’t trust it.” 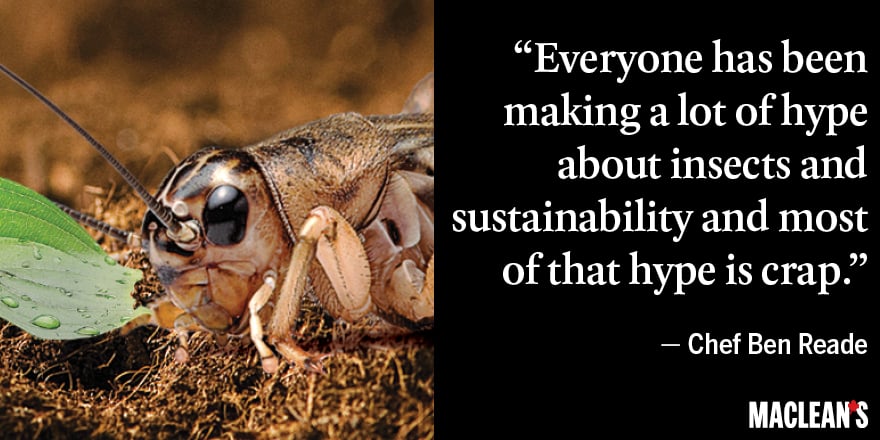 Chef Nathan Isberg, who runs Atlantic, a Toronto restaurant that promotes eating from the bottom of the food chain, found a way to make sure his bugs belonged to the ethical camp by raising them in his own terrarium, feeding them apples and herbs. When he served a risotto sprinkled with his crickets to the Times of London’s notoriously tough food critic, Giles Coren, last spring, Coren concluded the critters “made perfect philosophical sense as an ingredient, and were no more offensive on the teeth and tongue than a dry-roasted peanut.” Yet today, Isberg is serving fewer insects and instead looking to replace them with plant-based foods. “Insects are less and less a realistic response to our current agriculture. Reducing protein consumption would be a better answer,” he says. He sees the new cultivation of insects as “a marketing thing. I think the ethics of it are dubious, at best.”

Reade sees a future for bugs on the plate. But, he says, “These crickets you get from farms—they taste like fish because they’re being fed fish food. So you get a cricket, you feed it fish, and you feed the cricket to the fish and you get a fish. That’s the reality.”