Finding a Southern comfort in an up-and-coming region

Home to the oldest winery in the country, the rising Lake Erie North Shore blends original pioneers with fresh trailblazers

By Erin Henderson and Courtney Henderson May 22, 2014 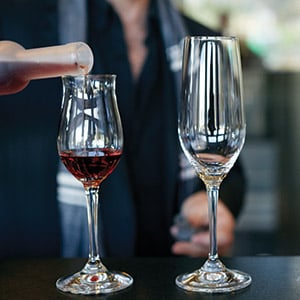 It doesn’t have the fame of Niagara or the hipness of Prince Edward County, but there’s a modest country charm to Lake Erie North Shore, home to the oldest winery in the country.

Sitting on the 42nd parallel—the same latitude as the great wine-growing regions of southern France, northern California, Germany and Spain—there’s a new energy about this wine region 35 km east of Windsor.

Making the four-hour trek west from Toronto on Highway 401, the road narrows to two lanes as the concrete and steel landscape gives way to stretches of farmers’ fields, truck and tractor dealerships and swaths of trees wrapped in cocoons of blossoms.

Turning south onto County Road 27, tractors pull over to graciously allow cars to pass. Farm stands offering fresh-picked fruit, vegetables, eggs and flowers dot the dusty roads en route to Harrow, the town with the heaviest population of wineries, though vineyards are scattered throughout Kingsville, Amherstburg and other rural locales.

Fewer than 20 wineries call Lake Erie North Shore home, the bulk of which have yet to reach their twelfth birthdays, but a handful of pioneers have been here since the early ’80s, including Colio, now one of Canada’s largest wineries (pumping out 340,000 cases a year), and Pelee Island Winery’s mainland location, which was built in 1982 to process the grapes grown on its island vineyards. With winemaking roots reaching back to 1865, Pelee Island Winery can claim to be Canada’s first—and most southernmost—winery. (Until last year, Pelee Island was its own appellation, but with just one winery of the same name, it was absorbed into Lake Erie North Shore, which is still a point of contention for some locals.)

With fertile soils that were once covered by glacial lakes, the stony sediment is good for grape growing. Indeed, this entire area, spanning about 50 km from Leamington to Amherstburg, is a heartland of Ontario agriculture, and 20 per cent of residents make their living farming everything from garden vegetables to corn to soy beans.

The growing season is long and warm, starting about two weeks earlier and ending two weeks later than the rest of Ontario, with average summer temperatures somewhere around 22˚C, thanks to the moderating effects of shallow Lake Erie.

While reference books mention the region’s “slopes”—ranging in height from 172 m to 196 m—this lush land is nearly as flat as the Prairies. With no natural barrier between the lakes surrounding the appellation, Lake Erie North Shore enjoys a beneficial breeze that cools down the vines warmed by the bright sunshine.

In addition to some excellent ice wines and fruit wines, hybrids are popular, with baco noir, marechal foch and vidal and even the esoteric chambourcin winning national awards, as well as vinifera vines like cabernet sauvignon and franc, pinot noir and chardonnay. And a spate of newcomers in the past decade have pioneered new plantings that are attracting attention, among them zinfandel as well as Italian varietals barbera and nebbiolo. Indeed, these are exciting days in Lake Erie North Shore. As they say, a rising tide lifts all boats, and the synergy and spirit shared among pioneering wineries and emerging ones offers a fresh vitality to Ontario’s southernmost wine region.