A German food fair says "nein" to the French delicacy 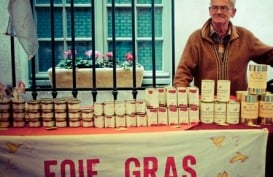 French foie gras makers say they feel like chopped liver after a German food fair decided to ban the French delicacy this year. Producers of the fatty duck and goose liver have accused the biennial Anuga fair of bowing to pressure from animal-rights activists. Its production is banned in several countries because of how it’s made: birds are force-fed grains in a process the French call gavage so that their livers swell to abnormal sizes. But the decision has resulted in a diplomatic spat between the two countries. Ministers have threatened to boycott the Cologne fair, while French Foreign Trade Minister Pierre Lellouche told the German ambassador the fair should drop the ban or else risk disrespecting European law on the free movement of goods.

The sale and production of foie gras is responsible for 35,000 French jobs, Lellouche says, and the ban could have “global repercussions.” But German officials say the issue is up to fair organizers. The controversy has ruffled feathers across France’s political spectrum: the leader of the rural values party, Chasse, Pêche, Nature et Tradition, blamed the dispute on “anti-gavage extremists,” while a Socialist senate member said “it’s like banning German sausages in France.”