How did a self-described 'classical Marxist' with an unfashionable affection for surrealist psychoanalysis become a household name? 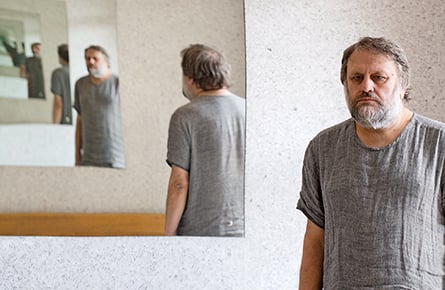 Earlier this month, London’s renowned Royal Opera House revealed the unlikely muse for its 2020 season: the radical leftist and notoriously unkempt Slovenian philosopher Slavoj Žižek. The opera house has commissioned four (four!) new operas inspired by Žižek’s work, which will hit the main stage in seven years. Announcing the news, Britain’s Guardian referred to Žižek (pronounced Gee-gek, both soft Gs, as in regime) as “the most high-profile and controversial public philosopher of our time.”

Elsewhere, Žižek has been called “the Elvis of cultural theory” and the “Borat of philosophy.” More flatteringly, Foreign Policy recently named him among its “top 100 global thinkers.” Almost 25 years after he published his first English-language philosophy text, he has acquired cult icon status. Žižek’s latest film, The Pervert’s Guide to Ideology, debuted last year in Toronto and New York. He published three books in 2012 alone—topping off the more than 50 he has written. His byline is awe-inspiringly ubiquitous—as are Žižekian decryption texts, such as the recent Žižek: A Guide for the Perplexed. There’s even an International Journal of Žižek Studies, edited by Leeds University lecturer Paul Taylor. “Certain stuffy academics had a problem with the journal,” Taylor said. “There seems to be this tradition that people have to be dead before you can study them.” But exceptions are made for Žižek.

How did a self-described “classical Marxist” whose canon includes a 700-page tome on Hegelian dialecticism and who flaunts an unfashionable affection for surrealist psychoanalysis become a household name?

As a young Communist in Ljubljana, capital of the former Yugoslav People’s Republic of Slovenia, Žižek developed a thing for Heidegger—before falling head over intellectual heels for the famously obtuse French surrealist philosophers. He did four years of military service, followed by a stretch of unemployment and a stint at the Slovenian Marxist Centre—before clawing his way into a post at a second-tier university, where he spent the early ’80s writing for alternative magazines. In 1990, he ran for the Slovenian presidency; in national elections, he came fifth.

By then, Žižek had already made a name for himself with 1989’s The Sublime Object of Ideology. Before long, he had popularized his signature blend of high and low culture—and his penchant for dropping theoretical bombshells. In a recent article, Žižek explored “an important aspect of Lacanian theory” as illustrated by 2008’s blockbuster film Kung Fu Panda. In another, he now infamously wrote: “The problem with Hitler was that he was ‘not violent enough,’ his violence was not ‘essential’ enough”—an obscure theoretical argument about violence that many read as anti-Semitism. He believes vegetarians are “degenerates”; he says he cannot follow the TV series Lost because “it’s too intellectual”; he enjoys joking about bestiality and the Balkans. Perhaps that’s why few batted an eyelid when, late last year, news dropped that Žižek and fellow headline-courter Lady Gaga were a romantic item. The story was later debunked—but not before broadsheets worldwide had picked up on it.

Asked in an interview over Skype to account for his unlikely fame, Žižek agreed to try—before taking this author on a gripping, if winding, cerebral tour with long stops at class struggle and the alleged pitfalls of “politically correct cultural studies bulls–t,” and surprise detours in British history (“I was always a fan of Cromwell”), one-night stands (“I can’t!”), and his own films (“shitty”). Žižek said he has never read the International Journal of Žižek Studies: “I can’t look at it; it’s too obscene.” When he’s excited, the philosopher’s trademark affectations reveal themselves: the wild hand movements and tendency to paw at his nose with abandon.

“I’m ambiguous on this,” he finally conceded from his sparse hotel room in Paris, where he’s been hiding out for a week. He thinks his fame has a lot to do with his “return to a more classical Marxism,” which has long since fallen out of academic vogue. “And I’m not afraid to play with dirty jokes!”