From the archives: The rise of Andrew Wiggins 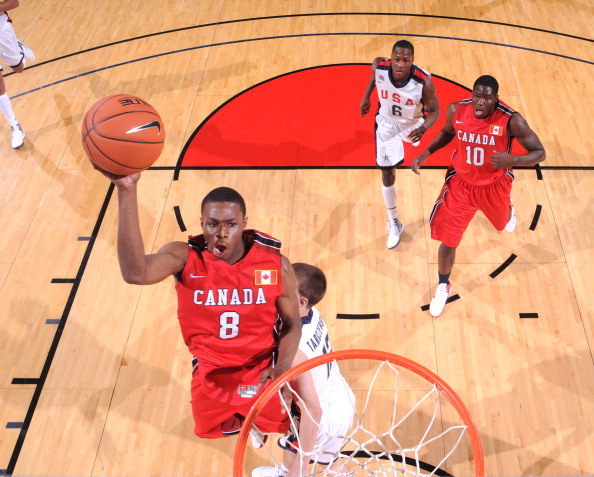 This article originally appeared in Sportsnet magazine in December 2012.

There are 27 seconds left in the fourth quarter of a five-point game at the Charlotte Hoops Challenge when a tall, lanky 17-year-old walks into the stuffy Waddell Academy gymnasium. Suddenly, it seems the outcome of the game doesn’t matter to the crowd of 200; nobody is watching the action on the court anymore. Wearing a black vest over a grey sweatsuit, and a pair of oversized headphones, the kid holds their attention, even though he won’t take the court for nearly two hours. For days now, local media outlets have been touting his arrival. And, as always, a small army of Div. 1 coaches pack the stands to catch a glimpse of the most anticipated college recruit in a generation. That kid is six-foot-nine Thornhill, Ont., native Andrew Wiggins, star of the top-ranked high school basketball team in the U.S., West Virginia’s Huntington Prep, and the No. 1 hoops prospect on the planet.

In the U.S., where high school and collegiate sports are celebrated almost as much as the pros, Wiggins is already a household name. Back home, it’s mainly diehard hoops junkies who know of him, though even casual fans may have heard some of the stories. Like how a 15-year-old Wiggins, two years younger than the competition, led the Canadian cadet team to a bronze medal at a FIBA tournament in 2010, dropping 22 points on a loaded U.S. squad that featured 2012 NBA rookies Michael Kidd-Gilchrist and Bradley Beal. Or the time this past summer when he outjumped the 44-inch measuring tape during vertical testing at a junior national team combine.
Ask the scouts who flock to whatever court he happens to be playing on, and they’ll tell you he’s the most NBA-ready prospect since LeBron James—and that his ceiling is just as high. They’ll say his seven-foot wingspan, explosive first step and deft scoring touch allow him to rack up buckets like Kevin Durant, only Wiggins is a better defender. It all seems a bit much, as if it’s too good to be true that a shy 17-year-old from Thornhill could one day be the biggest basketball star on the planet.
And then you watch him up close.

It only takes a handful of possessions to see that Wiggins is operating on an entirely different level to the nine players around him. Tonight, in Charlotte against Quality Education Academy, those possessions come right off the tip. On his first trip up the floor, Wiggins catches the ball on the left wing and draws a foul on the perimeter. A teammate inbounds the ball and Wiggins cuts to the hoop. With his back to the basket he catches a pass down low, leaps, turns to face the hoop in mid-air and slams it home two-handed over the shoulders of the six-foot-six forward guarding him. His eyes are level with the rim, and he’s still rising as the ball crashes down. Count it, and the foul. He converts the free throw, hustles back on D, skies for a rebound, brings the ball up the court and is fouled while shooting a three. It goes on like that—capped by an emphatic block—until the final buzzer sounds. Wiggins never leaves the floor, playing all 32 minutes.

In the dying seconds of the game—a surprisingly tight 50–40 win that gives Huntington Prep a 35-2 record since Wiggins joined the team last year—he beats his man off the dribble, barely gets his big toe in the paint and takes off, soaring at the rim as the crowd holds its breath, waiting for impact. The dunk would be crazier than anything out of NBA Jam, but Wiggins is undercut and fouled before he can finish. Even when he misses, it’s spectacular. Jaw-dropping aerial attacks like that­­­­­—the result of having an ex-NBA player as a father and a two-time Olympic silver medallist for a mother—have been a part of Wiggins’s game since the eighth grade, when he starred for the Mississauga Monarchs and piqued the interest of those in Canadian basketball circles, including former Team Canada star Rowan Barrett. “Here was a 13-year-old—six-foot-three with length and size—slam-dunking the ball in a way that even pros have difficulty doing,” says Barrett, now the assistant GM of the senior men’s national team. “It was very clear to anyone who knows basketball that we had a phenom on our hands.”

And he’s not going away anytime soon. “You always have the fear that when a young player goes to play in the U.S., it could influence his decision to play for his country in the future. But Andrew’s commitment to the program has never been in question,” says Barrett. Wiggins has proudly donned the Maple Leaf in competition since the age of 14, and is leading the most talented crop of players the country has ever produced (Huntington Prep’s starting lineup alone features three Canadians—Wiggins, his pal Xavier Rathan-Mayes and freshman Montaque Gill-Ceasar, all top-25 recruits), giving Canadian basketball fans legitimate reason to believe Canada can return to the Olympics, and maybe even compete for a medal, as early as 2016.

After the game in Charlotte, Wiggins lingers by the gym’s exit doors as people circle him like planets around the sun. Wide-eyed kids seeking autographs, Tar Heel fans pleading with him to attend North Carolina next season (Wiggins has said he won’t make a decision until the spring, but it’s rumoured he’ll commit to either Florida State, where his father, Mitchell, starred in the ’70s and where Rathan-Mayes is headed, or Kentucky, a breeding ground for one-and-done talent) and other hangers-on who don’t want him to leave until they get their brush with greatness. He’s kind and patient with his fans, though he’s made it clear he wants no part of the circus that follows him from game to game. It’s a big reason why he chose to go to school in Huntington, a small industrial town near the Kentucky border. “It’s really the perfect fit,” says junior national coach Roy Rana, having just returned from a visit. “He can just be a normal kid playing basketball, and that’s how he wants it.” But even in

Huntington, things are beginning to change. Last year, Wiggins’s first home game in a Huntington uniform drew 50 or 60 fans. This year? The nearby Marshall University gym was packed with 1,200 fans.

Yet somehow, Wiggins remains unaffected. “The greatest part of it is that the kid really doesn’t care,” Barrett says with a chuckle. “He’s really uninterested in all the hoopla. He’s already been signing autographs since Grade 8. He just wants to play.” In some ways, Wiggins is an anti-superstar. He doesn’t beat his chest after a big bucket, doesn’t howl at the ceiling after turning opponents into posters. He just goes about his business, happier to let teammates bask in a spotlight that was switched on for him.

It’s clear to the fans at Waddell today, just as it has been to anyone who has seen him play: Barring disaster, Wiggins is guaranteed to be the first overall pick of the 2014 NBA draft—the first Canadian to earn that distinction. Sure, he’s yet to play a college game, and he’s so young that if you brought up Saved by the Bell, he’d ask if you meant The New Class. But the hype is justified. Mark it down: Andrew Wiggins is Canada’s next global superstar, a kid who’s going to blow away the basketball world. Just be glad he’s on our side.