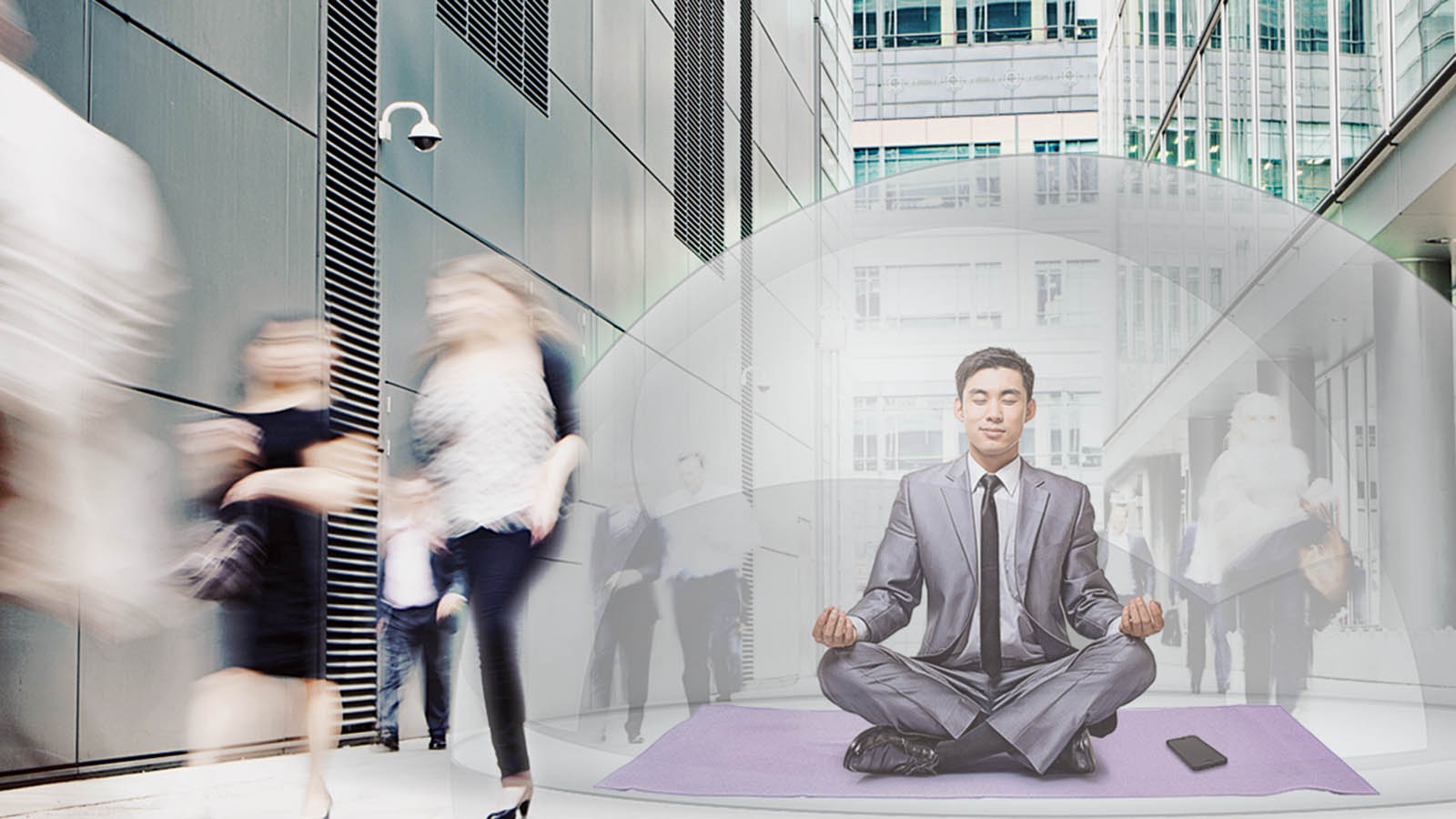 On the phone from Manhattan, Julien Smith can’t find a quiet place to take my call. He’s walking the streets of midtown, chuckling at the irony. “I created the Breather app to solve this exact problem,” he booms into his cell, over the sound of passing trucks, sirens and—is that bongos? “All my Manhattan locations are booked right now.” But for his own success, he’d just go on the free Breather app on his smartphone and rent a private, stylish room for an hour. With each booking, a client gets an entry code to unlock the door. The minimalist rooms are equipped with desk, pens and paper, magazines, a sofa, a yoga mat and free coffee.

Breather is part of the sharing economy, like Zipcar, but it’s also part of the experience economy, such as visiting Disney World and Niketown. Quiet is the commodity. Smith, a Montrealer, announced his start-up at the Le Web conference in London last June, then launched in late 2013 with a test location in Montreal. Now, there are 10 locations in Montreal (renting for $15 per hour) and Manhattan ($25 per hour), with more coming. Smith and his co-founder, Montreal designer Caterina Rizzi, just announced their expansion into Toronto and San Francisco this fall.

Ashley Yue, an English student at McGill University, uses Breather to tuck into The Unabridged Journals of Sylvia Plath. “The libraries are so gloomy,” she says, “and my apartment doesn’t have much light.” Liesl Barrell uses it in Montreal to Skype with her colleagues in Vancouver. “There’s no baggage at Breather,” explains Barrell, a senior business development manager at the tech start-up Unbounce. “There are no dirty dishes in the sink and no clutter.”

It’s the privacy aspect that most impresses Isaac Souweine, who was a general manager for Pollenizer, an Australia-based start-up incubator, before he moved to Montreal last year. “When you’re working with start-ups or developing business strategy, meeting at Starbucks doesn’t cut it,” says Souweine, head of product management at the online clothing store Frank & Oak. “You never know who’s listening or who’s seeing you meet with investors. Discretion is difficult at a corner café.”

Life coach Tina C. Hines, who lives in New Jersey, meets clients at Breather spaces across Manhattan. “I’ve got clients coming to terms with being raped and dealing with serious mother issues,” she says. “If we’re sitting down in public, I can only tap so deep and the clients feel too embarrassed to cry.” Hines is an early adopter in New York, where Breather attracts celebrities rehearsing for films (“No, I will not tell you who,” Smith says, before one can ask), tired shoppers, yogis, consultants, insurance sellers, a hypnotist and even a breastfeeding mom—anyone who wants a quiet moment without having to go home.

Will Breather become known for facilitating another famous “er” noun—the nooner? “Every tech innovation—like Snapchat, say—goes through this phase when people ask about the sex angle,” says Smith, who attracted $1.5 million in seed funding last summer from Montreal-based Real Ventures, with participation from investors Gary Vaynerchuk, Loic Le Meur, Mike Walsh and others. “It hasn’t been a problem.” The rooms don’t have en suite bathrooms or window blinds, and intimate or unlawful encounters are forbidden. Breather is a private club where members can be banned for any undesirable behaviour. (Only one has been so far, for smoking.)

As Breather catches on, one Canadian hotel chain is answering the call for small, chic meeting spaces. ALT Hotels introduced two creative lounges in their Griffintown Montreal location. Named Red and Violet, they’re 250-sq.-foot spaces with WiFi, sofas and designer stools. The seating is arranged in a half octagon, around a screen and writable front wall. Light spills in from floor-to-ceiling windows. “We didn’t want to make mini-boardrooms in the traditional style,” says François Têtu, the hotel’s sales manager.

Back at Breather, much of this is available for people who need just a few hours. Montreal lawyer Jonathan Mongeau uses Breather to focus on a book he’s co-writing after work. “As soon as we walk in,” he says, “it’s down to business. No fooling around.”