Gloria Steinem on Beyoncé, abortion and the Republican Party

The feminist icon on the interconnectivity of social movements 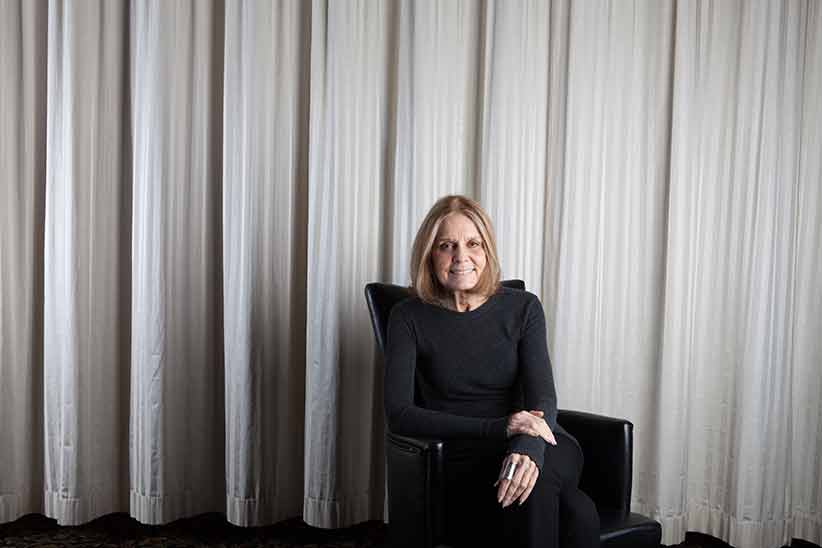 Gloria Steinem portrait after speaking at a fundraiser luncheon for the Holyoke Care Center in Holyoke, MA. (Photograph by Jane Shauck)

Gloria Steinem doesn’t need much introduction. We know her as a leading American feminist, author and activist who came to prominence in the late 1960s—and who, in the decades since, has continued to lead the public conversation about matters of equality. Maclean’s spoke with her on the heels of her most recent book, My Life on the Road, and before her address at the Progress Summit, organized by the Broadbent Institute, in Ottawa in April.

Q: Feminism advocates that men and women should have equal rights—it’s pretty simple. So why has it become such a controversial and divisive word, in your opinion?

A: Some of it is because the word “feminism” is misunderstood, and in the U.S., certainly, a lot of energy has gone into creating that misunderstanding. So the word is seen as being anti-male or some other negative when in fact it means exactly what you just said. And some of it—the more important and deeper part—is because we have been living in cultures in which females were controlled in varying degrees in order to control reproduction. That has produced a notion that there is a particular right gender role in which feminine is supportive and inferior to masculine. So that’s a pretty basic change, and it’s going forward in consciousness; certainly, it probably has a majority support now in [North America], but it still is a big change of actual power structures.

Q: There’s all of this divisiveness about what being a feminist means, but at the same time, a term that’s been bandied around for decades is “post-feminist,” this idea that we are living in a “post-feminist society.”

Q: Is that your take on it?

A: It’s as ridiculous as saying we’re living in a post-racist society. It is simply the new form of obstructionism.

Q: What about the commodification of feminism within pop culture, this idea of the language of empowerment to sell products—which isn’t new: “You’ve come a long way, baby” was evoked to sell cigarettes back in the 1970s.

Q: But we’re also seeing Beyoncé in front of the word “feminist” and Katy Perry selling “feminist” perfume. It is being used to sell Swiffer.

A: Well, I don’t know Beyoncé, but I have the impression that she’s sincere, that she really is a feminist and wanted to put the word out there to make it a good word in a big way by putting it in big letters on the stage, and especially because she was quoting the African novelist Chimamanda Ngozi Adichie who said, “We should all be feminists.” She’s a very accomplished and important novelist.

Q: So that would be an opportunity then, for taking that kind of platform and using it as a critical tool?

A: Yes, yes, right. I’ve only seen one live concert of Beyoncé’s, which was at a benefit in London for funds to support anti-violence groups around the world. Beyoncé came out at the beginning of her performance to this enormous audience of mostly women, and said something like, “You know, I know life is hard but we’re together now, and for the next hour you’re safe.” I was very moved by that.

Q: But the idea that “feminist” has become a mantra within pop culture, in a way that—

A: You know, I don’t want it used to sell cigarettes [laughs], as you point out. And it is not something that you can buy. But it is something that we aspire to, so that the more people who have access to the media, and say that, I think the more our consciousness can change. 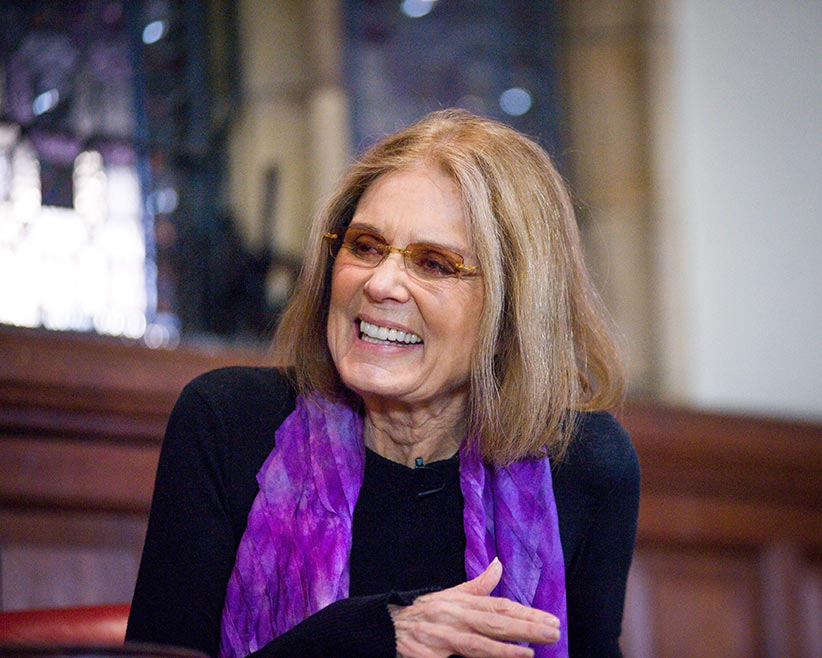 Photo by Roger Askew/REX/Shutterstock (5600478c) Gloria Steinem American feminist, journalist and activist who was recognized as a spokeswoman for the feminist movement in the late 1960s and early 1970s. Speaking at Oxford Union, Oxford, Britain 26th February 2016. Roger Askew/Rex/CP

Q: Access to abortion is very limited in some Canadian provinces, and certainly we see a flurry of new laws in the United States restricting access.

A: It’s because the anti-abortion forces lost in the central government, and because their terrorist tactics—they did murder eight abortion doctors in this country—turned out not to be popular, which I would think would not be a surprise to them but apparently was. They’ve now focused on state legislatures and are trying to close down clinics with impossible architectural demands. They’ve moved to the state legislatures, where the right-wing powers are in control or are greater.

A: No, it is a total risk, I’m just saying that the reason for it is not that the majority of the country agrees with it, the majority of Americans—and Canadians—believe that this is a decision to be made by a woman and her physician, not the government. But the minority forces who oppose safe and legal abortion have moved to a different tactic in a local setting.

A: I do think it’s changed. I felt it strongly at that point because first of all, there was a good alternative—Hillary Clinton and Barack Obama were essentially identical on the issues—and secondly, I think we had just not seen enough women in authority in the outside world. We’ve seen more women in authority and in public life so I do think it’s changed from 2008. But it is still hell, she is still taking enormously unfair criticism constantly. I don’t know how she bears it, I really don’t.

Q: This time we are hearing about a generational schism between older and younger women toward Clinton.

A: The issue those young women may be experiencing [the most] is graduating from college in huge debt. It’s true that Sen. Sanders has been very vocal in advocating free public education. That is a good goal, but a futuristic goal, whereas Hillary Clinton is more likely to be reminding [young women] that they’re going to make a million dollars less on average [than men] over their lifetimes, to pay the debt back—which is not good news [laughs]. She’s suggesting practical remedies—less dramatic-sounding than [Sanders].

Related: Feminism isn’t whatever you want it to be

Q: I have to ask you about your comment on Bill Maher’s show, where you said of young women, “When you’re young, you’re thinking, ‘Where are the boys? The boys are with Bernie.’ ” I was surprised to hear you say that.

A: If I had meant what some people think I had meant, I’d be mad at me, too! [laughs] I was not talking about dating or sex, I was talking about power. Young men and women are for Bernie Sanders because of his focus on college debt. But the host interrupted me at a certain point, and then I was sitting there saying, “No, no, how well do you know me?” It was extremely frustrating to me because I would never demean young women’s political motives, ever.

Q: In your book you say that what defines a violent nation is how violence against women normalizes other forms of violence. I think we are seeing that, sadly, rolling out in the tenor of the rhetoric surrounding Donald Trump’s campaign, the normalization of misogyny and sexism.

A: Yes, I agree. It is very wrong and very dangerous. I believe that most people see it as wrong and dangerous, but of course, he does have support from a very resentful group of people, angry people. Also, he is a brand, people know his name. I’ve noticed that when people are asked why they support him, they say it’s because he’s a successful businessman and therefore he could run the country. Actually, he is not a successful businessman, he is a successful con man. It is like watching the Republican Party self-destruct. Which means that it might be able to reassemble and become what it once was, which is a centrist party. After Lyndon Johnson’s administration passed the Civil Rights Act of 1964, the racist Democrats from the South—beginning with Jesse Helms and then many others—left the Democratic Party and slowly took over the Republican Party. Previously the Republican Party had been better on sex and race than the Democrats, often.

Q: What message is most important to you to communicate right now?

A: In terms of social justice movements, for quite a few years we were—and had to be—in silos. There was the civil rights movement, the women’s movement, the gay and lesbian and transgender movement, the environmental movement. Because when issues and groups first emerge from invisibility, you need to name yourself to determine your issues, to speak with your own voice, to tell your story—there’s no replacement for that. But after that, we begin to see our connections.

Bella Abzug, our great congresswoman from New York City, used to say, “First you have a declaration of independence, then a declaration of interdependence.” I want to talk about the linkages, and the fact that none of these movements is separate. We speak about the environmental movement, and global warming, but we don’t usually connect it to the fact that women all over the globe are being forced to have children they don’t want and can’t care for, and therefore that forced population growth is a root cause of global warming. Or, for instance, we understand the racist tendencies of the minority in this country, but we don’t necessarily talk about why the very same groups [who are] against undocumented immigration are also against safe and legal abortion, and even sex education. Well, you know, it’s because they see this country on the verge of becoming no longer a majority European, American, or white country. So, our movements are linked. There’s no way that you can be a feminist without being an anti-racist because, most women in the world, if there were sexism and racism anywhere, would suffer both. These things can only be uprooted together.