Why Canada can make wine that’s as good as any import, but not as cheaply

Maclean’s tells the story of Canadian wine from coast to coast in words and pictures in Wine in Canada: A Tour of Wine Country. Look for it on newsstands now, or download the app. In the meantime, here’s a sneak peek:

The food was good, the company warm and the wine—both bottles—downright delicious. Carmen’s 2011 cabernet made a fine companion to the glazed pork tenderloin my wife and I served at a recent dinner party: tart, yet replete with that fruitiness Chilean wineries seem to summon without effort. By the halfway point of the meal, we were ready for something more structured, and a bordeaux-style red from Thirty Bench Wine Makers in Beamsville, Ont., served nicely. Austere but silky on the palate, this 2010 wine was discernibly better than the Carmen, which made its $24 price tag easier to swallow. But from an economic standpoint, there was the rub: the Chilean cost $12.55 less.

For every wine lover wishing to support the domestic industry, it’s a persistent fly in the ointment. Buy a good domestic, and you suspect you’ve paid more than you would for an import of comparable quality—or that you might have gotten a transcendent foreign wine for a similar price. It’s especially true of popular reds: Trius 2011 merlot, from the Niagara Region, seems a decent enough deal at $14.95 (in Ontario). But a mere $7.65 will buy a bottle of Cesari, a mass-produced merlot from Italy that tastes about as good. Fans of ripassos will be delighted to hear the Old World technique of fermenting partially dried grapes has made its way to Canada. But the $34.95 price on Cave Spring Winery’s version, “La Penna,” might scare off customers wondering whether it’s as good as the Italian original.

Wine industry leaders call this a perception problem. We’re predisposed, they say, to think homegrown wines are inferior despite the international accolades they’ve been raking in over the past couple of decades. Yet even ardent fans of Okanagan and Niagara wines think it’s time to acknowledge the obvious. “We just cannot make good, cheap wine here,” says David Lawrason, vice-president of WineAlign.com and a judge at the Canadian Wine Awards. “We don’t have the economies of scale. We don’t have the grape supply. I think Canadians need to understand we can actually make some terrific, more expensive wines, that they should support that. As a country we could hang our hat on it.” 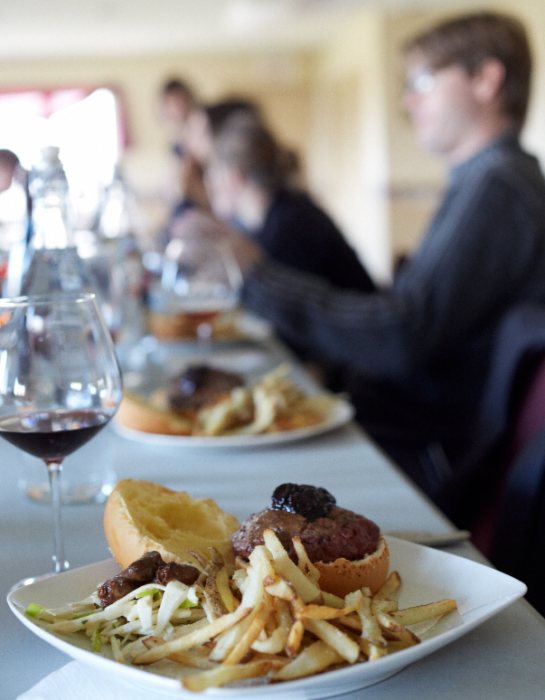 Considering the challenges facing Canadian grape growers, it’s a wonder we have an industry at all. Our 11,000 hectares of vines is less than two per cent of the grape-growing area of France, and four per cent that of the U.S. With about 0.2 per cent of global wine production, Canada has neither the quantity of fruit nor the infrastructure necessary to produce wine as cheaply as Spain or South Africa. And while sommeliers extol wines grown in so-called “marginal climates,” the mass market is a different story. In the late 1990s, worldwide tastes bent toward the fat, jammy reds produced by warm-climate countries at low cost and in vast quantity. Domestic wineries scrambled to replicate the effect. Yet in all but a few southerly locations, Canadian grapes don’t live long enough to amass the sugar content of, say, Australia’s mighty shiraz.

In practically every other facet of the business, there’s a competing country that can do things cheaper. Ontario growers must pay field workers about $15 per hour, which is more than a migrant grape-picker in Argentina makes in a day. (Some large Canadian vineyards save on labour by using automated pickers, but these ungainly, self-propelled implements sell new for about $375,000.) In the Okanagan, grape farmers bid against retirees and property developers for the last available real estate, which has in turn driven the price of existing vineyards to about $150,000 to $200,000 per acre—among the most expensive in the world. The rise of the Canadian dollar has also taken its toll, making wines from Europe and the U.S. cheaper relative to Canadian ones over the last decade. When adjusted for inflation, the price of foreign-made wine sold in Canada has actually declined.

Small wonder, then, that imported wine now represents nearly 70 per cent of the Canadian retail market, up from about 55 per cent in the mid-1990s. Only an overall surge in wine consumption in the last two decades has kept the domestic industry growing, says Aaron Goertzen, an economist with BMO Capital Markets, while the tastes of wine drinkers in this country are moving steadily up-market. Canadian makers now have “an opportunity to produce higher-value products,” Goertzen wrote last fall in a special report on the wine industry, which seems a nice way of saying the best prospects for fine domestic wine lies in making us pay more.

It’s enough to stir the neurotic in us all—a future where buying a cheap, foreign red we know and love exposes us not just as unpatriotic, but unsophisticated. Miles Proden, executive director of the B.C. Wine Institute, rejects the either-or scenarios. Canadians can still buy a decent VQA-approved cabernet for $14 or less, he notes (the VQA, or Vintners Quality Alliance, affirms the wine is made entirely from Canadian-grown grapes; some large producers also sell cheaper wines designated as “cellared in Canada,” but they’re made mostly from imported grapes). And for those willing to pay more, Canadian wineries are producing a wider array of wine types than most competing countries—from award-winning rieslings to gummy shirazes. “In B.C., it’s one of our strengths as an industry that we can provide wine that pairs with almost every different kind of food out there,” Proden says. “We do them all very well.”

Still, there are some in the wine world who think Canadian vintners should focus on the wines they do well and cheaply—and to hell with the flavour of the decade. One such advocate is Billy Munnelly, a self-described bon vivant who writes an influential guide to off-the-shelf wines available in the LCBO. “Our reds are lighter reds,” he shrugs. “They’re like the traditional wines that used to come out of France, and we need to get that message across. We don’t really have steak wines at an everyday price. We don’t really have warm cuddly wines for winter. What we do have is cabernet francs and gamays that are great for starting off your evening, or to have with your pizza in the middle of the week.”

Canada is even better positioned when it comes to whites, critics will tell you. Our rieslings, pinot grises and Gewürztraminers stand up to any in the world, yet hit the $12 to $20 sweet spot on the price scale. Even Vineland Estates 2009 St. Urban riesling, which won a gold medal in its category at last year’s Ontario Wine Awards, sneaks in at a reasonable $19.95, while less-heralded gems can be had for much less. That might not stop me from picking up another bottle of plummy, $11.45 red to go with my next glazed tenderloin. But one shouldn’t dine on red meat alone, and it’s nice to know that, for the right occasion, a Canadian wine can be had for the right price.