He also pays for his own dinners

Is the ‘new chivalry’ movement the fix for the problem of the cheap, self-centred modern male? 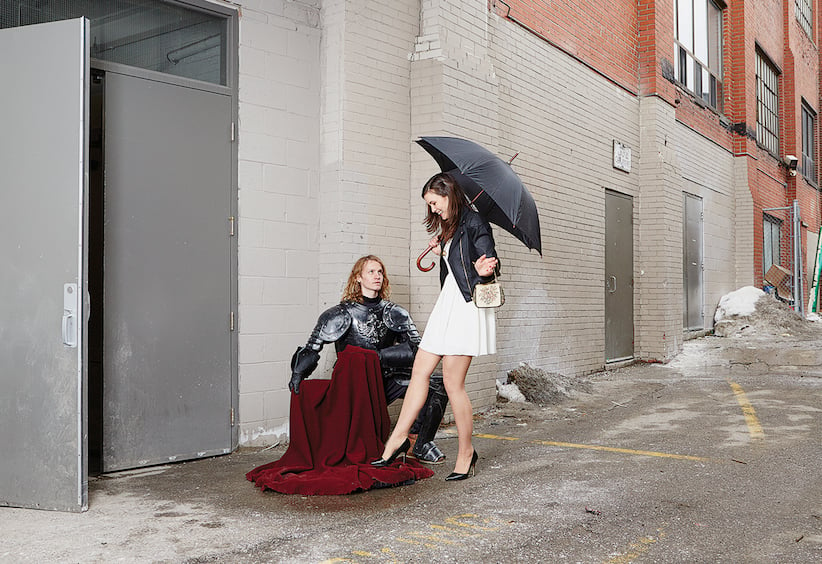 It was Marshall Field, the American department store tycoon, who said, “Give the lady what she wants.” Field died in 1906. His request has since become a progressively hollower ghost of itself. In its place is a new refrain, “Chivalry is dead,” uttered predominantly by women fed up with inconsiderate men and men fed up with demanding women. “If she pays her own rent,” a man might ask, contemplating a dinner date that turned sour after the cheque arrived, “why should I pay for her spaghetti?”

Enter the “new chivalry movement,” a growing online community of men who advocate not only buying a woman spaghetti, but pulling out her chair, and standing when she leaves the table. One of the movement’s de facto leaders is a 28-year-old marketing grad from Boston named James Michael Sama, who looks like a mature Backstreet Boy (his hair is gelled upright, resembling freshly cut grass and he wears a silver chain). A self-proclaimed “modern gentleman,” Sama contends chivalry and feminism can coexist; women deserve equal pay and opportunity, he argues, but men on a first date should “under no circumstances” split the bill. “A respectful woman will offer to pay half,” he writes on his blog. However, he continues, “This is out of courtesy and should never be taken seriously.”

Whether sexist drivel or common sense, this brand of old-school gentleman meets New Age nice guy—a common theme on websites sites like The Good Men Project and Elite Daily—is suddenly massively popular. Sama’s blog, less than a year old, has garnered more than 18 million hits in a matter of months.

Edward Toton, a 41-year-old IT educator from Leesburg, Va. (he goes by “Sir Edward” online) is the founder and administrator of ModernChivalry.org, a forum of “several hundred” chivalry enthusiasts who discuss everything from medieval weaponry to manners. Toton’s chivalry is more progressive than Sama’s; he admits he always offers to pay on a first date, but doesn’t believe there’s anything wrong with splitting the bill. Both, however, are in agreement that, when it comes to common decency, a lot of men have lost their way.

Toton isn’t surprised by survey results (commissioned by insurance company AXA) showing only one in seven men would offer their seat to a woman on a train or bus. According to research by a British company, a woman is 12 per cent more likely than a man to greet a stranger and seven per cent more likely to hold a door open for one. Men are taught that good manners are irrelevant to success, Toton argues. “There has been less emphasis on dressing nice, speaking eloquently and just being gentlemanly.” One look at today’s titans of commerce—Donald Trump, Rupert Murdoch, the Koch Brothers—suggests his theory isn’t without merit. Online dating doesn’t help; in the age of the ubiquitous “dick pic,” a random act of chivalry seems revolutionary.

Perhaps too revolutionary. Jenn Rose, a writer at In the Powder Room, refers to the new chivalry movement as “misogyny wrapped up in a pretty little bow.” She’s not the only feminist commentator to see it that way. But women are unwrapping the bow with apparent glee. Sama’s following is 75 per cent female, and mostly quite positive. He says he gives relationship advice to his readers, and has even helped some leave abusive boyfriends.

Toton believes the popularity of Sama’s blog reflects a male manners chasm in modern life. When American suffragettes Susan B. Anthony and Elizabeth Cady Stanton wrote the axiom “men their rights and nothing more, women their rights and nothing less,” it’s likely they saw basic women’s rights as a metaphorical floor, not a ceiling. It’s unlikely they anticipated a gender-equal world void of gentlemen—and manners. Toton’s hope is that both men and women will realize equality doesn’t mean poor etiquette, and that these romantic gestures, once loaded with sexism, are now benign—common courtesy. In his words: “I’m not holding the door open for you because you need me to. I’m holding the door for you because I’m not an asshole.”