His day job’s at the local nickel mine. The rest of the time, he’s coaching. 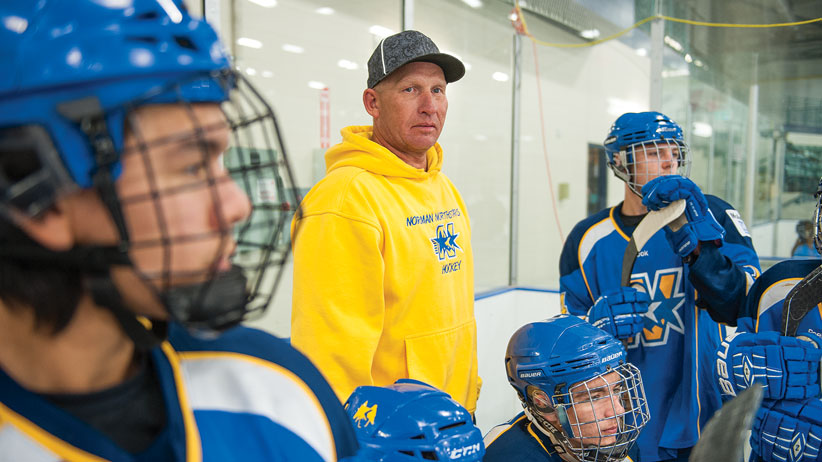 Hometown Hockey, with host Ron MacLean, will be in Thompson on March 7 and 8. The show airs on March 8, on CityTV. For more, visit HometownHockey.com.

It’s just before midnight on a bitterly cold Thursday in Thompson, Man. Doug Korman is loading the Norman Northstars Midget AAA hockey team onto a bus that will take them on an eight-hour pilgrimage south—maybe to Winnipeg or Brandon or even Kenora, Ont. The team will arrive at its destination early the next morning, and Korman will check all his 16- and 17-year-olds into their hotel rooms, try to get them a reasonable breakfast and tell them to get as much sleep as they can until 2:00 that afternoon. That’s when they’ll all rise for a pre-game meal, a thorough chalk talk and a game in the evening. Then it’s back on the bus to another town, another community for another game on Saturday night, then one more town on Sunday afternoon, before they pile onto that bus for the final time and, if it doesn’t break down somewhere along the northern Manitoba highway, head back to Thompson. The boys will arrive home at 3:00 on Monday morning, get what sleep they can, and get up for the first period of school a few hours later, while Korman pulls into work at a nickel mine.

That’s one road trip. In a season, Korman and the Northstars will make seven. And this is the coach’s 21st year doing it. “If I try to think about the number of kids I’ve coached and how many miles I’ve logged on the bus,” Korman says, “it’s completely mind-boggling.”

Korman has been at the helm of the Northstars for so long, he’s begun coaching the children of past players. He’s been to players’ weddings; he’s been around for the births of their kids; he’s given eulogies at their funerals. He’s watched them go on to play junior hockey; he’s seen them become doctors, labourers, RCMP officers; he’s kept in touch with those who came from Native communities surrounding Thompson, and leaned on them as scouts of new talent at their reserves. He’s been all-in with the Northstars since his first year coaching in 1986. Over the decades, he’s stepped away for a year here and there, whether by his own compulsion or because a group of parents thinks he’s too strict. But he’s always found his way back to the team.

He’s running practices twice a week and dry-land training another two days. He’s taking his players to local elementary schools to speak to kids. He’s ferrying others to community appearances. He’s sitting in on his players’ once-a-week tutoring sessions to make sure they keep their noses in their books. “It’s seven days a week—from late August right through until March,” Korman says. “It’s a grind. It’s like having another job.”

And you know he loves it. He’s lived in Thompson since 1965, minus his time playing junior hockey in Saskatchewan and Alberta; his stint at the University of Manitoba, where he played for legendary coach Wayne Fleming; and a three-year spell playing in West Germany when they still had the wall. He’s enamoured with the North—the hunting, the fishing, the way of life. This small mining community of 14,000, where there’s hockey paraphernalia in the windows of all the businesses and everyone in town knows a Northstar when they see him—it’s where he’s meant to be. “I love the game and I love the relationships that I’ve built through it. I love seeing these kids succeed and watching them grow throughout their lives,” Korman says. “And it keeps me young. If I only hung out with a bunch of old guys, I’d get old awfully quick.”