Honey, they shrank the food!

It’s not your imagination: Some of your favourite foods have been downsized at the grocery store, and you're paying the same. 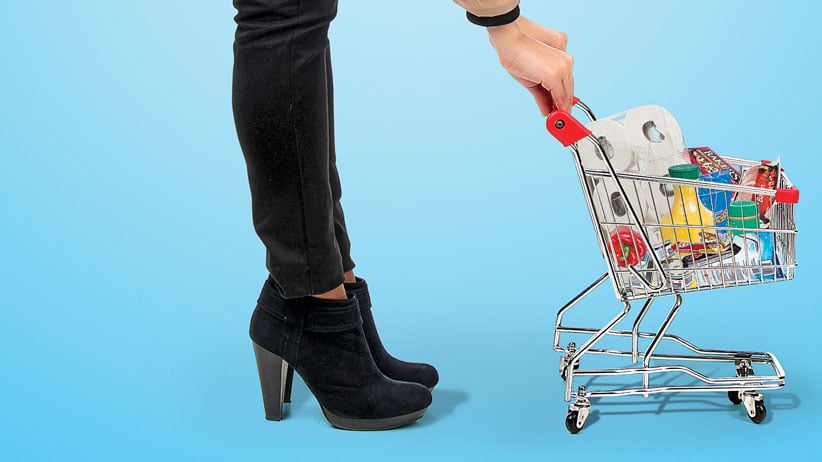 There’s a strange feeling people get when something changes about a regular item on their shopping lists. The package may look the same; the product tastes the same; yet they have the distinct sense that there’s less of it. But where’s the proof? That’s why the editors of the website Consumerist so gleefully called out Borden cheese in the U.S. earlier this month. The manufacturer had shrunk the package from eight to seven ounces, with nary a mention of the change—but for one reference to the original weight left by mistake above the UPC code. It was a rare “gotcha!” moment in a sector that’s been on a diet in recent years, dropping ounces and inches from products without making a fuss or getting much attention.

Some customers do notice. When Jodi Switalski sensed something had changed with her chips, she turned to social media. “Is it just me or did they shrink the bag size AGAIN of the Sun Chips?” she posted on Facebook. Earlier this year, when customers spied smaller Chobani-brand yogourt containers, they, too, flipped out, leaving messages on the American company’s page. And loyal fans of President’s Choice “the Decadent” chocolate chip cookies voiced their suspicions last year. “Is it just me, or do the Decadent chocolate chip cookies now have six fewer cookies per package?” read Chris-Holly Muncey’s post.

Muncey was not alone in feeling something was up with his cookies. “I’ve got to speak to someone about this,” Ken Chisholm wrote on Facebook. Chisholm explained that he had a thing about eating his Decadent cookies cold from the fridge and always stored them in the same rectangular Tupperware container. “When I first started doing this, I was only able to get 30 cookies into it. I then put 12 more into a Ziploc bag,” he wrote. Then, one day, when he went to do his ritual transfer, there were only 28 cookies in a brand-new bag. For this reason, he said, he was swearing off the cookies.

It’s not just chips and cookies. Until this spring, bacon was commonly sold in 500-gram packs. Now it’s 375 grams. Peanut butter used to be sold in a larger jar, there was more orange juice in a container, and cans of tuna were often bigger. And those who monitor the phenomenon complain the size has shrunk—but not the price.

Related reading: Inflation is back and Canadians are about to pay the price

“It’s a sneaky practice,” says Edgar Dworsky, who has been tracking what’s called product downsizing in the United States since the early 1990s on his online resource, Consumer World. “Consumers don’t pay attention. Who can remember every single item you buy?” So Dworsky does it for them, posting before-and-after photos of downsized products on his no-frills website, both to alert customers and to call out companies. He’s found that no aisle in the supermarket is safe; even products such as toilet paper are smaller than they used to be, with sheets being shorter and narrower; the square that a Seinfeld character proclaimed she couldn’t spare for Elaine in a public restroom would be inadequate by today’s measure. And he says a double roll of some paper today is, in fact, smaller than what a regular-sized roll once was.

Dworsky says product shrinking has been going on for a long time. Marketing lore has it that the first item to be shrunk was a candy bar, decades ago when they sold for a dime. Vending machines were built for the coin, so when the cost of ingredients rose and manufacturers wanted to raise the price of a bar, the machine operators protested. Rather than raising the price and changing the machines, the manufacturers changed the bar, instead. 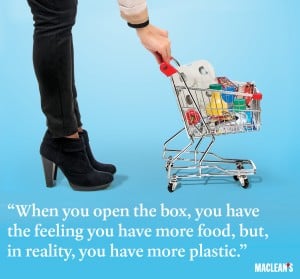 Which is more or less the same reason food producers today say they shrink their packages. While Loblaw could not be reached for comment, its PR team did address disgruntled consumers on social media after the Decadent bag slimmed down. “We recently changed our President’s Choice the Decadent chocolate chip cookies to a 300-gram package so that our customers can continue to get their cookies of choice at the same price,” the company posted on Facebook, citing increased production costs.

In the best sign the strategy works, most consumers don’t spot changes in size. “When you open the box, you have the feeling you have more food, but, in reality, you have more plastic,” said Sylvain Charlebois, a professor of food policy and distribution at the University of Guelph. He recently visited a sausage plant that was experimenting with packaging size. But while it’s easy to jump to the conclusion that the big food company is pulling a fast one on consumers, it’s not so simple. “I would not want to blame food processors,” he said.

In the highly competitive food industry, consumers have dozens of places to shop—from the big-box store to the mom-and-pop shops—and tens of thousands of products to choose from. That keeps prices low at the checkout, but producers still face rising input and production costs. According to Charlebois, changes to food safety standards, investments in research and development of new food products, and climbing prices of commodities, such as corn, soy and wheat, are squeezing processors. Rather than raise prices and risk losing customers, they reduce the size. “They are using a strategy to make a profit. If they don’t make a profit, the consumer loses in the end, because he or she has access to fewer options,” Charlebois says.

Understandably, companies are secretive about downsizing. It’s a matter of consumer psychology, and what’s known as range frequency theory. Tim Silk, a marketing professor at the University of British Columbia’s Sauder School of Business, has developed a study that demonstrates how a range in prices presented to a customer on a shelf affects his or her decision to buy. “When you give people reference points of the range”—such as several similarly priced brands of peanut butter shelved together—“they become more sensitive to changes in price.” That is, people will be more sensitive to an increase in the price of peanut butter if the range is from $4.29 to $4.69 than if it’s from $3.99 to $4.99.

In Canada, price often drives decision-making. “Your mainstream consumer uses it as an overarching guide to value,” says Kenneth Wong, a marketing professor at Queen’s University’s school of business. According to the UN’s Food and Agriculture Organization, Canadians spend a mere 9.6 per cent of household income on food, versus 13.8 per cent in Japan and 10.9 per cent in Germany. (The U.S. is the lowest in the world at 6.6 per cent.) Compared with spending on other consumer goods, it’s a pittance, and it might represent the value we place on food versus, say, smartphones and home renovations. People in countries known for their food culture, such as France and Italy, spend more than twice as much on food than Americans.

“Consumers get the products they deserve,” says Wong. If we resist paying more, producers sacrifice other product qualities to keep prices down. “Economists say we vote every day.”

Related reading: How building a better cupcake may be the grocery wars’ ultimate weapon

If he’s right, Canadians must deserve a better deal. Product changes aren’t always the same here as south of the border. When Häagen-Dazs, owned by Nestlé, changed its U.S. 16-ounce pint to 14 ounces (a move that rival Ben & Jerry’s called out) it didn’t touch the Canadian package. Then there’s Baker’s chocolate, made by Kraft. Not long ago, a baker’s box contained eight one-ounce squares. If you’re American and your recipe calls for that much chocolate, you’ll have to buy two smaller boxes, because the chocolate now comes in four-ounce bars. (Needless to say, they’re not half the price.) Here in Canada, we get the new bars, but can still buy the eight-ounce box. Kathy Murphy, director of corporate affairs, wrote in an email that “it’s simply a case of Kraft Canada doing what makes sense for Canada.” Go figure.

Dworsky says marketers have tricks to distract us from what’s happening. Often, at the same time they shrink a package, they redesign it, promoting the new look. How far can this go? “Thank goodness, when you open a carton of eggs, there’s still a dozen,” he said.

Everything from bacon to toilet paper has gone through a manufacturer’s diet, shedding pounds and inches.