How hygge got hip: Danish coziness becomes the hot craze

More than simple cocooning, the newest lifestyle and design craze is perfect for a time when people are seeking comfort and warmth 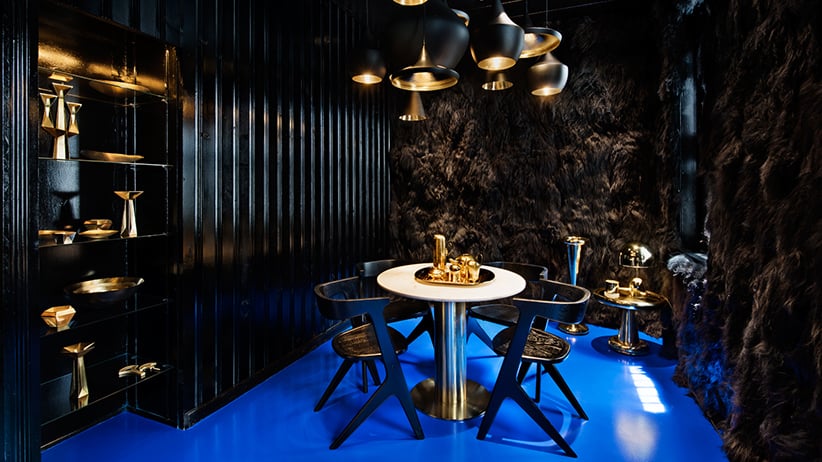 It was no coincidence that people spent the last months of 2016 huddled around their iPads in the security of their homes binge-watching Netflix while the next U.S. president played chicken with democracy on Twitter. For many, escapist comfort was found in season one of The Crown, the visually extravagant retelling of Queen Elizabeth II’s early reign in the 1950s. No surprise there: on one hand, the spectre of a chaotic, authoritarian vulgarian threatening civilization; on the other, a gilt-edged story of a hidebound, self-abnegating woman who always followed the rules, no matter how archaic. Craving a sanitized version of history is logical at a time of larger uncertainty: with history, we know how it will turn out.

But looking back with nostalgia is also part of a larger bunkering moment seen in the booming market for comfort clothing, home decor that swaddles and calms, and a new cleaving to community paired with a desire for escape. Faith Popcorn, the trend prognosticator who famously coined “cocooning” in 1981 now talks of “deep digital cocooning.” People are terrified, she says: “Nobody’s coming up for air. They’re afraid they’re going to get blown up or get caught in something unpleasant.”

Bunkering, like all lifestyle trends, coexists within larger economic and political forces: it’s the personal version of the fear and isolationism writ large in Brexit. Popcorn talks of the new “clanning,” or “hanging out with like types and similar beliefs.” We’re “micro-clanning” too, she says, referring to friends breaking from those with divergent views. There’s lots of road ahead to burrow in further, she believes, citing the arrival of artificial intelligence, and robots as helpers and friends.

Popcorn also speaks of people “anchoring,” or reaching to spiritual roots to prepare for the future. One example she doesn’t mention is the current mania for hygge, the Danish word for feeling of warmth, comfort and shelter—a philosophy of coziness. The how-to hygge (pronounced “hoo-ga”) market is thriving, seen in the arrival of Hygge: The Danish Art of Happiness; The Book of Hygge: The Danish Art of Contentment, Comfort, and Connection; and Fika and Hygge: Comforting Cakes and Bakes from Scandinavia With Love. Cookbook author Bonnie Stern, recently returned from Norway, reports groups of people gathered outside to eat warmed by heaters, with fur blankets over chairs. “There’s no higher praise than to tell someone their house is hyggette,” she says. “It means welcoming; it has nothing to do with decor.” 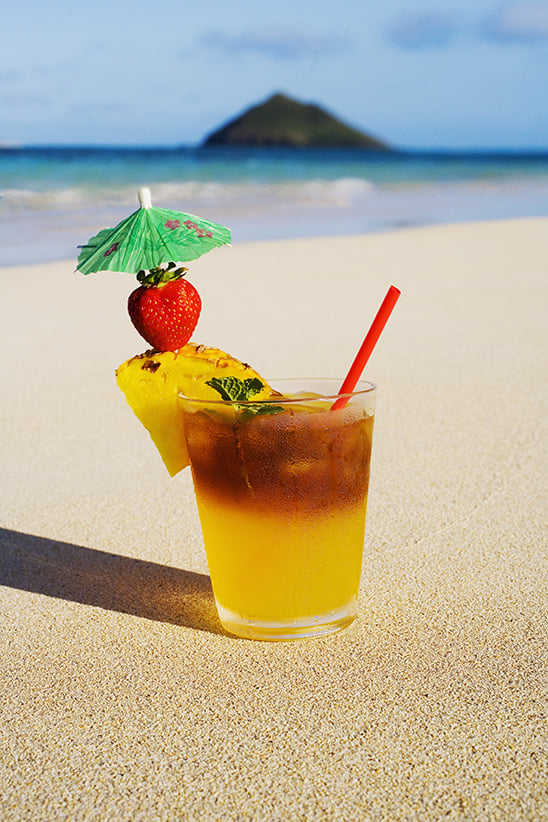 Mai tais and other tiki drinks are back in style. (Design Pics/Tomas del Amo/Getty Images)

Gravitation to community is also manifest in “local” replacing “organic” in food labelling, says Kristen Eppich, food editor of House & Home. That switch is partly rooted in skepticism over what “organic” means, she says. “But more of it is driven by a focus on freshness. People want to know their butcher, their grocer, their grower.” Popcorn speaks of a new “vigilante consumerism” based on the paranoia that saw Trump elected: “People think Big Food is poisoning us, Big Politics is poisoning us.” Eppich sees a desire to be transported by food and drink, pointing to Mad Men-style cocktails being replaced by tiki beverages such as the classic rum-based mai tai. “There’s a sense of escapism as well as whimsy,” she says. “You think beach and holiday.” (Whether the U.S. lifting trade restrictions with Cuba on rum fuelled this trend will fall to economists to discuss.) Eppich also points to selective indulgences. “Fat is no longer a demon,” she says. Popcorn talks in terms of “pleasure revenge” being sought by a “mad as hell” populace. It’s a message consistent with a recent Gallup survey that found Americans are no longer as concerned about trying to lose weight.

And why should they be, given the rise of “athleisure,” the portmanteau that paved the way to $400 Yeezy sweatshirts and $500 Lucas Hugh leggings and saw the end of zippers and waistbands? It’s a sector that’s here to stay, according to Morgan Stanley, which predicts an $83-billion athleisure market by 2020.

Demand for clothes that comfort and swaddle is seen too in the trend for oversized sweaters and knits continuing into spring. Designer Thakoon Panichgul, a favourite of Michelle Obama, presented a multi-purpose knitted item that can be knotted at the neck, draped over the shoulders, even wrapped around the waist. Meanwhile, feet are being kept cozy in fur flip flops and fur-lined slides (Gucci sells a $995 pair for women).

Fur (and faux fur) is central to the “extreme texture” trend exploding in home decor— from shaggy chairs to faux Mongolian lamb poufs, says House & Home publisher Lynda Reeves. The mania for primordial textures began at the high end with the reissue of a whimsical $20,000 Campana Brothers Cipria faux fur sofa in 2015, the same year designer Tom Dixon installed a room lined with faux fur wallpaper in his flagship New York City store. Little did Dixon know he was creating the perfect metaphor: a 21st-century padded cell. Reeves sees “extreme texture” as part of the decor trend of “disruption,” that business buzzword beloved by Millennials who are approaching their peak earning power: “It’s anything that throws you off and makes you look twice,” she says. Just how “disruptive” it will stay now that West Elm sells a $1,699 shearling club chair and Pottery Barn offers $69 fake fur throws remains to be seen.

In both decor and fashion, Tumblr-favourite pink—renamed “blush” or “rose quart”— has become the perfect bunkering colour. We’ve already seen it on Vans Old Skools and the cover art of Drake’s “Hotline Bling.” “It has the power to jolt but it’s also dreamy, young, romantic,” says Reeves. This new pink is definitely not just for girls. The gender association is now fluid, part of its popularity; the hue shows up in men’s clothing on spring runways and the pages of men’s magazines. The fact that pale pink is the ideal hue to control an agitated population is less discussed. Switzerland uses the colour in jails to calm inmates. And Iowa’s Kinnick Stadium painted the visitors’ locker room pink in a bid to try to render its team’s opponents more passive. 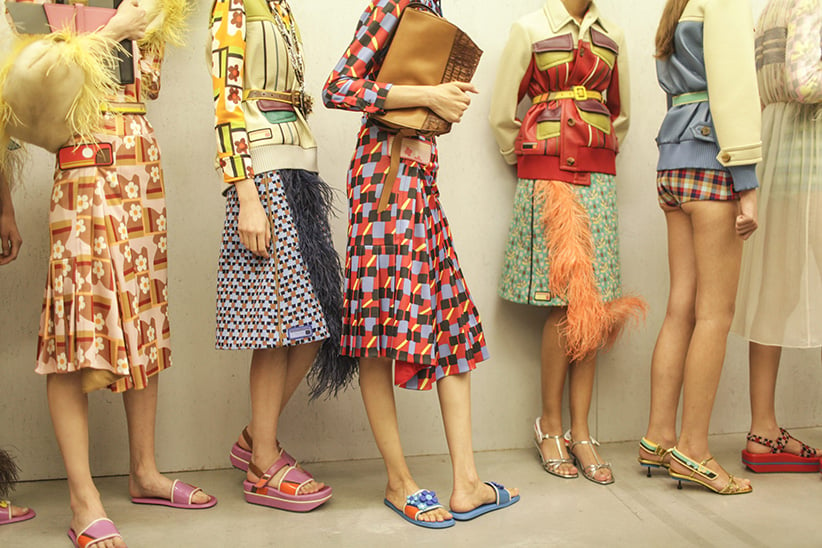 Backstage at Prada Spring Summer during the 2017 at Milan Fashion Week. (WWD/REX/Shutterstock/CP)

Yet along with pink, we’re also seeing a return of the sort of bright colours usually associated with Fisher Price toys. At Paris Fashion Week in October, Balenciaga, Valentino and Céline all trotted out bright, loose midi dresses with coloured tights. Prada’s spring line paid homage to the ’70s, the decade that brought us disco, KC and the Sunshine Band and the TV show Good Times. Clothes were vibrant: red, yellow and blue. The designer also released the coveted women’s shoe of the season: a US$875 sneaker with a weatherproof black neoprene shell and, on the sole, bright pink, red and green appliquéd flowers you’d see on kid’s clothes.

Regression to childhood, of course, continues to fuel the ultimate bunkering activity: the adult colouring book, which is not going away. Ironically, as the masses clamour for royalty porn (up next is the eight-part PBS drama Victoria about the early life of the 19th-century British queen), actual modern monarchs are escaping via “colour therapy,” as adult colouring is known. That, we learned last month, when Prince William told Scottish illustrator Johanna Basford that his wife enjoyed scribbling in Basford’s Secret Garden, thus ensuring that a book that has sold more than a million copies will sell a million more. Basford later explained colouring’s appeal as a way to escape technology: “People are craving a digital detox,” she said. That is part of it. But at a time we’re seeing various measures, among them Freedom House’s index, showing a reduction in global freedoms, as well as people being less concerned about authoritarianism, practising how to stay within the lines isn’t only therapeutic: it’s a new and vital life skill.