How motorists, cyclists and pedestrians can share the road

A handy etiquette guide for a safe and happy summer 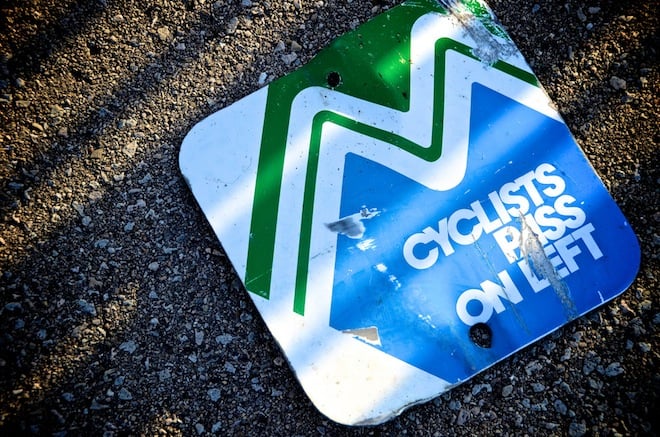 Is it just me, or are motorists finally catching on to the finer intricacies of sharing the road with bicycles? In fact, these days, it feels as though cyclists are causing their fellow two-wheeled commuters the majority of grief.

According to a recent story on the Atlantic’s website, that’s because “bicycling is becoming mainstream.” Numbers are up in Chicago, New York and San Francisco, where “bikes made up 66 per cent of inbound traffic on Market Street in a recent count – and it wasn’t “bike to work day,” when the share rode to 76 percent,” they reported.

With the democratization of the road, author Sarah Goodyear argues, comes a sort of lackadaisical approach by cyclists to the rules. “If every single one of those people got a ticket every time they tried this nonsense,” writes Goodyear of the laws that many cyclists routinely break, “I would be thrilled.”

For the most part, I agree. I’ve been riding my bike to and from work in Toronto for 10 months out of every year since 1998. In those 15 years, I’ve made several observations not only as a cyclist, but also as a motorist and a pedestrian. Here are the top 10 most annoying actions that I witness most days on downtown Toronto roads, followed by handy tips–both decorous and potentially life-saving–to remedy them. The good news is that they’re all so easy to fix, regardless of whether you ride a dirt bike, single-gear, fixed-gear, 10-speed, low-rider or even a mountain bike from 1993 with four-inch-wide tires. Even if you’re a MAMIL (Middle-Aged-Man-in-Lycra), I suspect you’ll glean something here. And I’m sure you’ll be certain to tell me what I left out, right after you get back from your 20-minute bike ride, which took you 25 minutes to get dressed up for (those shorts are capital T Tight!), to the independent coffee shop for a scone and an espresso macchiato.

1. Cyclists: Please don’t wear head phones or talk on your cell phone when riding your bike.

To me, at least, this one seems like such a no-brainer: you know, not operating a vehicle while listening to music via earbuds or headphones, or using one hand to talk on a cell phone. But the number of cyclists I see doing this every day is astounding. Think about it for a second. See? It’s nuts! A fellow bike commuter and colleague told me recently that he’s avoided numerous run-ins with car doors simply by hearing the subtle sound of a door being unlatched. I know Solange is awesome, but would you really want Losing You to be your swan song?

2. Pedestrians: Don’t forget to look both ways when you cross the street!

This one is super easy, not to mention super fun! I remember learning it when I was four. But last Saturday, as I rode my bike along a pedestrian-lined Queen St. West, at least six adults–including one woman with a baby stroller–walked out into the street without looking. When you look both ways, it helps ensure that you’re not walking into the middle of incoming traffic, including both cars and bikes. 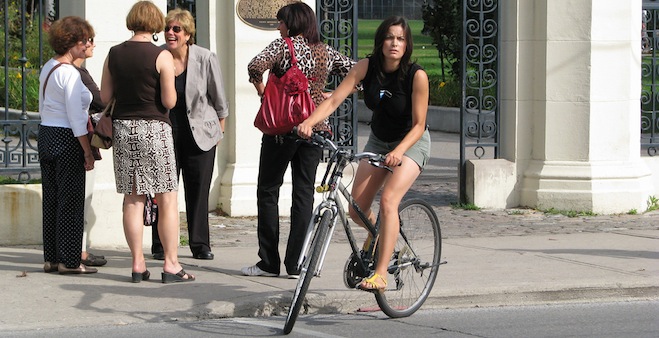 I must admit, I grew up in a small Ontario city where riding your bike on the sidewalk was a given. (Maybe because so few people actually walk on sidewalks in suburbia, because they’re mostly driving everywhere.) But in big Canadian cities, people use sidewalks to walk on. So riding your bike on them is not courteous and you shouldn’t do it in the downtown core, where I’ve seen cyclists do it even when there is a bike lane at their disposal. (Crazy, right?!) Riding on often-abandoned sidewalks north of the city, however, may be another question.

4. Motorists: Don’t honk your horn at cyclists for no reason. That’s noise pollution! And it’s so rude!

Last month, I signaled very carefully into a left-hand turning lane so I could safely make a left turn at a busy intersection, rather than cluttering up the cross walk, which was filled with people. Even though this was perfectly legal –and even though I gave the car behind me plenty of navigating room and notice, he honked at me and flailed his arms. I was confused–did he think I was going to slow him down?–and rattled by this rude, uncivil and unnecessary act.  But instead of returning an undecorous gesture with my hand or face, I simply made my left-hand turn, which coincidentally, was faster than his left-hand turn.

By the by, this video from The Onion does a fine job of demonstrating how pointless honking usually is:

5. Cyclists: When there’s no bike lane, don’t pass motorists on the right.

Oh we’ve all seen this one: the one where a motorist–on a road with no bike lane–signals his intent to turn right and a cyclist riding behind him, who should be watching for cars’ indicator lights, continue to pass him…on the right! Then the cyclists hits the car with his foot or screams swear words, even though the motorist had the right of way. A car wouldn’t pass on the right in this instance. And neither should a courteous cyclist.

Conversely, when there’s a bike lane, some motorists cut off cyclists when turning right. But that bike lane should be thought of as a separate lane of traffic. A shoulder check is therefore required, just as you would do if you were trying to merge into another lane.

Each of these acts is illegal, not to mention rude and potentially dangerous. But in my experience, the majority of Toronto cyclists commit them frequently. Here’s the funny part: these cyclists rarely end up getting farther ahead, so why not just wait for the light to change, the pedestrian to cross or the streetcar doors to close? I usually end up catching up to them and then I pass them in a very “Oh look how far breaking the law got you, jackass” kind of way. I hate being passive aggressive. It’s not healthy behaviour. So cyclists, please just wait. It’s the right thing to do. And it’s super easy!

Bike lights are really effective! They illuminate the path before you when you’re on a dark street and they allow cars to see you and therefore not hit you. Win-win! 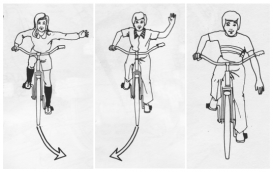 Once in high school, a lucky friend had a car, although the indicators didn’t work. So she had to keep the windows down and use hand signals when she was making a turn. This was embarrassing — at first. But she really came to own those signals and it became pretty cool — in certain crowds, anyway. I always signal. I take great pride in it. It’s not only useful for motorists SO THEY CAN SEE WHICH WAY YOU’RE TURNING but also to fellow bikers–usually the ones that come to a dead halt in a bike lane or along a curb causing you to almost hit them, because bikes have no break lights. A stopping hand signal (see far left) is courteous and cautious! How can you lose?

10. Cyclists: Communicate with each other.

Several years ago while visiting family friends in Bethesda, MA, I rode 10 miles or so into Washington D.C. along an incredible path that wound along the Potomac River. Every biker who passed me, which was many, would say, “On your left” as they did so. I found it a little jarring. But after the first 5,788 bikers breezed on by, I warmed to it. Today, few bikers pass me. Because I’m incredibly fast (and always cautious). But one did recently–presumably, an Olympian–and she said, “On your left.”

“How nice!” I thought. A simple courtesy–and so practical! And easy!