Top chef Carl Heinrich on how to judge blueberry pie

With bonus video of a vibrant moment in blueberry pie eating history. Spoiler alert: Scene may include projectile vomit 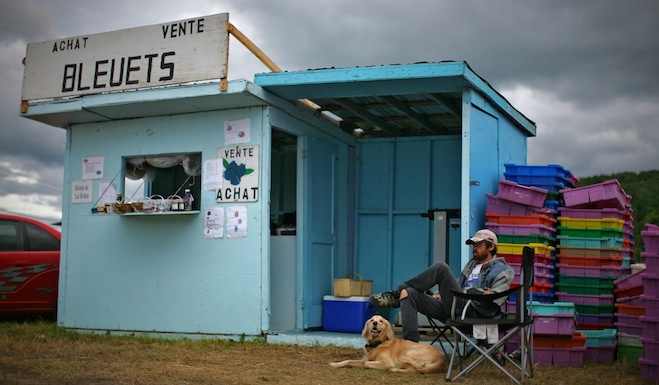 The Boston Globe via Getty

The third annual Wild Blueberry Festival takes place this Saturday at the Evergreen Brick Works in Toronto, which is fitting because August is wild blueberry month for starters, and also Canada produces plenty of them, especially in Quebec, and the Maritimes. It’ll be a day packed full with family activities, live music, a children’s hands-on baking workshop, and, perhaps most importantly, a wild blueberry pie bake-off. One of the judges is chef Carl Heinrich. And although he’s never judged a pie-baking contest before, he knows a thing or two about  having his comestibles judged: He won Top Chef Canada last season. The 27-year-old chef, whose new Toronto restaurant Richmond Station is slated to open in September, spoke with Maclean’s about the intricacies of pie crust pastry and his game plan before the bake-off begins.

Q: What kind of pie did you make [on the second last episode of Top Chef Canada, season two]?

A: It actually had wild blueberries in it. It was a peach and wild blueberry pie and then there was a sort of quiche, made with a duck fat pastry.

Q: Pie-makers are pretty serious about pastry and there are many schools of thought, as you know, about what sort of fat should go in to making the best crust. Do you have an opinion on that?

A: Absolutely. I’ve made all of them and I’ve tasted all of them–there are very few pie crusts that I’ve had that I don’t like. You can’t just say, “This is the one pastry that I’m going to make for the rest of my life,” because they’ve all got their place. In my opinion you need to know how to make all of them properly. You need to know how to make a short crust, a proper lard pastry, a proper pâte brisée and all of these go with a different pie. Let’s say you want to make a nice lemon tart. Well, that requires a pâte brisée–something that is light and stays crisp, you can roll it really thin and acts sort of like a cookie. With a cheesecake, you want more of a flakey–but not too flakey–crust, sort of like a graham cracker crust, that’s more tender, a little bit more crumbly that will stand up to the moisture of the cheesecake. Whereas if you’re going to make an apple pie, you want to use a super flakey lard crust, or shortening, but butter doesn’t even stand up in my opinion.

A: Well for the right apple pie, and that’s just because that’s what I grew up on. My family made pie for Thanksgiving, for Christmas and my grandmother learned it from her mother and passed it down to my mother and now my sister makes pie and I can’t even make pie nearly as good as she can but it was always a lard crust. You need to know how to make a variety of crusts and they all have their place.

Q: Isn’t it funny that when it comes to pie making there’s a certain nostalgia attached to it and we tend to prefer the pies we grew up eating more than a fancy, elaborate slice of pie. It goes back to he basics I suppose.

A: It always goes back to the basics and it doesn’t end at pie–for everything that I cook, even in the kitchen outside of the world of pie. When I want to make a proper coq au vin I always try to nail that chicken that I learned from my chef when I worked in New York. Every time I make that coq au vin I want it taste like that because that, in my opinion, is what it should taste like and if it’s anything else it’s just not right. It’s just not good enough.

Q: You grew up in Sooke, BC. Are there an abundance of wild blueberries there?

A: Actually, there aren’t as many as there are here. My girlfriend has a cottage up in the Ottawa Valley and this time of year you pass by so many stands selling wild blueberries, wild blueberry pies, wild blueberry tarts. And there wasn’t any of that where I grew up from what I can remember. There was an abundance of other things, like blackberries.

Q: So pie growing up for you would have been apple?

Q: Do you remember the scene from Stand By Me?

Q: There’s a scene where the main character [Gordie] is telling a story around the campfire to the boys about a blueberry pie eating contest with a kid nicknamed Lard Ass. And Lard Ass wins the contest, and he ends up throwing up all over the crowd who are chanting, Lard Ass, Lard Ass. I don’t know why I’m telling you this. It’s really not important. That being said, I do think about that scene whenever I hear about a blueberry pie anything.

Q: You’re not nervous about any, well, accidents, I suppose?

A: No, the opposite! I’m super excited about it. I like a good blueberry pie, in general.

Q: But you’re not worried about overeating. Are you going to pace yourself? Do you have a certain strategy going in?

A: I’m going the opposite of pacing myself. I know the goal here is to be, “Oh I’m going to take a little bite and swish it around in my mouth and take a sip of water and tap the crust.” No way. I’m going to go right into it.

For Carl (and not for the faint of heart):