Seriously though, Scott Feschuk explains why it's time to shut down the Gillette razor labs 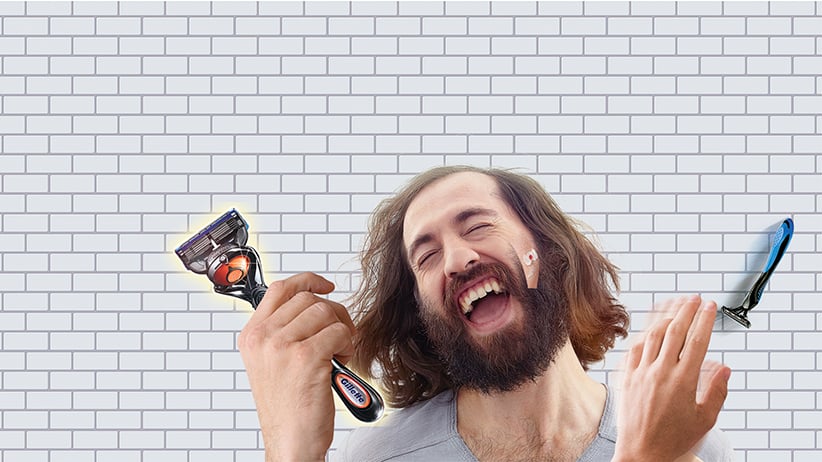 Have you heard the big news? Gillette is promising that its new razor will usher in “an entirely new era in shaving.” Got that? Entirely new. Henceforth, we shall presumably blast away facial stubble with laser cannons or perhaps coax it out using the power of positive thinking. You can do it, Mr. Whisker!

Given the focus of recent advances in shaving technology, you’re probably thinking: more blades. Bet they gave it way more blades. Six blades. Seven. Introducing the Gillette OctoBlade with built-in WiFi and awesome lightning decals along the side!

Gillette says its new Fusion ProGlide razor with FlexBall™ Technology is so powerful that it allows capital letters to be placed in the middle of made-up words. It also apparently “responds to facial contours”—unlike my old razor, which, when confronted by anything other than a perfect 90-degree angle, simply exploded into flames.

According to Gillette, for too long now, men have been burdened with the onerous task of having to “twist their faces in awkward ways” when they shave. You ladies out there don’t know what it’s like. One morning back in ’06, I had to lift my chin slightly. And I know a guy who still suffers from PTSD (post-traumatic shaving disorder) on account of having to scrunch up his nose that one time.

Enter the FlexBall™, which is designed to protect men from the countless perils of moderate head tilting. Speaking with reporters, Gillette’s director of Shave Care R&D said, “Yes, that’s my actual job title. Why are you all laughing?” OK, I made up that quote, but what he actually said was: “I think we’ll look back on today and say, ‘This is when shaving changed again.’ ”

Except here’s the thing, Gillette: You’ve already nailed shaving. Your last two razors were both really great. Unless evolution throws us a curveball, and men’s whiskers abruptly become sentient and develop the ability to deploy countermeasures, we’re good for razors. We can shut down Gillette labs and free up the company’s scientists to devote their intellect to more pressing needs, such as a cure for cancer or whatever makes Billy Corgan sing like that.

But frankly, Gillette’s “breakthrough” fits with the current times. U.S. innovation is in a real slump these days.

For instance, Apple’s corporate strategy for the past few years has been to make a bigger and bigger deal out of smaller and smaller advances. We’re, at most, a few months away from CEO Tim Cook presiding over a three-hour announcement of a software update that will make the yellow icons on your iPhone up to 12 per cent “more yellowy.”

And did you see the new sandwich being touted by Burger King? It’s got two all-beef patties, a special sauce, lettuce, cheese, pickles, onions on a sesame seed bun—so, yeah, it’s a Big Mac. They even call it a Big King, in case you’re too thick to realize it’s a Big Mac. I’m not saying Burger King is going backward with its product development, but we can all look forward to the next new offering on its menu: One Entire Living Cow.

So perhaps it is unsurprising that a company is going to spend $200 million to market a razor that, by its own best estimation, shaves facial hair one-fortieth of one millimetre shorter than before. (Now I can wait an extra six seconds before I shave again. Thanks!)

Sure, some have been hard on the FlexBall™, calling it “a glorified marketing gimmick” and “a dumb novelty.” And sure, I bought one, shaved with it and immediately thought to myself: “Wait, did I just use my old razor by mistake, because this feels exactly like my old razor? Nope, new razor.”

But, on the other hand, the new CEO of Procter & Gamble—which owns the Gillette brand—recently said he sees an opportunity to squeeze more revenue out of the high end of the market for the products that people use every day.

So there is some profoundly American innovation behind this new product after all. The innovation is charging more.